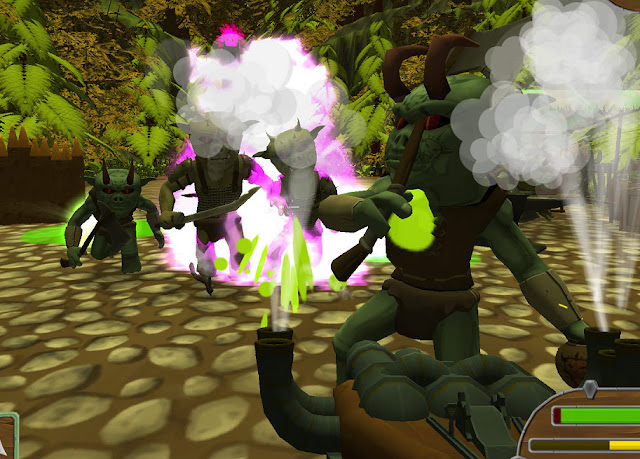 I hope Metacritic doesn’t hate me too much for doing this, because I’m not sure its grading scale actually allows for this, but Orc Slayer is the sorriest excuse for a game that I have ever played, with no exceptions, Yes, that includes stuff like Superman 64 and Ninjabread Man. In that context, half a star is too generous for it. Yep. Orc Slayer is a 0/5 game, through and through, and I am embarrassed for having ever played it.

I get that independent development is difficult, and people often have dream games in mind when they set out to create something, and so they work on that even before they’re in a position to really do that idea justice. I also appreciate that first person shooters are a popular genre and people enjoy creating these games. There are certainly examples of FPS titles developed by independents that manage to do something different to what we see in the mainstream blockbusters, and deserve a look for that reason. Superhot, for example, is absolutely genius in the way that it stops movement when you stop your character moving, allowing for an approach to spaciality that we’ve never seen in shooters before. That game was genuinely innovative and, even if you ultimately prefer more standard shooters, that’s the kind of game that deserves notice from the industry – both developer and players.

And then we come to Orc Slayer. It’s utterly inept from the moment you load it up. Before the gameplay even starts, you’re laboured with a wall of text that introduces the background story, and that’s the first warning flag on just how terrible the whole thing is going to be. The text is presented in one very ugly font, and it’s illegible. Not just because the font is so ugly that after witnessing it I felt the need to claw my eyes out, but also because the text was written by someone who could only be deemed illiterate. I don’t know anything about the development team behind this game, but I’ll give them the benefit of the doubt and assume that Orc Slayer was created by a one-person band, with English as their second language. This has to be the case, else the education system is an utter failure for having produced someone with an understanding of English this delinquent.

Genuine contender for the worst game I have ever played. Review will be fun. #PS4share https://t.co/vYkYeIvgDu pic.twitter.com/QpE2EGCMOw

Either way, there’s no excuse for the text anyway. Here’s a free lesson for independent developers; if English is not the first language of anyone on the team, then hire a professional localiser. If someone in the team is a native English speaker, then great! Get them to write the script. Then pay for a proper editor to read over it. That minor expense, either way, will help convince players that you are professional about what you do. And this is a professional industry. It deserves that much respect from the creators working in it.

Now, I say all that, but not even the best opening script ever written would help this one. Five minutes in to the game, after passing by information signs that I suspect are meant to be tutorials but make no sense whatsoever, you’ll find yourself in the middle of a horde of enemies, and in battling them, that’s about the point where you’ll be wishing for a lobotomy, just so you can escape what you’re witnessing.

In theory I think this game wants to be like Serious Sam, Painkiller, or other high-action arcade shooters. But it just doesn’t work. There’s a limited number of enemies on display at a time, and new enemies have a habit of popping in immediately behind you and start chopping away, with no real chance to avoid them, nor warning that they’re on the way. When you do see one appear, it’s anti-climatic, to say the least. There you are expecting to hear a crack of thunder and bellow as a wild, raging orc comes leaping out of the ether to get at your throat. Instead, there’s a little cloud of magic dust or something that appears and floats around for a moment, and then you’re staring right at the dumb, vacant face of an orc that surely wishes he was in another game – any other game. 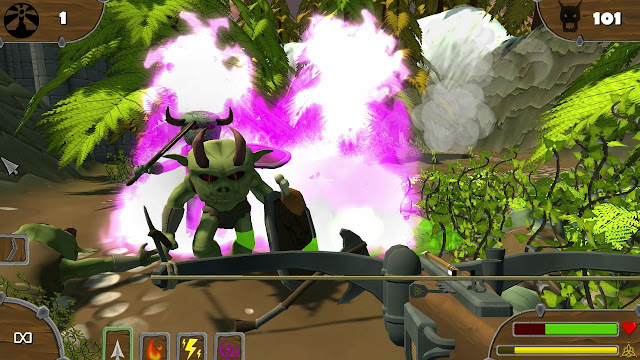 Aiming is clunky and unresponsive, and half the time it doesn’t matter, because the projectiles don’t register as connecting with the enemy, even when firing at it point blank. This is offset though, because on your side is the enemy AI, which is just about non-existent, and enemies will spend half their time with their backs turned to you, ignoring you completely. When they do notice you, they’ll attack, but somehow forget to walk; enemies tend to slide around like the developers forgot to animate certain movement patterns entirely.

There is, in theory, an appealing cartoon world to explore, but level design is spectacularly uninteresting, and as colourful as Orc Slayer tries to be, it’s also so brutally generic as a medieval setting that you’ll not remember a second of it the moment you turn the game off.

Because the hordes of spawning enemies keep coming on, and because they’re difficult to put down, either through the imprecise collision or an excess of health, combat is a real grind too. You’ll come to an area and then strafe around like a madman, trying to thin the horde numbers down, while not really worrying too much about what will happen to your own character, because the enemies are so dumb that’s you really need to be as bad as them for them to do enough damage to knock you out. At least it won’t matter too much that the controls are so sluggish; you are, at least, likely to fire in the correct direction to hit something by pulling the trigger while facing the rough direction of the crowd. Whether the shot registers or not depends on the mood of the game. 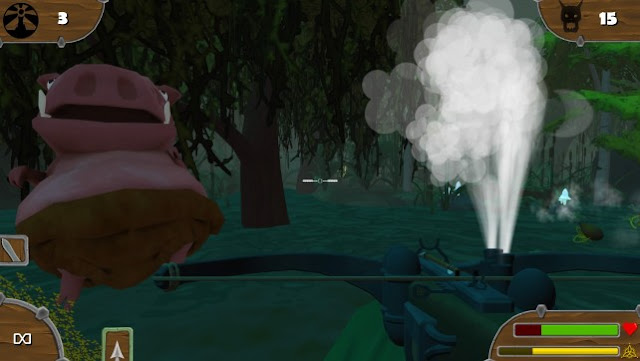 Most damning, however, is that there’s nothing that actually saves Orc Slayer. There’s no real attempt to even do something interesting, different, or creative. This is a game that actively sets out to be a generic FPS with a medieval humans-vs-orcs theme. It doesn’t even try to be a good one. The developers know, surely, that the game isn’t remotely competitive with the better examples of the genre – even in the indie FPS space. That they clearly didn’t care enough about the player to try and do something even slightly different is an absolute insult, and the fact it can’t even get the basics of the genre down means that it deserves no respect from anyone.

Please fill out our reader’s survey! Help us get even better!