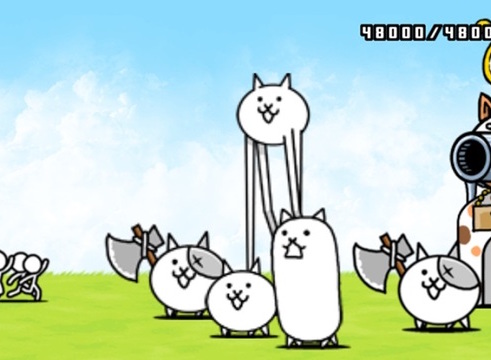 Battle Cats is simple. It’s surreal, crazy, and it’s nuts, but it’s also genuine good fun. It features the kind of simple gameplay loops that mark it out for being a free-to-play title (its original release on mobile), but Battle Cats POP! works as a brilliant little time killer for the Nintendo 3DS at a relatively low up front asking price, and has been able to do away with the free-to-play trappings.

In principle this is a strategy game, but it’s one of those two dimensional strategy games where you don’t actually control the units that you summon. Instead you wait for a resource meter to build up (automatically), and, once you can afford your desired unit, you recruit it, and it will automatically beeline towards the enemy’s base to attack it. If it runs into an enemy unit along the way, they’ll fight until one is defeated.

So the strategy of Battle Cats, such as it is, involves building up swarms better than your opponent. It’s not as simple as we’ve seen in some games, because each unit you can create has a natural counter among the forces that the enemy will send your way, so you’ll need to recruit the right mix of fast, high damaging cats, defensive tank cats, and ranged cats, and you’ll need to do this both aggressively – to push through the enemy line – and defensively, to counter the occasional super-powered unit that the game will throw at you.


The game is broken down into levels, and each level steadily increases the power and range of enemy units. Luckily, after each level, you’ll earn experience points, which you can use to power up your cats, or recruit more powerful ones into your force. On mobile, this process was a bit of a drag, and required a fair amount of grinding to bring your forces to a standard that they’re realistically able to keep up with the enemies of a given level. Or in other words, the game put a drag on progress to try and inspire you to spend money. The 3DS version seems to have rebalanced things so this isn’t the case; I rarely found myself getting stuck this time, and when I did, I could use the “premium currency” cat food to give myself a booster, which is handed out like free candy by simply playing in this version.

It’s impressive just how much more streamlined and engaging games like this and Pac-Man 256 become when the developer can rely on players providing an upfront amount of money in order to be able to play the game. I don’t begrudge developers success with free-to-play games, and I don’t believe that the monetisation model makes these games inferior, but I do like how developers that see potential for their games on console also understand that the straight-up free-to-play model can be tweaked to offer a premium experience that places fewer roadblocks to progress in front of the player.

Let’s forget all the above though, because what Battle Cats is really about is its balls-to-the-wall insanity. As you would have gathered by now, each unit you control has a cat face, but each unit is a weird creature thing with a cat face. The ranged cat looks like something from War of the Worlds, marching into battle on giant insect legs. The tank cat is stretched tall, like a moving bit of wall. There’s bird cats, bull cats, and weirder still. As a horde of them marches into battle against snakes, hippos, and other oddball enemies, a jazzy march tune bounces along merrily in the background. Between battles a cat pops up with sniping insults that seem to have the goal of giving you an existential crisis. Which does sound like something a cat would do, to be fair. The feline bastards. 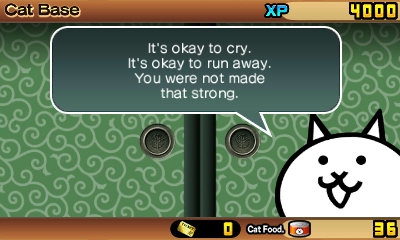 None of it makes sense. None of it is meant to make sense. This is surrealism nonsense in a pure form, and the maelstrom of activity that it creates on the top screen is ridiculously charming for it. Cats, environments, and enemies are all simple in design, but the clash between the monochrome cats and normal enemies, bright, colourful backgrounds, and the occasional coloured-in enemy to designate a particularly powerful foe is both functional in making the action easy to follow, and delightful on the eyes.

Ultimately what sets Battle Cats apart from the many (many) similar games of similar depth and strategy is that hugely creative edge. This game gets to be the distinctive and memorable example of the genre because the artists had the sense to do something that makes no sense, but we end up looking forward to each new level just to see the insanity that it brings. That, right there, is good design principles for mobile gaming, and it translates across to the 3DS perfectly.

Pokemon Go is out, and it could turn into something seriously valuable