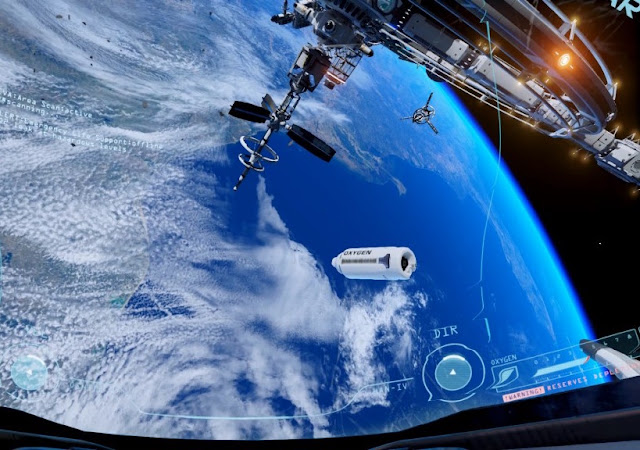 Space can be a beautiful yet frightening place. After waking up to see that the space station Northstar IV has been destroyed, Alex Oshima must piece together what happened and survive long enough to make it back to earth. So… kinda like a video game take on Gravity. Which is good, because Gravity was incredible.

Alex’s EVA suit is damaged and is leaking oxygen and some of its capabilities offline. Alex will have to figure out how to get Northstar IV’s systems up and running so she can use the escape pod to make it back to earth, but this won’t be an easy task. Alex’s EVA suit can thrust her in any direction but due to the damage it has received from the explosion Alex needs to use her previous oxygen to power the thrusters. Moving about takes a little getting use to and even by the end of the game I found myself bumping into things.

While inside the station Alex’s oxygen will not deplete unless she’s using it to move, but outside of the station she will slowly consume oxygen as well, in order to breathe.. Oxygen is refilled by reaching and grabbing a canister – a game-like element that hurts the survival theme that was so intense in Gravity, as these canisters are pretty easy to find as the suit has a search feature that shows all nearby items that can be grabbed. You can also find oxygen stations around to fully refill Alex’s oxygen and unlike the canisters can be used more than once. Other things the search feature can find are audio logs from the other crew members who may all be dead. Other things that can be picked up are data files from the mission and each of the other crew members has an item you can pick up to bring back to earth. 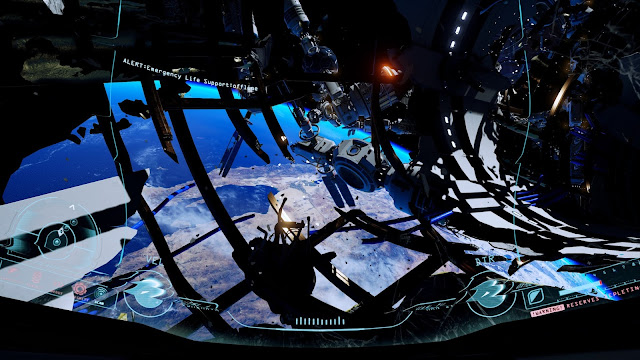 For people looking for an explicit story, it’s those audio logs that will share the story, and through them you learn how the rest of the crew felt about Alex and helps you get even closer to finding out what went wrong. You can also read e-mails from each of the crew’s rooms. Otherwise, Adr1ft tries hard to be the kind of game which tells a story through strong ambient atmosphere, and it’s here that it stumbles a little. To repair the station Alex must travel to different parts of it and perform similar activities each time, which is repetitive and acts to dilute the intensity. Navigating parts of the ship can be tricky as there will be flying debris and in some spots electricity that Alex needs to navigate around. Bumping into things or getting hit by electricity or debris will take some oxygen away and also will add cracks to Alex’s helmet; a cool detail and fitting to the theme, but Alex can find repair stations around that will fully repair the helmet; again letting the theme down by being to “gamey.”

The game uses little music and when it does it adds some tension to the situation. The sound effects are amazing, though. Hearing Alex breathe and her heartbeat adds to the atmosphere of the game, and the voice acting from the other crew members is spot on. Adr1ft also captures the visual impact of being in space beautifully. At times, when you look down at earth, it will be bathed in sunlight, but at other times it will be night, and seeing the earth’s cities glowing in the dark is truly a beautiful sight. Unfortunately these technical feats are let down by the instability of the game. It crashed. A lot. Over 10 times across the short, four hour game, is a bit much and I hope a patch will fix that up in time.

It’s a short game and doesn’t get everything perfect, but it’s also quite unique and has a strong narrative to it. And I do love a game with a strong female lead. This is also a game that feels that it has been released a little early, and by that I mean Adr1ft badly needs to be a strong VR experience when PlayStation VR lands. Then it will truly will be a game that will stick with me for a long time to come.