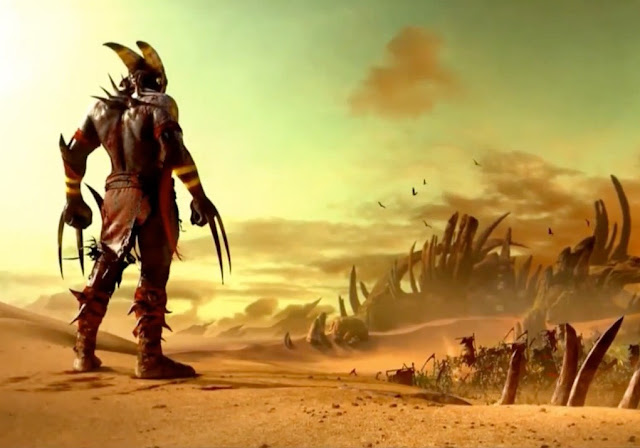 It’s probably inaccurate to consider the original Shadow of the Beast to be a true classic. It’s not really talked about, and rarely (if ever) makes the ‘greatest games’ lists. But it evidently has its fans and heritage, which has lead Heavy Spectrum Entertainment Labs to remake it for the PlayStation 4. This game won’t make those lists, either, but it does have its moments where it offers truly sublime action.

This new Shadow of the Beast aims to be a story-light, narrative-heavy 2D platformer. The basic plot is a simple revenge story. You play as the once-human Beast, magically enslaved by a sorcerer of great power, but who is able to break free after he is driven to kill the father he had as a baby. The newly freed Beast wounds his previous master, and then sets out to hunt him down before he can do the same thing to more children.

It’s a familiar plot, told in just a couple of seconds worth of cut scenes. You’ve seen all this before. What is far more interesting and unique is the world itself. Every so often the camera will shift perspective to give you a view of massive beasts lumbering in the background, or graceful aircraft flying through the sky. Accompanied with an earthy, natural soundtrack, there is a strong contrast between the natural world, and the deeply unnatural things that the sorcerer inflicts on the world (including the Beast himself). This juxtaposition helps to emphasise the sense of primal savagery that the game relies on to develop its core atmosphere. In short, Shadow of the Beast is beautiful and, importantly, it’s beautiful with purpose.

There’s also the most tantalising sense of a world and heritage well beyond what we get from playing the game itself. One boss creature – a twisted woodland insect queen – speaks to the Beast in a unique language before attacking, and upon her defeat is ripped apart by an intriguing, giant, more-skeleton-than-creature titan-beast. A quick dip into the menu pulls up the briefest of backgrounds on how the queen was able to take over the forest and then exploit these titans, the natural residents of the region, to enhance her power and breed her fly-like monster horde. There’s enough world-building work that has gone into the creation of this game that the developers could have easily powered a far more complex plot, and for that reason it’s a little frustrating that the core story of Shadow of the Beast is so limited. Nevertheless, it’s a fine testament to the creative ideas that the development team had that I found myself trawling through the menus to try and understand the game better. I don’t usually do that unless it’s an Elder Scrolls game or comes from Bioware.

For such a world where the natural and unnatural clash so brutally, it makes sense that the actual combat would be razor sharp and savage, and the Beast certainly offers that. With hand claws that look inspired by Wolverine from the Marvel series, the Beast weaves back and forth through combat with agility, before slicing his opponents up with gory precision. For a game that does focus so heavily on its savagery, brawls require a surprising amount of precision; each enemy attacks in a specific pattern, and you need to time counters just perfect or you’re likely to cop a blow in the face. Each new enemy can be frustrating at first, in trying to understand their attack patterns, but once you’ve got the timing down, you’re in for a visceral thrill as the Beast carves his way through hordes of enemies, accompanied by the rhythmic appearance of “perfect” popping up on the screen, telling you how well you’ve been doing.

The Beast also has some spectacular special abilities at his disposal. Some regenerate health, others boost his experience. These abilities consume “blood,” which is built up by defeating enemies. My preference was not to use those special abilities, as satisfying and/or useful as they are, to instead save the blood up for the Beast’s rage mode. Already a cranky fellow, when the Beast consumes all the accumulated blood in one go he gives in to his savagery completely, and can dart back and forth to tear entire groups of creatures to shreds in heartbeats. Mechanically, the function is actually something of a inferior get out of jail free card, as giving in to the savagery doesn’t result in the best scores, but it can get you out of an otherwise overwhelming situation. Personally I was less concerned with the score and simply enjoyed the visceral impact of it.

Unfortunately Shadow of the Beast is over before it really gets going; I had it clocked in at four or so hours, and I was taking my time with it. There is reason to go back to play on a higher difficulty settings, because there are online rankings, and Shadow of the Beast likes being challenging, so moving through those rankings is rewarding. I normally don’t mind shorter games (in fact, I’m busy enough these days that they’re a Godsend), but that comes with the caveat that I expect the game will be a complete experience. A good example of this is Lollipop Chainsaw, another short game at around six hours that I didn’t mind paying full retail price for, because I felt that it had done everything it wanted to in that run time.

Shadow of the Beast, meanwhile, provides closure to the main plot, but leaves the world so underdeveloped that I struggle to see this as something complete. It’s tantalising and interesting, but that ultimately turns to irritation when you realise that unless this enjoys robust sales, the developers are not likely to come back to it to better explore all the stuff that it hints at through its run time.

As a missed opportunity, Shadow of the Beast is a sublime one. The powerful juxtaposition between the Beast, his enemies, and the natural world, is a worthy theme to explore, and the bloodletting that the Beast gets up to is both visceral and entirely appropriate to that theme. That the developers really struggled to explore the concept in any meaningful depth is disappointing, but nonetheless, Shadow of the Beast is ultimately worthwhile.

On King’s Quest: Once Upon a Time (Sony PlayStation 4)