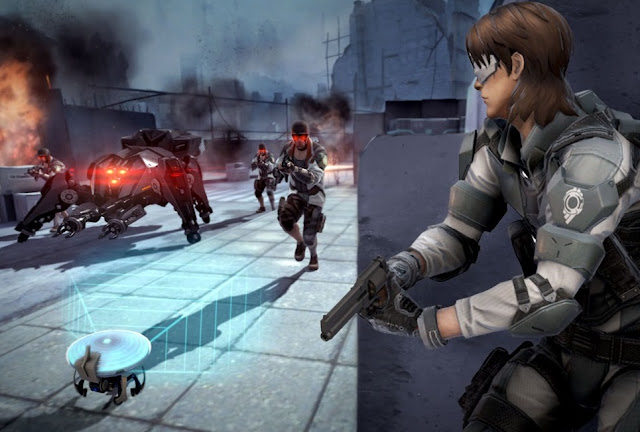 Earlier this week, I had the opportunity to try Ghost in the Shell: First Assault – Stand Alone Complex Online before its early access release in a press demo version. As you can tell by the title the game is based on the crazy-popular Ghost in the Shell Stand Alone Complex anime. Where you might expect an anime tie-in title to be a JRPG or action adventure, this one is an online multiplayer FPS featuring characters and locations from the show.

For the trial I was able to play all three game modes. The first of these game modes is your classic Team Deathmatch, where the team with the most kills by the end of time is the winner. The other two modes are a bit more unique. Terminal Conquest has teams capturing terminals while preventing the other team from doing the same. Once captured a team can use a Tachikoma – a spider-like AI tank – to help aid them in their fight. And “help out” it does – these things do a lot of damage to your enemies. But there’s some risk there, as the Tachikoma are hackable by your enemies, which allows them to turn it back on you.

The last mode is Demolition at the start of a match one of the teams will be put on defense and the other on attack. In attack players must either eliminate all of the opposing team or plant explosives to destroy their assets. In defense players must destroy the other team while defusing any explosives they plant. After a few rounds the game will switch your team from attack to defense or vise versa. There is a total of five maps at this time, but the developers say they will keep improving these maps and add more over time. After each game a player can level up letting them access more characters, weapons, and such. 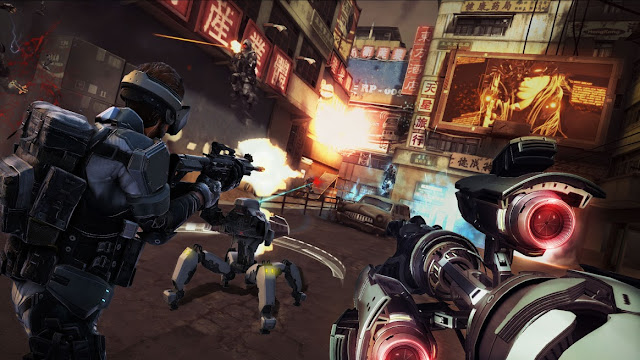 After a game a player will be given three cards at random to choose between. These cards are perks such as character attachments that can make them stronger or faster and such for a limited time. They can also be perks that will give you more money at the end of a match or more experience. Using the in game money you earn, you can shop for new weapons or weapon attachments there was a nice amount of attachments to buy and that was just in the trial version. You can use real money to buy these, but the developers say it is not a case of pay-to-win, and everything available in the game can be earned through play.

There are multiple characters that you can play as once you unlock them using licenses that you get by playing the game and leveling up or you can use an in game currency to buy them. You will also have the option to buy them with real money. Through the demo I played as Paz. Each character has his or her own cyberskill. Paz’s cyberskill once activated allows him to move faster and jump higher. To active a cyberskill a player must get kills to fill up a meter. Each skill has two tiers, and activating a tier two skill makes the skill more powerful allows team mates to skillsync. Skillsyncing plays a major role in winning matches as it requires you to work as a team. When a player skillsyncs into you or you into them it allows you to have their tier one cyberskill for a short time.

Having only an hour with the game seemed too short, because there is a lot of content in this one. From what I did see, however, it seems like a fun team-based FPS where you will have to work as a team if you want to win, and that is something that I do like. As of this writing you can get in on the Early Access through Steam. By playing the game for that short time I could tell the developers had a lot of passion and love for this project hopefully that will translate into an awesome game experience.

The 24 Games of Christmas! Day #16: Kirby and the Rainbow Paintbrush