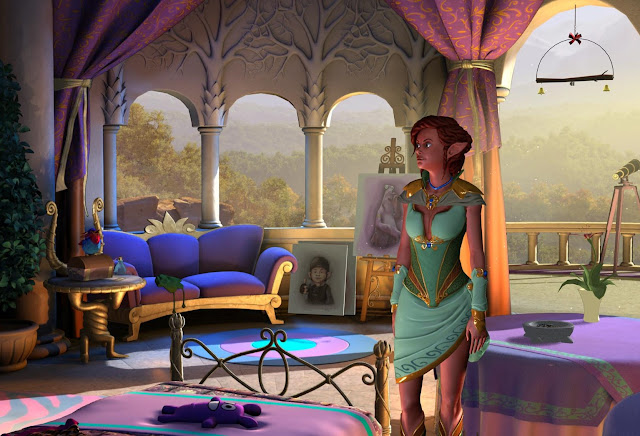 It was just another introduction. There’s a male voice, recounting the previous exploits of his comrades as they saved the world. A little detail here, a snarky remark there, all before finally coming to himself as he declares in a high pitch scream that he has no idea why he’s even talking to himself in the third person! Welcome back to the world of The Book of Unwritten Tales, a point-and-click adventure game that does everything it can to be funny.

From the very outset, The Book of Unwritten Tales 2 sets itself up as a comedy that flits between more traditional genres of comedy, while also dipping its toes into darker fare at times. That humour is the key appeal of the game, with the gameplay itself being quite standard for genre. Keeping the controls simple, players can move their character around an area map with no more effort than pushing the thumbstick in the direction that they wish to explore. Simple right? The game also gives you an even easier way to explore the gorgeous environments.Regardless of the character in play, a simple press of a button will bring up any and all explorable points of interest that can either be looked at or manipulated which, followed by a click to explore that option, will automatically move the character for you without having to touch the thumbstick.

Interactive points of interest come in many flavours. Some exist solely to give the player a chuckle; such as a library with plenty of Easter eggs nods to everything from Final Fantasy and Minecraft to the Dragon Eggs of Game of Thrones. Others however are more important to progress through the game. I liked how the game threw red herrings into the mix, in providing items that clog up the inventory without necessarily being useful. Most modern games condition players to assume that everything they come across through the adventure is important in some way, so it’s quite fun to be left wondering what an item will eventually be used for… or whether it’s useful at all. And at other times a single item needs to be broken down into its components before it can be useful. A good part of the game’s mental challenge is in the manipulation, construction and deconstruction of these items, which means finding each new one comes with it a sense of intrigue and enquiry. 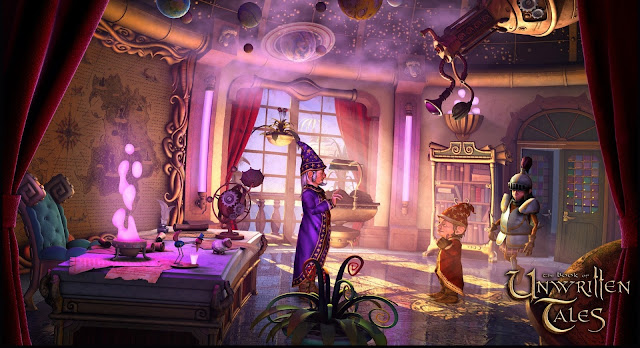 Because the gameplay is so simple, the success of The Book of Unwritten Tales 2 relies on its narrative and, specifically, its quirky dialogue. It is not to say that the system is in any way lacking – if anything it is better than most – it just doesn’t have any bells and whistles. But it is just as well that the true shine comes from the voice tracks, which for an indie point and click title really do a remarkable job at conveying nuance and emotion where need by.

The Book of Unwritten Tales 2 is a fairly standard point and click game, but it is also a wonderfully written and fundamentally enjoyable adventure that will appeal to both genre veterans, and people simply looking to a good, clean, fun little title.