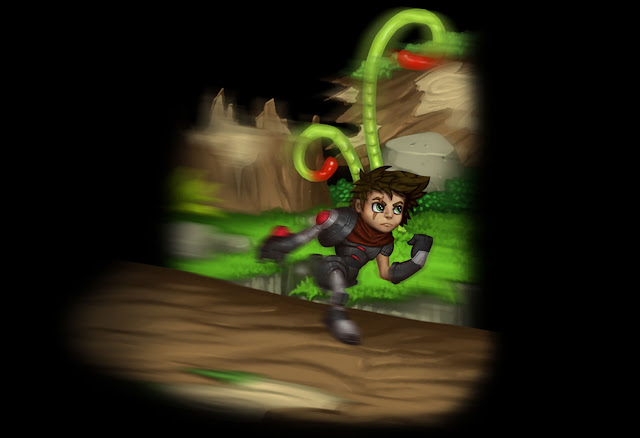 There are some games that are simply brilliant in their presentation, and get away with a weaker premise on that basis. Other games present amazing ideas but fall a bit short in the implementation. Aero’s Quest is the latter. It has a great concept but the implementation felt somewhat off.

Aero’s Quest’s story is a dark one. Aero and his love Ariella live in a forest far from the tyranny of an evil android, Andraus, who would have Ariella and her love for himself. Andraus kidnaps Ariella, not unlike Bowser whisking Peach away, but unlike Bowser he also takes Aero. Literally taking Aero apart piece by piece and breaking Ariella’s heart as she watches Andraus replaces flesh with metal, Aero is thrown back into the forest where he was abducted from. Keeping Ariella for himself, Andrus will taunt Aero making him have to prove his love as he makes it through various obstacles and terrains to make it back to Ariella.

This is part of where things didn’t seem to mesh. For a love so complete as to go as far to say as they complete each other, why would Aero have to re-prove his love now that he’s a machine? Sure the poor guy has been torn apart and put back together through some other’s evil machinations but why would that affect the feelings of the one that loves him? Even if she somehow thought that he blamed her for what happened to him, wouldn’t that thought simply disappear as he chases after her? The developers have created a poor motivation to contextualise this adventure when they could have used a more standard motivation. The whole “Peach being captured” deal is a cliche, but it could have been worked mixed with this game’s darker themes. 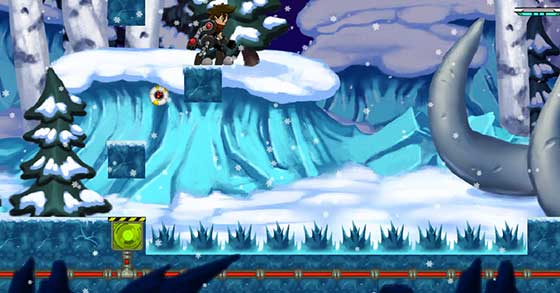 Narrative aside, Aero’s Quest is a fast paced puzzle platformer that works in stages. Each stage has a downwards counter that doesn’t leave much time for thinking things through but instead forcing the player to figure things out on the fly. While the first few stages are smooth and straightforward, that might lead players into a false sense of security, because soon enough Aero is going to have trouble making it through each stage. While the controls are very responsive, they go back to an earlier form of platforming making players have to have pixel-perfect accuracy in the later levels.

Using the base of a 2D platformer, each stage tasks Aero with triggering all of the switches in a level in order to open the cell that in which Andraus is keeping Ariella. This is the perfect example of how he plans on breaking Aero’s resolve; by having him continuously come close to getting Ariella back only to have her taken away at the last second. That is of course if Aero even manages to make it that far. Stages use a variety of things that we’ve seen over the years such as spikes, crumbling terrain, flying robots that will shred you to pieces, falling spike platforms, and so on. All of these elements work in perfect conjunction with the solid jumping mechanics for a great platforming experience.

Following through on the fast paced puzzle platforming are various upgrades that can be picked up in certain stages. Extra speed, higher jumping capabilities, and slowing down time are elements that Aero will come across when they are necessary and using them to the fullest is a must if some of the obstacles are going to be conquered. Despite these powerups, every player knows that at one point or another there’s going to be a moment where something went wrong and Aero is going to die. It’s in these moment that the sheer brutality of the death animations shocked me. This says a lot considering that Mortal Kombat Fatalities don’t really faze me. 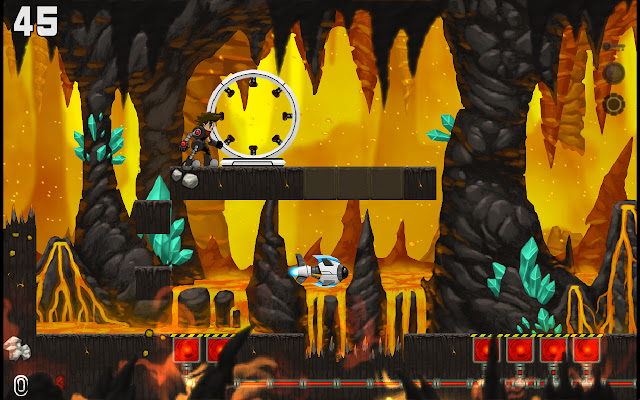 For such a dark story, the bright environments are a juxtaposition with Aero’s blood, guts, and bones as he screams out his last. This was completely unexpected and honestly the shock and awe factor was well placed. The death animation does not get any easier regardless of the number of times that Aero perishes. The sound level of the scream against the background noises and music has just the right balance to startle you and somewhat break your concentration. To remind players of their failures, the red stains from their last attempt can be seen in the place where Aero previously fell.

I had originally thought the more upbeat background musical score was a disconnect against the brutality of the death animations and the story. However going through the stages and watching as blood spatters showed me over and over again where I’d failed, I started to understand why it was done this way. Had everything been dark, dismal, and gory, with nothing to really look forward to, I don’t think I would have kept on going. Balancing out these darker elements with some lighter tones was a necessary concession to keep people playing.

Aero’s Quest on the overall is a good platformer with its mechanics even if the premise fell short. Every element worked in conjunction with each other, balancing out what would have been a dark and dismal adventure. The result wasn’t a pure experience, perhaps, but it is a very playable one.