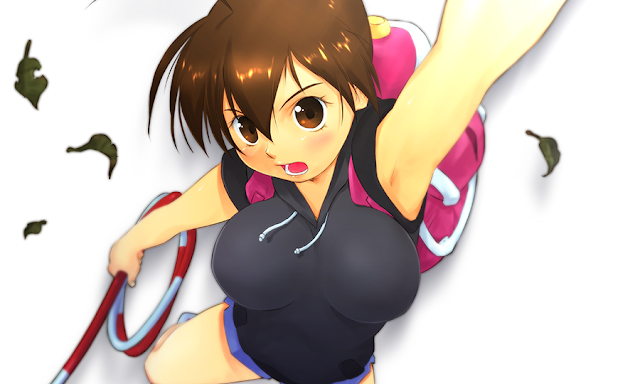 Sayonara Umihara Kawase is no fishing simulator but it might as well be dubbed Reel Fishing 2015. To play is to hop into a boat and drench your lure in the waters of discovery for the first time. It’s a comparison that should have zero business being applied to a platformer of all genres, let alone one wherein the goal is the time-honoured “reach the goal” fare, but the overlap in philosophies between the two is uncanny.
Ask a fisher about the essence of their hobby and you’ll get a myriad of responses. Some boat across the blue waters for relaxing afternoon, some see it as an immersive retreat to nature, and others are just in it for a tasty meal. All these motivations fuel what is no doubt a slower paced sport based on long-term gratification. Granted, most players I’ve encountered don’t elect to consume their cartridges but bear with me.
And like fishing, Sayonara Umihara Kawase demands a tranquil, stress-free demeanour to succeed. Provided the player is willing to patiently study the game’s ins and outs to achieve a certain degree of technical proficiency, the experience can be a deeply rewarding one indeed. Finally completing a particularly gruelling stage offers a certain rush of adrenaline that modern platformers lack and this is thanks to gameplay that emphasises the player’s perseverance and brains over raw trial and error. 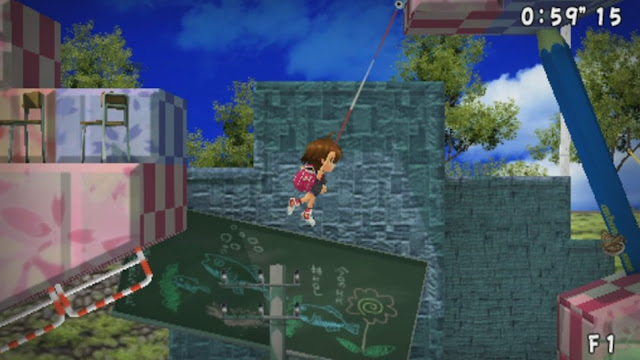 In case it wasn’t clear with all these fishing references, the eponymous protagonist, Umihara Kawase, forgoes standard platforming equipment Mario’s jumping shoes and Mega Man’s buster in favour of a certain aquatic trinket called a fishing pole. And it’s hands-down the most satisfying implementation of a secondary (jumping being primary) function I’ve ever seen in a platformer. If you thought Simon Belmont’s whip in Super Castlevania IV was versatile, you’re in for a treat. Umihara’s rod is everything. It’s a reel, it’s a grapping hook, it’s a bungee cord, it’s a launcher, it’s a swing, it’s a way of life (or, more often, death).

Of course, pulling off all these manoeuvres is intimidating at the starting line. Umihara’s rod comes off as finicky and her movements are noticeably laxer than other platforming heroes. This is howthe game dips its toe into the puzzle platformer subgenre through its implementation of physics puzzles. Although some levels are based around player reflexes, the bulk are about problem solving by finding ingenious ways to manipulate the rod’s physics and locating the best position from which to swing. Umihara’s rod never gains new abilities throughout her quest so it’s never a question of whether there’s some piece of equipment to ease the task; everything can be explored the second you see it.

Even still, prepare to be trounced time and time again as the trials set before Umihara reduce you to a quivering puddle of tears. Each level (of which there are well over fifty, mind you) manages to introduce some new concept or quirk to challenge the player’s beliefs about the rod’s limitations. When reaching the exit isn’t a sufficiently threatening task in itself, certain stages offer optional collectibles to work the old noodle. Granted, Umihara Kawase is hardly a 2D Dark Souls in terms of overall difficulty, but to bring up fishing again, it demands a level of patience that other puzzle platformers forgo. A thirty second to one minute long level may well devour half an hour as you struggle to parse its puzzles. The relatively small estate of each stage is often deceptive and the natural response to the layouts of many levels is to rush headlong into deadly scenarios. The reward for that, of course, is a sky-high death count that the game deviously delights in presenting every time you so much as highlight a level on the world map. I suspect this learning curve people is why some will fail to appreciate all of Umihara Kawase’s charms. One needs to properly grasp Umihara’s rod and the intricacies that are introduced on a level by level basis or this game becomes a soul-destroying pastime indeed.

Besides the rod-swinging shenanigans, the sheer number of alternate pathways and endings help keep Umihara Kawase fresher than a newborn guppy. Although the surface area of each one tends to be meagre, figuring out how to access every nook and cranny requires so many repeated attempts that each one is a playground in its own right. The game uses its collectables sparingly and meaningfully by orchestrating clever puzzles around them and only placing a reasonable number on stages best suited to additional exploration.
Sayonara Umihara Kawase also has quite the presentation. Thematically, the fishing aesthetics are as overwhelming as my incessant prattling on about them would imply. The game takes place in a bizarre dream world where an abundance of water and anthropomorphic fish are the norm. Most of the action takes place on floating blocks that are accentuated by various old-fashioned architecture and oceanic backdrops. What truly gives the game its soul, however, of the stellar soundtrack, which is composed of many nostalgic-sounding chipper melodies and instrumentation and designed to elicit a longing for Japanese nature. In an abstract sense, these emotion-driven tunes help dictate the player’s pacing; trying to perform speedruns and the like seems out of tune with the atmosphere the game projects. 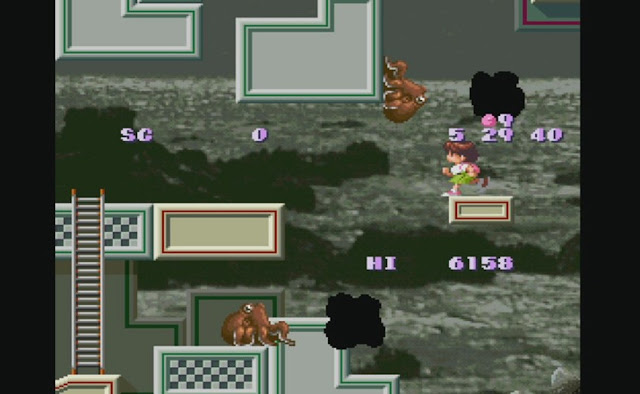 Oddly enough, advanced modes for speedrunners do exist and, as such, I recommend turning down the volume before attempting them. Nevertheless, once you’ve mastered Umihara Kawase’s puzzling controls, secondary modes that reward precision like survival and time attack are ethereal in their appeal. The inclusion of a replay function allows players to capture not just their best times but the ridiculous flukes and triumphant comebacks that inevitably occur with such elaborate stage designs.

Also on offer is a port of the original Umihara Kawase for Super Famicom and boy is that one an absolute treat. The series’ grandfather is closer to a straight-up arcade game than the sprawling free-roam in the main game but it established the trademark mechanics superbly. In fact, the 20 year old retro game actually introduces its gameplay less clumsily with snappy cinematics ala Mario VS Donkey Kong. There’s a boatload to say about this one from its frenetic pace to its emphasis on outwitting enemies. I could hijack the review and ramble about its intricacies from here on out but that’d be a real bait and switch.
Incidentally, the inclusion of the classic Umihara Kawase is legitimate incentive for owners of Sayonara Umihara Kawase on 3DS to double dip. While this “plus” edition boasts the requisite bonus levels and various tweaks that are to be expected from any enhanced port worth its salt, this is the first time the classic game has been released outside of Japan and it could carry a purchase on its lonesome. 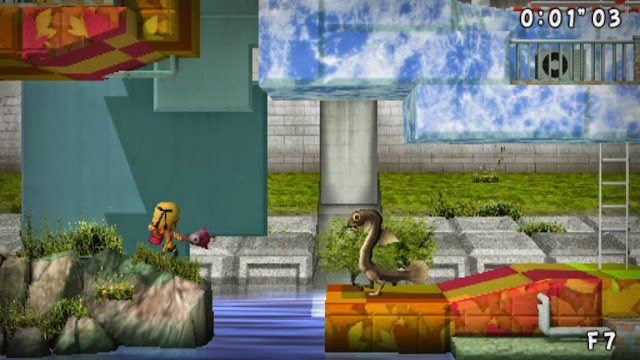 Sayonara Umihara Kawase catapults itself above various other experimental platformers by tapping into every last ounce of potential its “gimmick” has to offer, eventually transcending all derogatory connotations of that term. Of equal importance are the raw atmosphere exuded by each stage and the unparalleled sense of contentment inherent in besting them. It’s the complete package.

Sayonara Umihara Kawase+’s mental gymnastics are every bit as sadistically soul crushing as they are cunningly compelling and this two-spirited nature poses a serious entry barrier. Like fishing, however, this platformer is a bona fide experience. Umihara demands to be ingested slowly and savoured, preferably accompanied by fine wine.

The Friday Ten: Ten of the finest Nintendo DS JRPGs