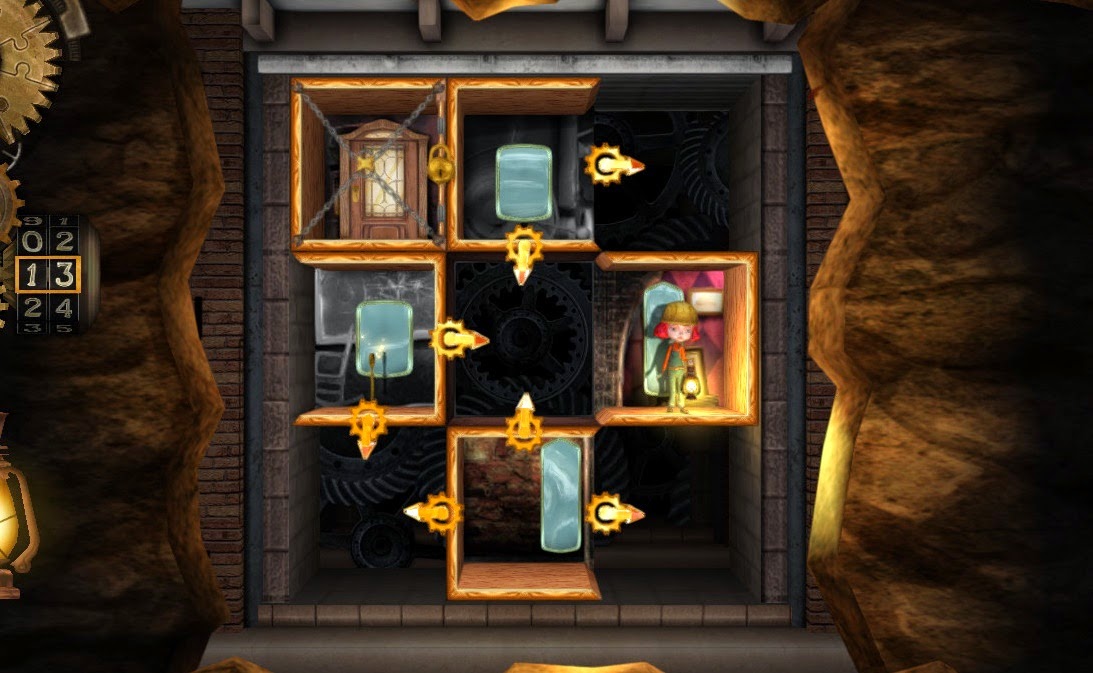 Almost everyone remembers playing with sliding puzzles when they were young. Those small, square puzzles with pieces that slid to reveal a picture were anywhere from so easy a toddler could do it to so mind-bendingly frustrating nobody could figure out what needed to go where in order to solve it. Rooms: The Unsolvable Puzzle – a sequel to the hit Rooms: The Main Building – evokes all those feelings of childhood while adding a layer of complexity only an adult could surpass.

The game begins with Anne, a young girl, reading a bedtime story about a mysterious toymaker whose dark secrets led to his mansion disappearing entirely. When she is done, Anne goes to bed. Strange noises occur later that night, and Anne wakes to find the toymaker’s mansion right outside her own front door. As any curious child would do, she enters the puzzling mansion (and later three others) but becomes trapped and must find which door leads to an escape route with the help of a handy talking lantern.

The premise of the story seems fairly innocent at first, with Anne’s situation being eerily similar to that of Belle in Beauty and the Beast: a girl enters a quiet and seemingly empty home and is soon helped by what would normally be an inanimate object. As the history of the toymaker is revealed in small pieces, the story becomes more dark and twisted. 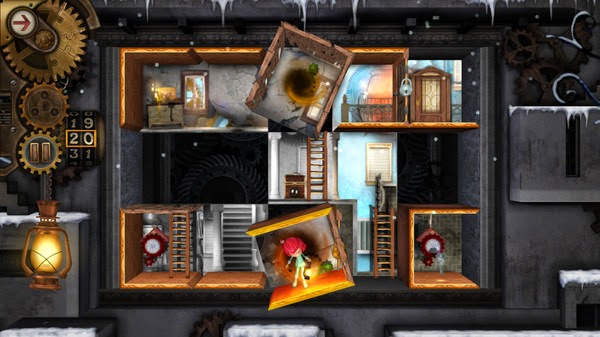 The story quickly takes a back seat to the gameplay, as is often seen in puzzle games. This is in no way a negative, as the gameplay is completely engrossing. It begins as a simple sliding puzzle game where Anne needs to push square rooms into the proper places for her to exit through the door. In fact, the levels are so simple at first it takes mere seconds to get through them.

As the levels progress, the difficulty goes up exponentially. Keys and ladders are introduced early on, with different items continuously being added as Anne conquers each locked door. Each time a new item becomes available, your trusty lantern friend will explain how to use it. There is a limited number of times per level a room can be moved, but Anne can otherwise move about infinitely. Paying attention to room backgrounds becomes important, as it is easy to forget the sliding puzzle aspect and putting the rooms in the correct places often leads to the solution after a few other steps.

Each level is scored on three golden puzzle pieces based on the number of moves it takes to get Anne to the door. The limited movement is both a help and a hindrance. All three gold pieces are earned only when the player moves rooms the absolute minimum number of times to solve the puzzle, which aids in assessing difficulty but is sometimes difficult to achieve without the option to undo. If you move rooms enough past the target number, Anne suggests you reset – which is usually a good idea, because you’ll be so twisted up you’d never recover. 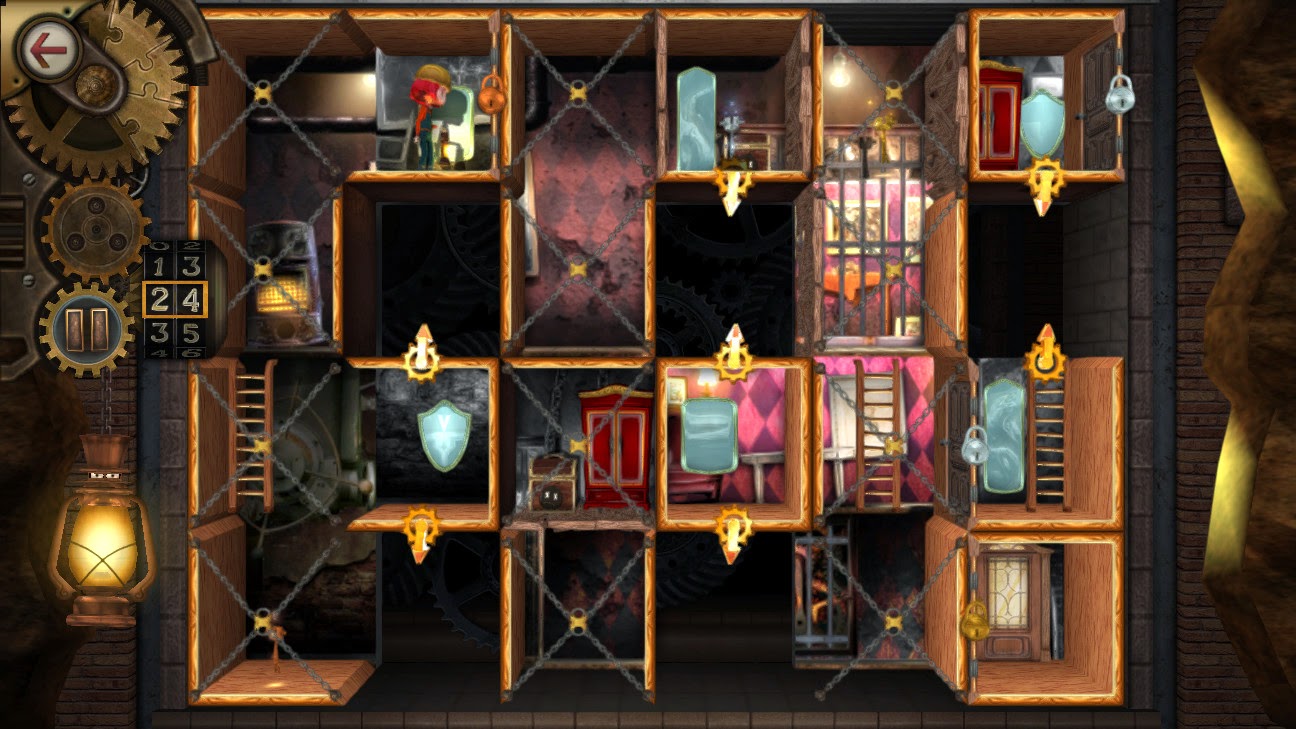 The difficulty curve can leave you feeling both elated and frustrated. As previously mentioned, early levels may take only a few seconds to complete. After 10 levels, most need multiple tries to even get to the door (let alone receive the coveted three golden puzzle pieces). After 25-30 levels, the difficulty gets to the point your entire body goes tense and your brain screams to give up; however, the feeling of elation when completing those levels is unparalleled.

The controls function well enough using a keyboard and mouse/trackpad on both PC and Mac. The arrow keys serve to move the rooms (up, down, left, or right depending on open space) while the cursor and mouse click move Anne or allow her to use objects. The game claims to have full controller support, but when I tried to use one I could not find a way up the ladder for the life of me and instantly swapped back to the keyboard/mouse controls.

While the controls may have some kinks, the graphics are perfect for this type of game: crisp and colourful yet moody and dark. However, don’t expect anything that hasn’t been seen before – it resembles the graphics from a lot of other puzzles, and actually reminds me a bit of the Professor Layton series as far as aesthetics go. The sound compliments the graphics and story by providing music that is a cross between a Disney movie and a child’s music box. Very little is unexpected: rooms make sliding noises, doors creak when opened, and keys clicking when used to unlock a padlock. Unfortunately, the constant tinkling of the music on repeat and shuffling of rooms is not what anybody wants to hear when they seem to be eternally stuck on a level, and at those times the music and sound effects are best left muted. 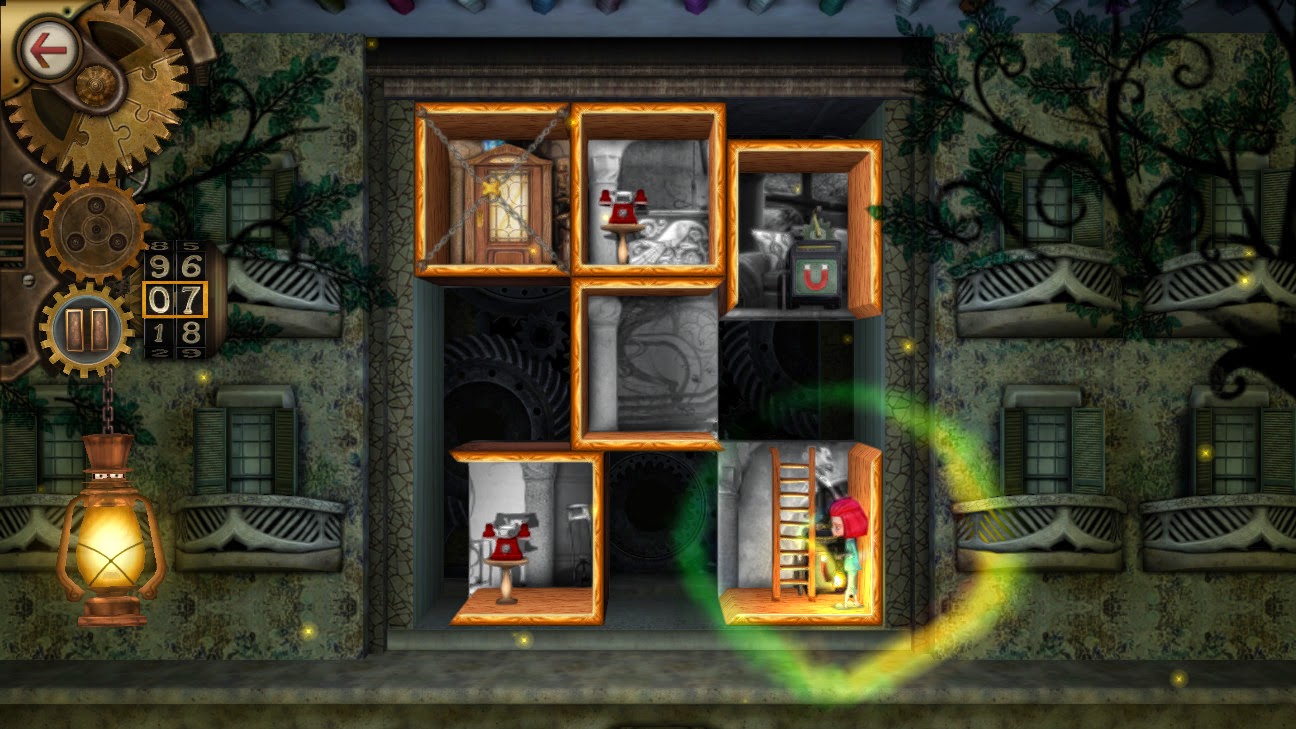 Rooms: The Unsolvable Puzzle may seem impossible to complete at times, but it is a great game to return to once your mind is cleared from the sheer full-body frustration experienced when trying to complete the more difficult levels. While the graphics are nothing special and the controls may give you a hard time despite the game being controller-compatible, the story and gameplay are well worth an entire playthrough at least once.

Why I have deep concerns about Yooka-Laylee