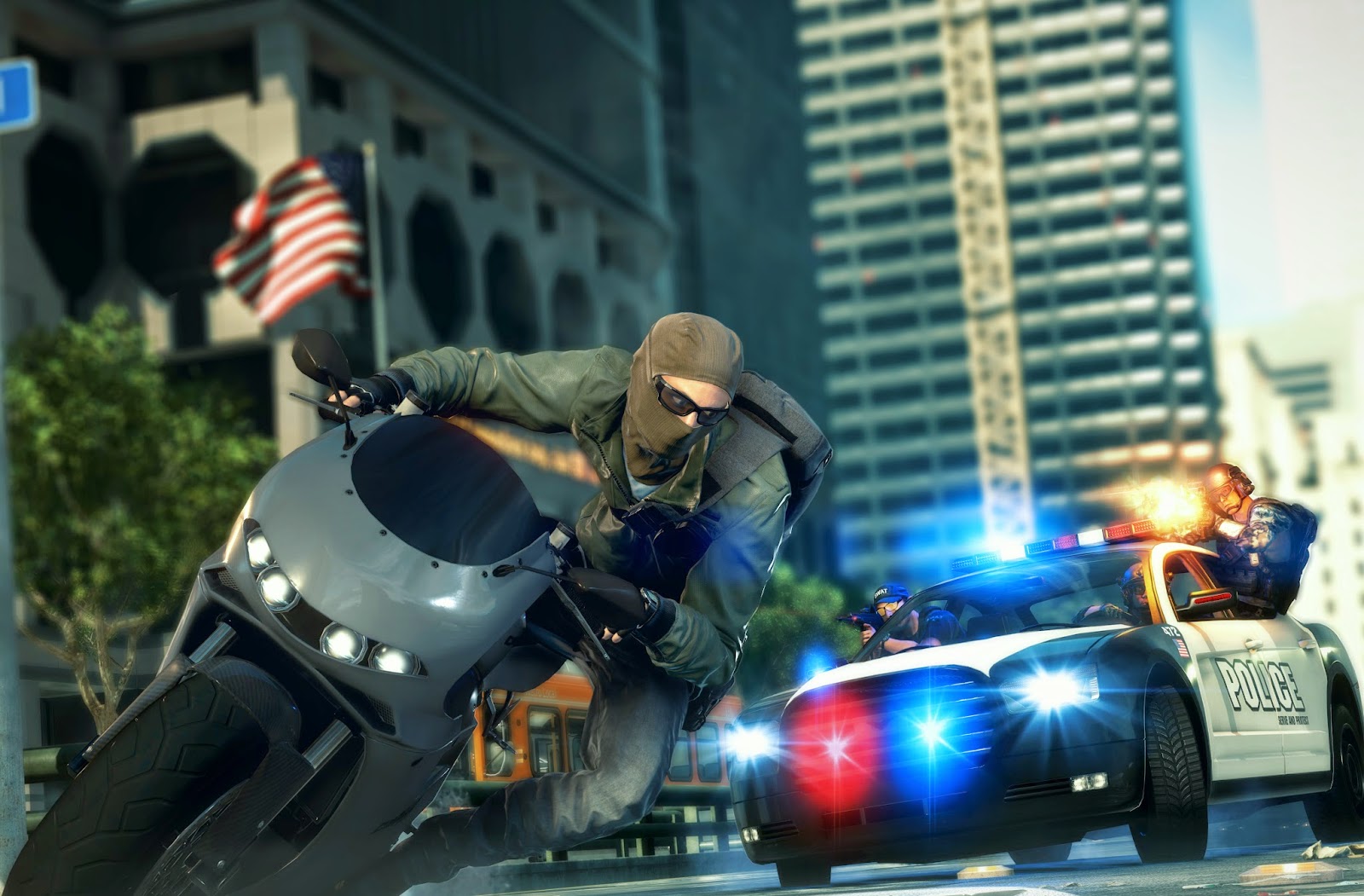 After all, Ferguson is a pretty big deal – you’ve got protests and even riots happening in America right now over police brutality, and on the other side you’ve got police that feel they need to arm themselves with military weapons because, thanks to America’s… fascinating… gun laws the citizenry are themselves armed to the teeth. The whole mess is as loaded as political debates come, and it amazed me that EA and Visceral were continuing on the path of a shooter about America’s police force.

I remember clearly the response I got from the Visceral developers; that Hardline was a fantasy and wasn’t designed as a political statement. I remember it because they repeated this over and over again as though they were trying to drum it into my head that Battlefield should not be compared to Ferguson and that these police and criminals are just a fantasy – a modern day take on the cops & robbers games we would play as children. 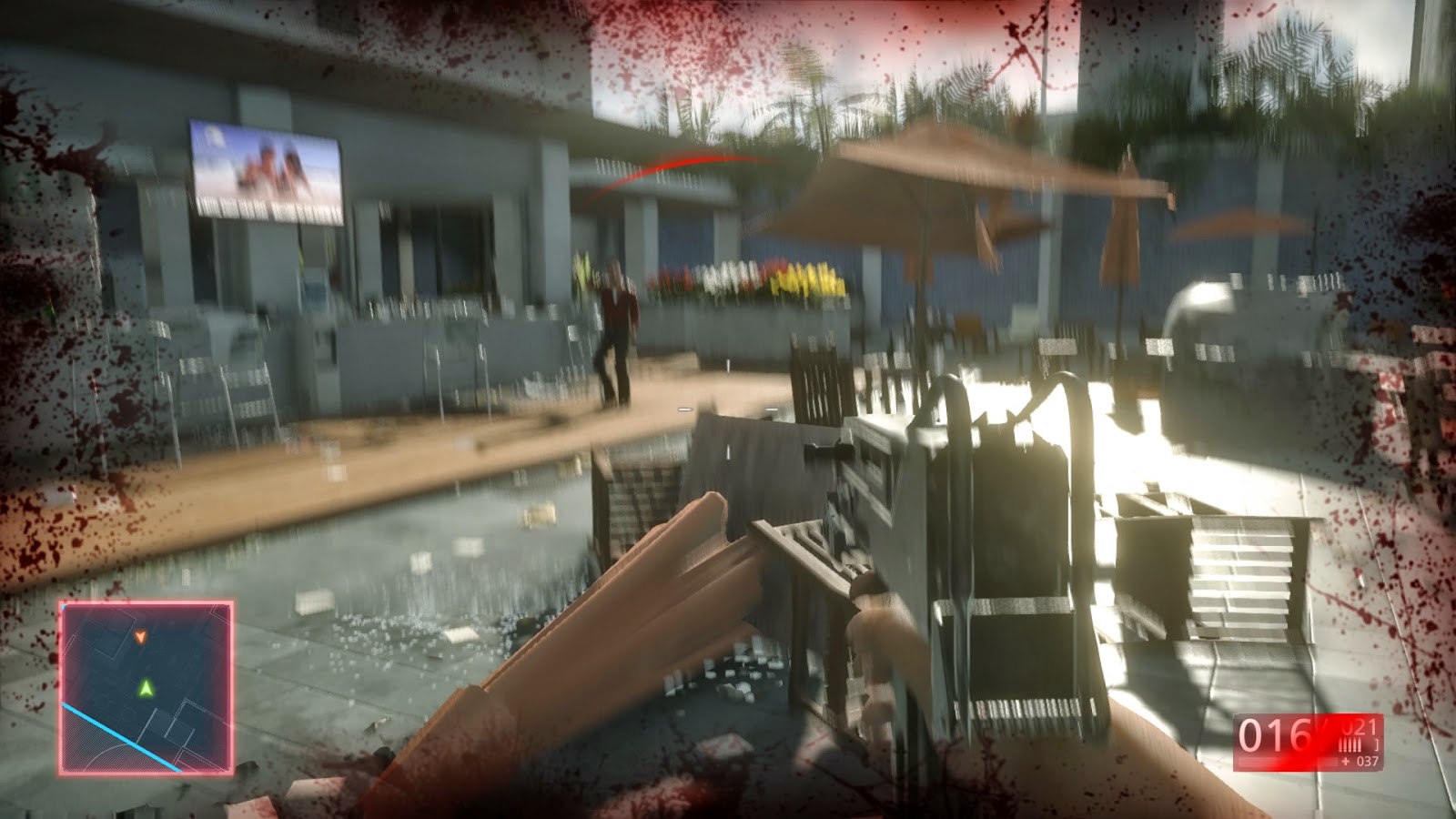 In the first hour of Battlefield: Hardline I found myself playing the role of a cop, as I battered down a door and shot up a room of suspects. Then I chased another in a high speed car chase that ended with him crashing his car, and me then hurling insults at him as I roughly handcuffed his bleeding and dazed form. I was never really told why I was doing this, other than these were drug suspects (and therefore baddies) and that justified filling them with lead.

Then I had a new cop partner for some reason and we went to lean on some snitches to convince them to give us information and even infiltrate the headquarters of a local kingpin. Then we discovered that this fellow was being hunted by other criminals and they bust into the building. My partner takes a bullet, and the new criminals yell at me that they have no beef with the police. Because this is a FPSer though and I have no control over how the story unfolds, my only option there was to shoot them anyway. I was able to save my partner, she returns to active duty, and in the next stage she’s battering a suspect bloody.

Look. If we’re going to accept that games have artistic merit, than at some point we’re going to have to accept that the stories we tell though games have cultural relevance. That is the very core of what art is – it’s culturally relevant media. And so you don’t get to make a game about police behaving in a borderline unethical and certainly brutal manner and then turn around and say the real-world discussions people across the world are having about police ethics and behaviour is irrelevant. Because it is relevant. The very act of calling Battlefield: Hardline apolitical is itself a political statement, because you’re effectively denying that this topic is meaningful enough to have a discussion about it through our art. 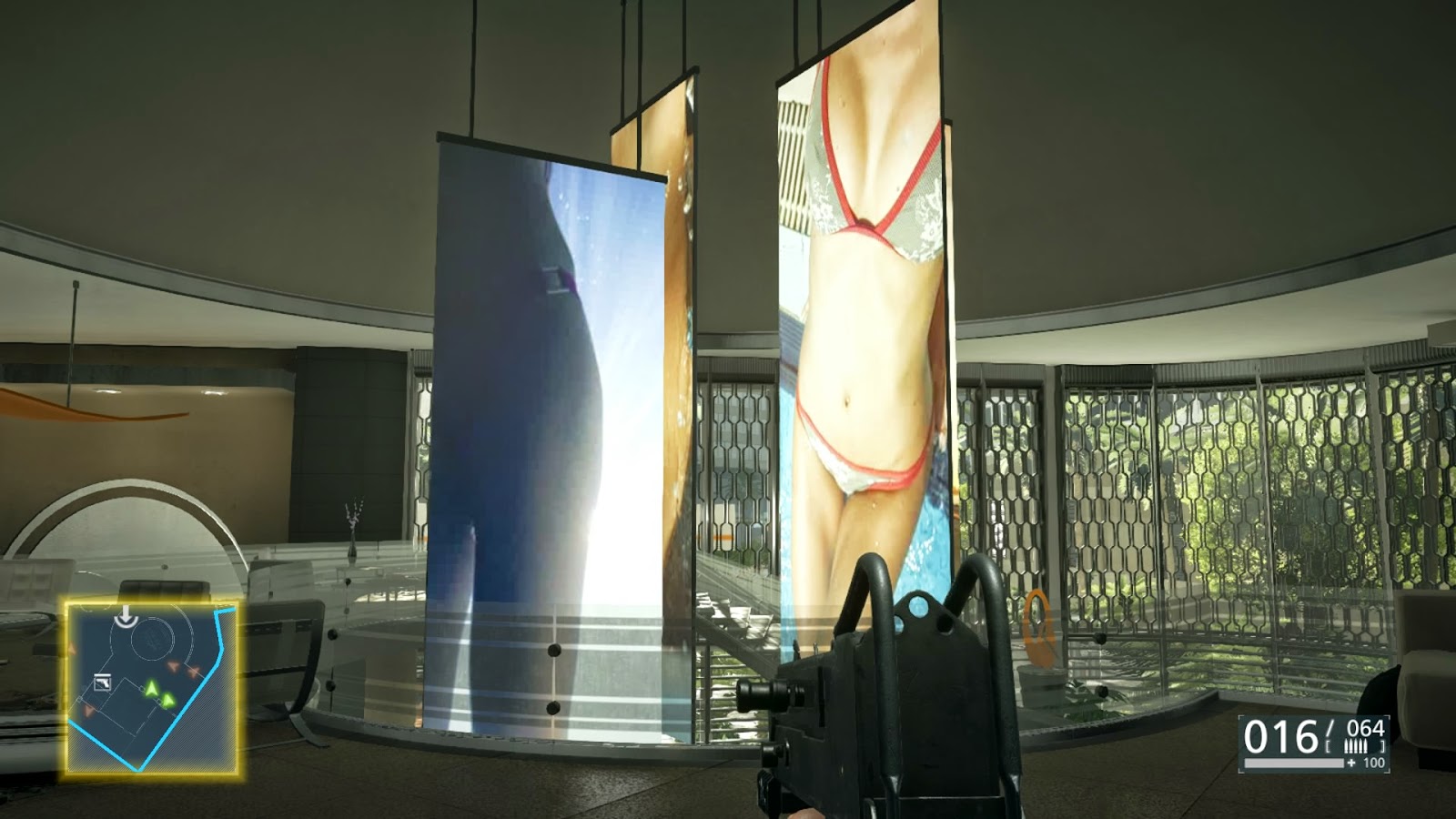 This would all be forgivable if the game did something with the narrative. If it were to challenge the players to consider the morality of what’s going on around them, then Hardline could have been a classic. Instead we’re exposed to a faux Hollywood crime drama presentation with big action and snappy, sharp camerawork and dialogue, but minimal depth and certainly nothing that pushes people into places where they might feel a little challenged. Battlefield Hardline doesn’t have an especially meaty single player narrative, but it feels even shorter than it is, thanks to the extreme kinetic energy that it approaches in its storytelling.

It’s especially disappointing coming from EA, which of all the big publishers is the one that has the most respect for its audience as intelligent human beings. That the same publisher behind the likes of Mirror’s Edge and Dragon Age can then turn around and produce a narrative with the artistic weakness of Battlefield is something that I found to be truly disappointing. The shooter genre can craft meaningful narratives. We’ve seen this with Spec Ops, and even EA’s own Mass Effect hybrid shooter/ RPG. There’s simply no excuse for narratives that lack this kind of cultural awareness… or even concern for the broader context with which the game is being released.

But how does it play? 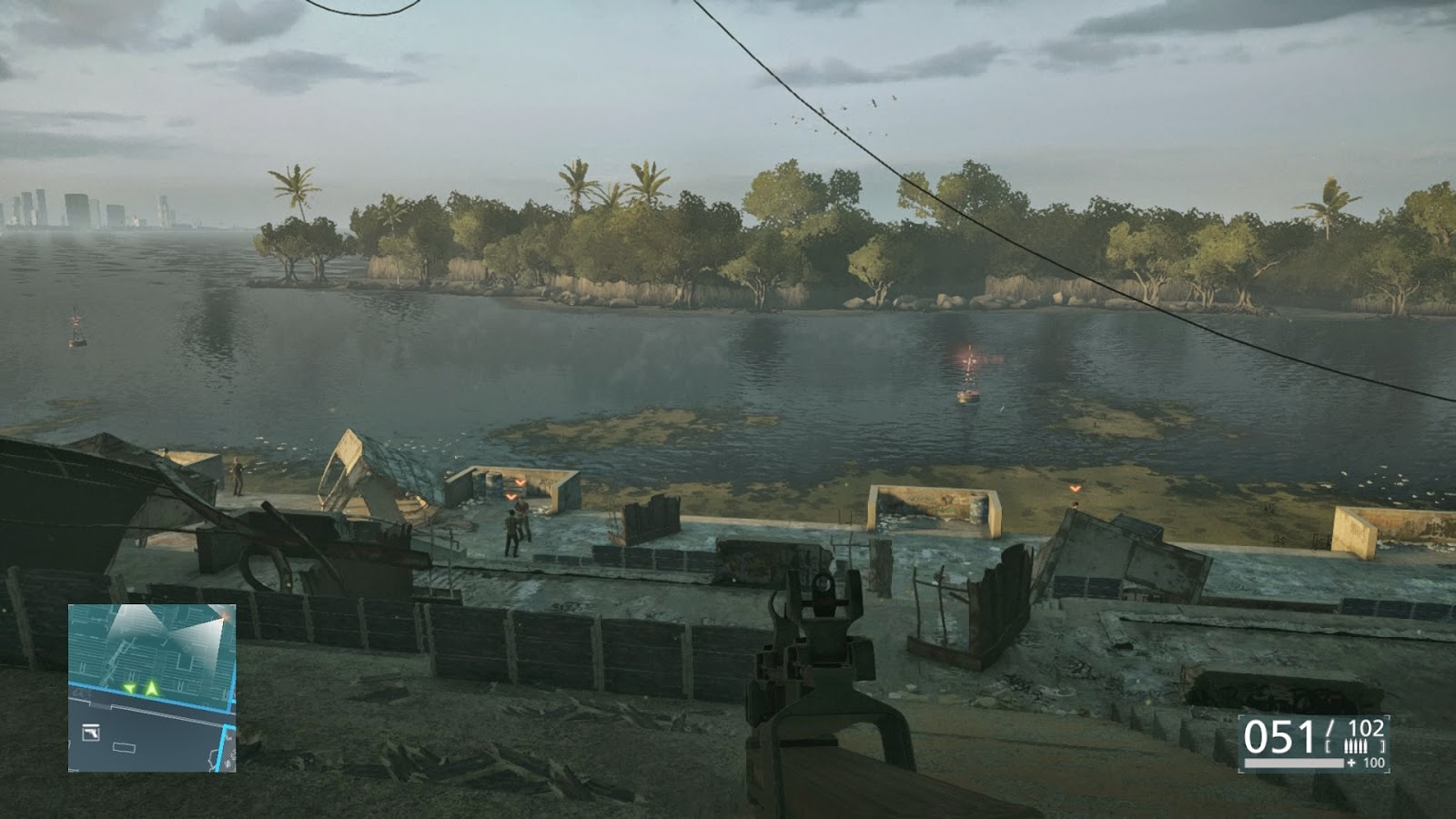 Take the car chase that I mentioned at the beginning. It’s a short sequence, but it’s emblematic of so many of the problems with the modern blockbuster shooter. It’s over scripted to the point where if you head down the wrong road it’s an instant mission over. It’s cheaply produced – I deliberately ran into a truck at full speed to see what happened, and my vehicle simply stopped driving. There was no car damage and no physics in there – it was a simple matter of stopping at an obstacle (and then a mission over message because I wasn’t driving right). Visceral tries to hide this crushingly restrictive structure behind explosions and energy, but boiling things down results in a structure that is just not that engaging.

Another example is about midway through the story, where you’re charting a boat through the swamps of Florida. If the boat connects with a tree, the tree explodes in a mass of kindling, despite the boat being a tiny tin can. There are scripted moments to use a grappling hook or zip line, and then there’s the moment where a crocodile attacked my hero. I fought it in a quick time event. Nothing about the experience is authentic, believable, or interesting. Despite being as open as any modern FPSer, that swamp sequence was still singularly focused at funneling me into a firefight with a bunch of goons, with little interest in the details that gets me there.

The guns feel good in the hands, and there is a nice range of them to suit most play styles. Levels are constructed with an expert’s eye to keep the energy high. Just like a Michael Bay film, the components are put together with technical competence, but it’s like a dessert that’s pure sugar – it might look good, but it’s a shallow flavour underneath. 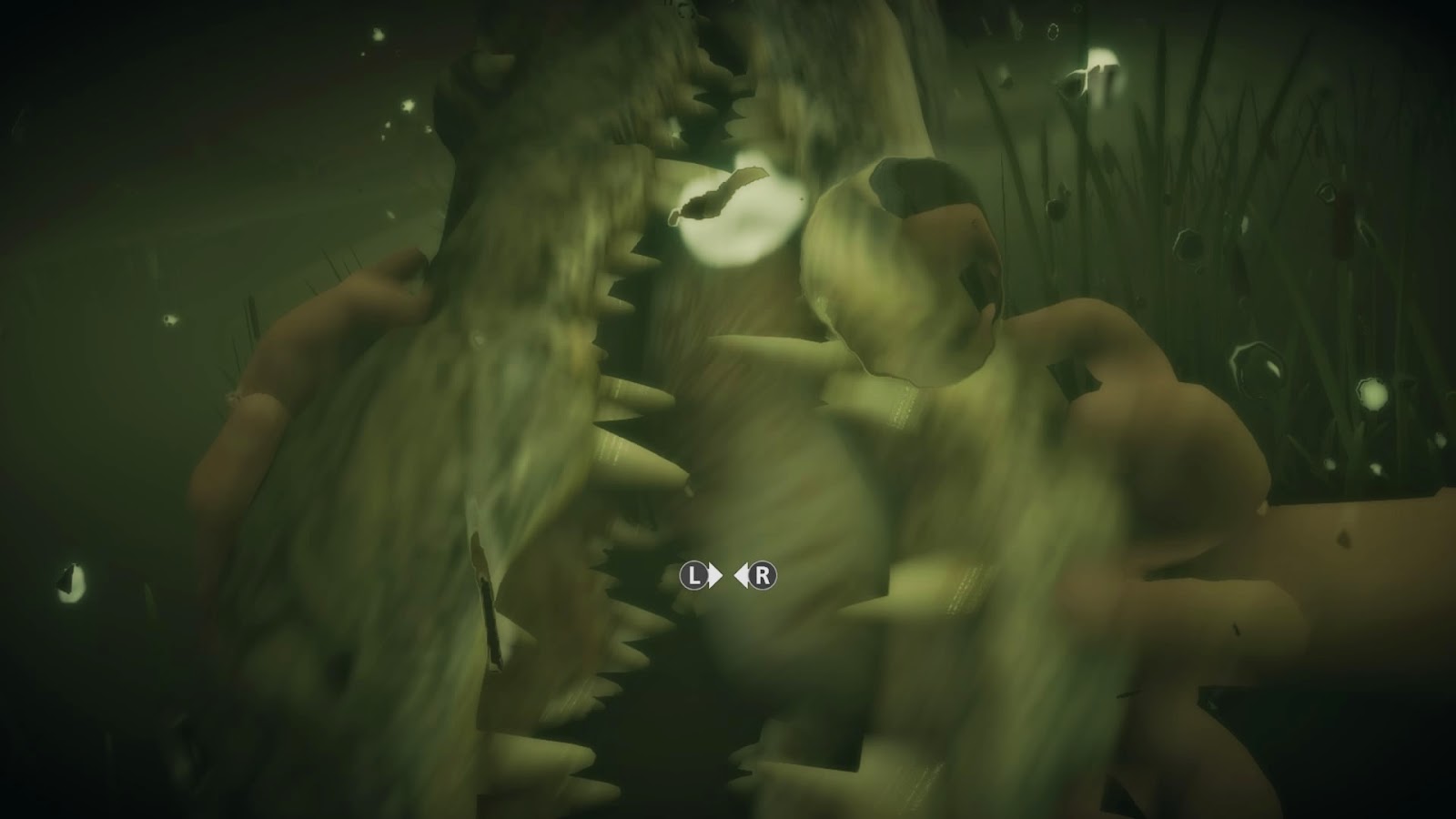 Of course, fans will argue that the real experience is in the multiplayer, and that’s true enough. Battlefield: Hardline offers a huge range of multiplayer modes, all focused around the “cops vs. robbers” concept, and there’s a lot of variety within those. My personal favourite was the hostage mode, where the criminals would need to protect a couple of hostages they’d taken, while the police would need to try and rescue them. In any given level you’d only have one ‘life’ – die and you’d need to wait until the next round, and the winning team was the first to five. Because there was real consequence to being taken out there was a level of tension about the action that is appealing, and it encourages teamwork in just the right way.

Other modes require the robbers to break in to a stronghold and grab bags of loot, police need to escort an important person from one end of the map to the other, and more traditional capture the flag and team deathmatch modes. Maps are generally well designed, with plenty of walls, objects, twists and turns to set up ambushes from, and other maps offer plenty of open areas for the vehicles to hoon around in. Given that helicopters, cars and other such military vehicles has been the most distinctive part of the Battlefield multiplayer experience for some time, the maps that feature these are a highlight, and it’s a feast for the eyes to watch it all play out before you. I’ll happily admit that I had more than a few deaths as a result of allowing myself a moment to take in the scenery, only to have an enemy sneak up on me.

The more time I spent in the multiplayer the more I was reminded of my days as a child playing games like cops and robbers. The rulesets that each mode has behaves very much like rules that I’d make up on the fly, as kids play tends to do. It’s a little awkward that the violence is quite extreme, but variety in rulesets and the playfulness of it put a smile on my face nonetheless. I wouldn’t say the multiplayer saved the single player game, but it saved Battlefield: Hardline from being a disaster. 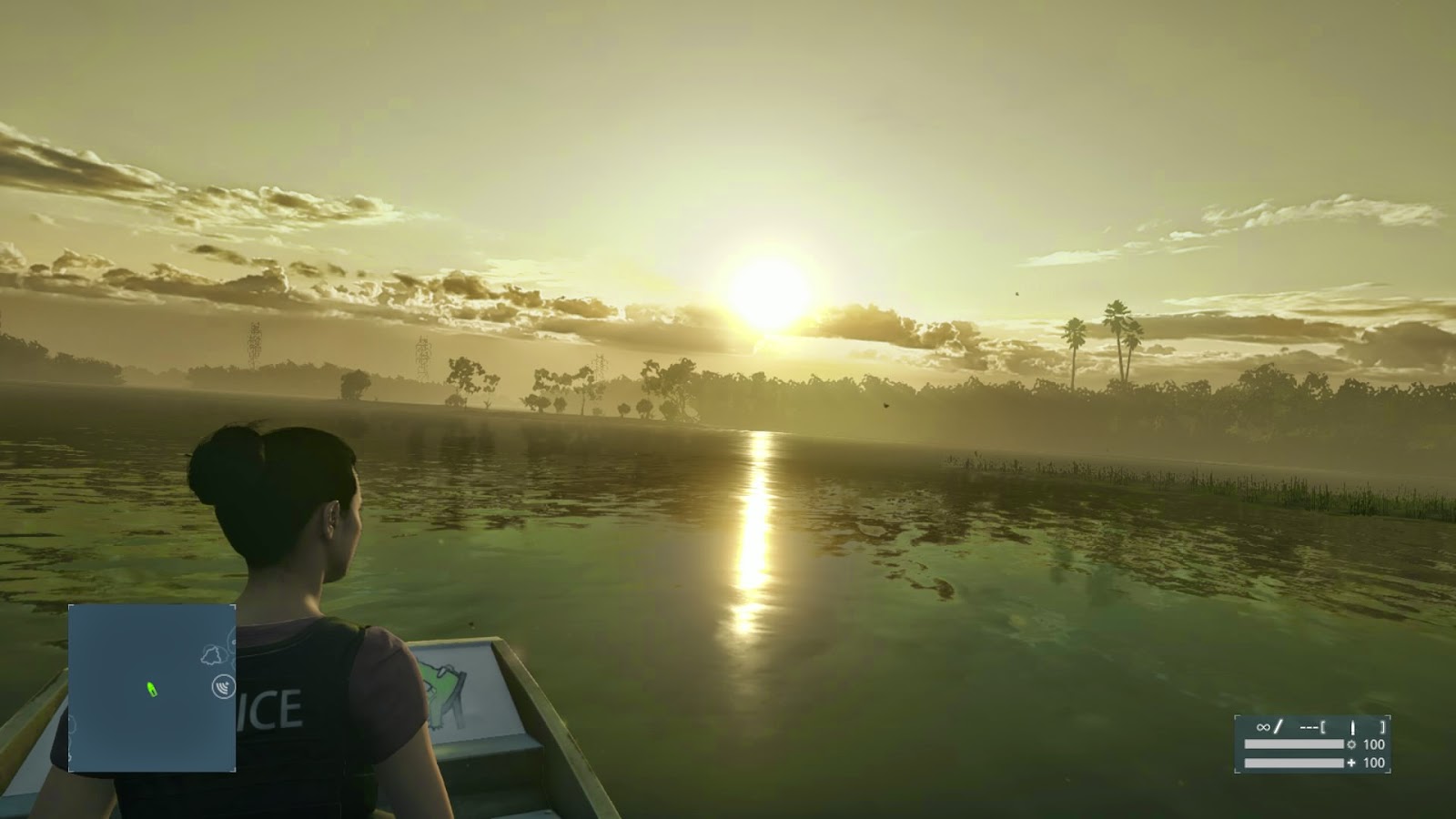 It’s been a few years now since I played a Battlefield game, so I have no idea how much of what I experienced in the multiplayer was a holdover from previous games, but coming in fresh there’s certainly enough content in there to commit many weeks or months of play time. Having heard of the woes that previous Battlefield games experienced with the online infrastructure, I was pleasantly surprised to find the netcode to be robust and reasonable – I can’t think of any moments where I encountered major problems. I was, however, surprised to find that some of the modes already seem to be underpopulated.

Multiplayer is, of course, the main reason that you buy into a Battlefield game, and it’s generally enjoyable, even if it doesn’t do anything to revolutionise the genre. However, both Activision and EA, and every other FPS developer that aspires to become the top dog franchise, needs to learn that if they are going to persist in putting single player narratives into their games, then they need to do a far better job. Telling a good story is not about throwing in more explosions. It’s about understanding the context that the story is being created within, and then doing something with that context. That’s art. That’s what separates Battlefield: Hardline from a genuinely intelligent game like Spec Ops: The Line.

A couple of important updates regarding Atelier Shallie and Dead or Alive 5: Last Round

Win a copy of Soldner-X 2: Final Prototype for PlayStation Vita!