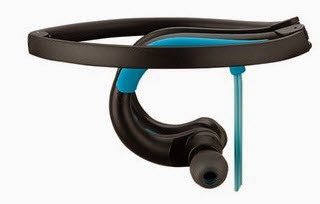 Gaming-on-the-go. It goes hand-in-hand with audio-on-the-go as well. The iHome iB14 FIT Earbuds are not necessarily meant for gaming, but they can certainly be used in that capacity. They are more interested in hanging on during active travel or exercise, being very portable and sounding good. By and large, the iB14s succeed on those fronts.

Typical wire earbuds lack support. The end result is too much head or body movement can cause the wires to catch on something and pull out. One of the biggest issues with a set of actual headphones is their design makes them durable and helps them to stay in place effectively, but they are not always the most portable of devices.

Exercise earbuds attempt to bridge that gap and the iB14s does so as well. The first item of note is that the earbuds have a behind-the-head design that lets them hang back near your neck. Instead of having the band tugging at and across the top of your head while running or walking briskly, that does help enable the earbuds to stay in place. This is aided by the frame that tucks up and over the top of your ears. An additional advantage to these earbuds is that they have three different ear sized ear cushions to accommodate a wider variety of ear sizes. I opted for the default middle sized ones, but they are easy enough to swap in and out and stay on securely.

Portability is emphasised a few different ways. Some of that shows up in the packaging, which provides a travel pouch and touts the box hanger as a plastic clip that can be used as a cord wrap for excess cable management. It works easily enough, though honestly I just wrapped it around my iPhone for a similar effect. That and I wrapped it loosely – I have had entirely too many headphones go bad because of a bent wire that broke within the insulation. There is a design feature on the earbuds themselves that helps with portability, and that is the ability to fold the earbuds down into a more compact size.

As for the sound quality, these earbuds feel somewhat middle of the pack. I was a bit surprised as how good the lows sounded, but the higher tones did not always fare as well. They certainly sound better than the built-in speakers on an iPhone or a 3DS and the afford privacy as well when sitting on a plane or bus. The audio range holds up fairly well, but the cushions provide little to no noise isolation. These work better on a jog with an MP3 player than a noisy subway where the chatter around you can trickle in relatively unabated.

One other handy feature was the in-line volume control on the wire, which allowed for quick audio adjustment without the need to take out your device and fiddle with any controls. The line could have been more sturdy though. Because it is not in any way detachable, should it break there is no easy way to replace it, though iHome does promise a lifetime warranty for this model – likely in anticipation of an active lifestyle while they are in use.

While these make for serviceable game earbuds for portable game systems, they are definitely meant more for music when working out. I used them while jogging and shooting hoops on several occasions and they worked quite well for that, but otherwise the sound quality is good without being great.

These earbuds can be found here