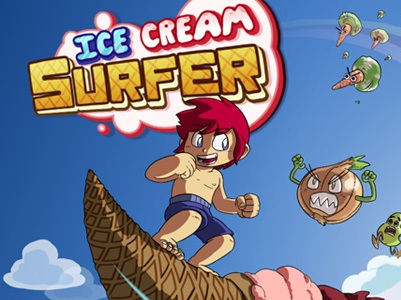 Review by Clark A.
As much as concerned parents and health experts rightfully malign the sugary cornucopia that is the frozen treat section of the grocery store, I fondly recall the pleasantries of gulping down low-quality ice cream as young ‘un. Cheap as said snacks may be, they’re an adequate substitute for the premium that can still raise a child’s spirits. Hoard away a few value packs in the freezer and the brain freezing, teeth-rotting bliss can linger for months.
It’s saddening that Dolores Entertainment’s 2D shooter, Ice Cream Surfer, is instead reminiscent of digging into that tub of freezer burnt Chapman’s vanilla after its snooze in the bottom drawer defied ma and pa’s memory banks. It’s alluring in its simplicity. It lookstasty to the undiscerning gaze of youth. It’s got a retro charm and, most crucially, it’s still ice cream. Ultimately though, there’s little worth in wolfing down a fatty treat bereft of its flavour.
Now, what one might describe as the “flavour” of a shoot ‘em up varies greatly. Like ice cream, shoot ‘em ups are nutrition for the soul rather than the body or mind. Scarcely will players be challenged on an intellectual level, but the genre’s demand for both patience and nimble thinking has forged many unforgettable gaming experiences. As such, it’s a genre full of as many wants as a trip down to Baskin Robbins; some seek fresh mechanics, some yearn for a rewarding challenge, and others still place replay value on a pedestal.
Ice Cream Surfer doesn’t particularly excel at any of those categories, which is a pity because the art direction creates a favourable first impression. It’s a likable mishmash of eastern and western comic book sensibilities with a silly plot and characters that directly parody said stylistic influences. The in-game action isn’t quite as aesthetically stirring with its decidedly miniature sprites, but it still does the trick. 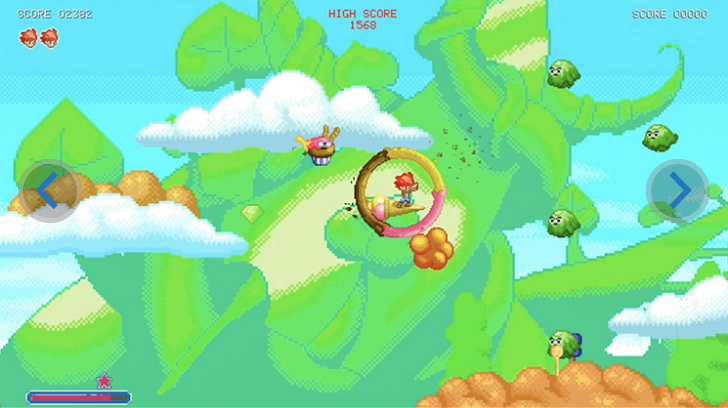 Until the player begins to actually control one of the six playable characters, that is. Right from the outset, the lack of a rapid-fire function is discernible. That type of absence is lamentable in 2014 unless there’s a creative design choice facilitating a special new mechanic. Otherwise, the initial enthusiasm for hammering away at one button melts away faster than a Dilly Bar on a toasty summer evening.
Numerous other issues such as spotty collision detection, occasional slowdown, and poor graphical conveyance permeate throughout, but Ice Cream Surfer’s chief failing lies in its desire to rest on the genre’s laurels. That’s not detestable conceptually; the Wii U Virtual Console lacks many shoot ‘em up greats as of this writing, so a by-the-numbers modern title with classic trimmings could easily satisfy a niche craving.
It can ill afford to ape the genre’s ancestors, however, when each level is straightforward horizontal shooter fare with shoddy execution. There’s no attempt to sprinkle in the occasional obstacle beyond a barrage of disenfranchised veggies and rogue sweets. The game didn’t need to be R-Type, but some deeper form of engagement with the environment around the player would have been preferable. I truly appreciate that there are multiple characters – six at that – but their neat variations can’t inject life into a bland experience. The most remarkable aspect of the gameplay beyond firing away is collecting scattered letters that spell the word “ice cream” for a reward. As is, you’re paying for a handful of levels that more or less feel and play the same with backdrop and boss alterations. 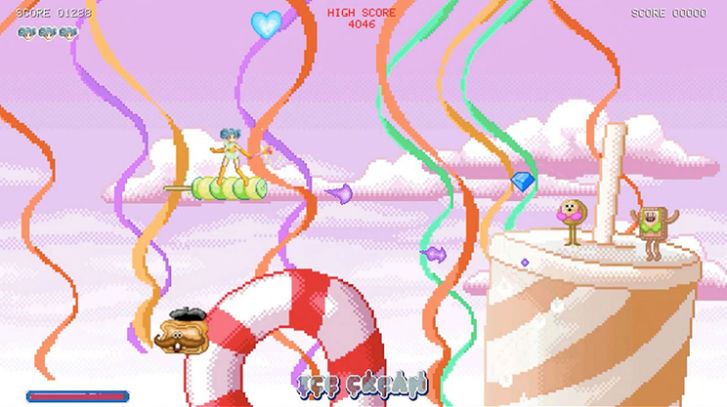 The stages also have minimal challenge, sans the mechanical issues that occasionally impede on the experience. This means you’re going to see most of what the game has to offer with considerable haste. Some stage bosses are actually good fun, but they won’t exactly cream you as more than one of the six has easily exploitable tricks the player can use to win without the risk of ever being hit.
This is all compounded by load times that are curiously slack for a low-demand, 2D pixel-based game on more than capable hardware. If the game offered some kind of feedback such as a loading bar this wouldn’t even be problematic, but as is, it’s unsettling enough that I remained paranoid that the game was about to freeze. The main menu, too, features some strange decisions such as not allowing the player to advance with the A button but with X. I’m generally not one to cherry pick these minute details, but they’re sadly indicative of the game’s overall polish.
Ice Cream Surfer deserves full credit for offering a taste the Wii U could use more of. I just wish the developers focused less on decking their digital sundae with chocolate sauce and realised that the ice cream beneath it was past its prime.