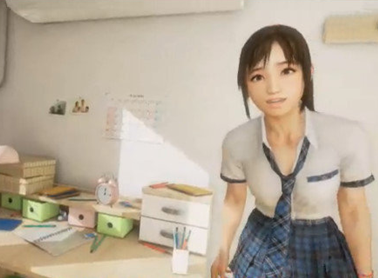 This was inevitable – some developer in Japan was going to take the Oculus Rift or Sony’s Project Morpheus technology for virtual reality, or VR, and use it to create one of those “quirky” games where for reasons unknown you, the player, find yourself in a schoolgirl’s bedroom.

And that’s what’s happened, but it’s a little surprising to see the pedigree behind it. The one and only Tekken Team is working on it.

Called Summer Lesson, there’s almost nothing that we know about it yet. Sony showed the game off as part of its pre-TGS live stream, and it’s a game where you wear the VR headset and interact with a girl in a room.

There’s no doubt going to be much more to the game than this. And, as creepy as the idea might sound, when a talented team is behind these kinds of games, they do often work. I stand behind the quality of the Love Plus games, for instance.

I don’t expect this game will be available outside of Japan at any stage, but hey, it’ll be hands on at TGS and I’ll be at TGS so I’ll be sure to tell you all what it’s like to go hands on with this.. ahem.. girl.

Persona 5, Dead or Alive 5 coming to PlayStation 4 (Oh, and Dragon Quest Warriors too)