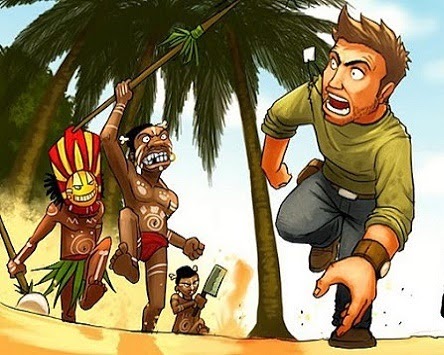 I’m not a big fan of mobile gaming as I often fail to be able to touch touch screens with the preciseness that many of the games on mobile platforms demand. To that end, I find I enjoy them much more when ported to a handheld or console, with a good example of that being Sparkle 2. Run Like Hell!, however, seems more fitting as an instruction rather than a game title, even after it has made its way off the mobile platforms and on to the PlayStation Vita.

Run Like Hell! is the first title in the series to land on the PlayStation Vita (there are three more titles available on Google Play that play exactly the same as the first one), and it comes with Vita controls that do indeed allow more precision when it comes to jumping and sliding than offered on its mobile ancestor. Unfortunately, jumping and sliding is pretty much all you do in the entire game.

Run Like Hell! starts out as a Nathan Drake lookalike named Joe, who is stranded on a tropical island and needs to run (non-stop, of course) in a straight line in order to get to his boat. Unfortunately for Joe, some cannibals who have been ripped straight out of a 40’s Looney Tunes cartoon (and rightly haven’t been portrayed as such in recent memory) want him for their lunch. The game takes Joe through a number of different types of environments, including beaches, rainforests and caves. Each environment has different kinds of traps set out, such as wrecking balls and bees that Joe must avoid in the rainforest environment. If Joe runs into too many obstacles, or mistimes his jumps, the cannibals catch up, and Joe finds himself on a spit roast not unlike which we see pigs on, complete with apple in the mouth. 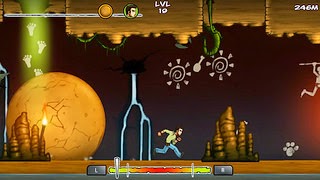 It’s a shame that Run Like Hell! does not really provide much in terms of variety, or adds anything real to the runner genre at all. I say shame, because Run Like Hell’s visuals stand up quite well when compared with other games in the genre, remaining crisp and clear and at a steady frame rate throughout. The game itself lacks variety however: there are power ups that help Joe keep away from the cannibals, but almost all runners have a similar power up system.

A runner game wouldn’t be complete without an endless mode, so of course we have one here too. It does not really add much to the experience, other than trying to beat your friends’ scores (assuming you have friends who have the title). Much like the mobile counterpart, Joe (or any unlocked character) can collect coins while trying to run as far as possible. Coins are traded in for additional characters, but unlocking these characters will take almost forever without the aid of the ‘convenient’ microtransactions. I would comment on the cost/ value of these microtransactions, but unfortunately at the time of review, the ability to purchase the in-game coins was not made available on the PlayStation Store. 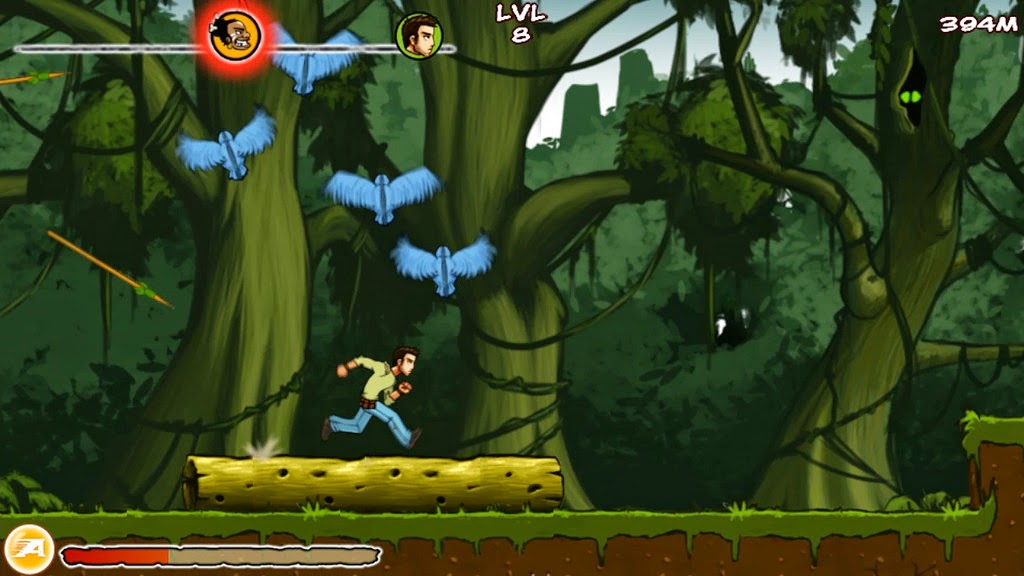 Run Like Hell! offers an online competitive mode which makes the game a little more exciting, though in order to gain an advantage, you will need to purchase power-ups using the coins you collect in Arcade mode (or through the microtransactions when they become available). Further, to enter a tournament costs 500 coins, so while it’s a nice idea in theory, it’s going to be pretty darned expensive if you’re going to play it much.

Run Like Hell! wants to be a good runner, and I can certainly see where Mass Creation was coming from with this one. The execution just isn’t there, microtransactions mar the experience, and the game does little to keep the player engaged. The way the cannibals are presented may offend some too – islanders as man-eating savages is on the wrong side of retro. It is a competent title, and works well when in need of something to play in a waiting room or on a bus, but this is a badly overloaded genre, and for most people Jetpack Joyride will be enough to scratch this particular itch.