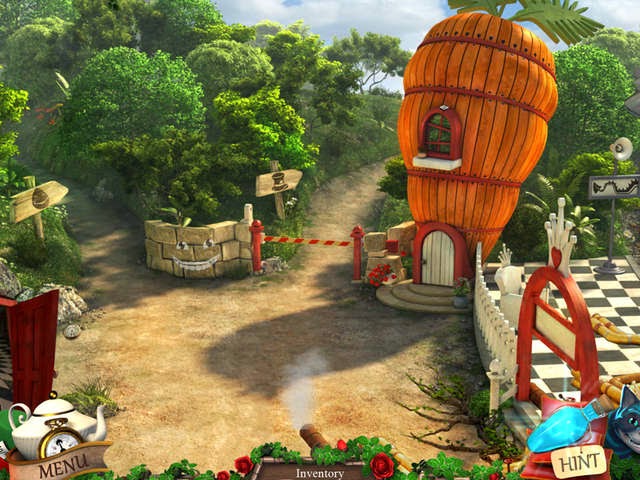 Alice in Wonderland is undoubtedly one of the most loved stories of all time. The Lewis Carroll masterpiece has been adapted and reworked into every entertainment and art medium known to man. Such is the power of the Alice brand that despite terrible reviews (and being a terrible film), the Alice in Wonderland film in 2010 was the second highest grossing film of the year behind Toy Story 3, clearing $1 billion worldwide. The base story is a timeless phenomenon.

And it’s the kind of narrative that lends itself to being an art game. Take for instance Alice: Madness Returns, which reworks the original Alice story to take it some very dark places indeed. It’s a testament to the power of the character that still, years after being released, the Alice: Madness Returns character costume remains one of the most popular among cosplayers. Saying all that, it’s disappointing that hidden object game, Alice – Behind the Mirror misses the mark in doing justice to the setting or characters that it is based on. 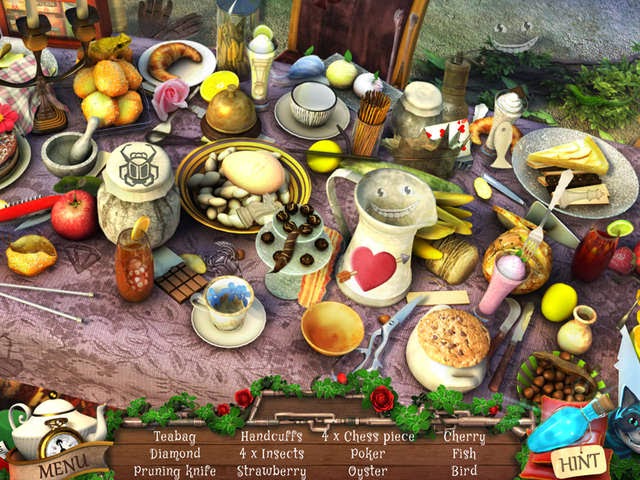 Being a fan of the Alice in Wonderland story, I was looking forward to the game when I first turned it on. There’s a certain freedom of imagination in the Alice narrative that lends itself to strange and crazy scenes where an artist can free themselves and be a little crazy. That’s what people look for in Alice stories, in fact. The initial impressions of Behind the Mirror are decent enough; the visuals you are met with in this game are just beautiful. The artwork of this game is exemplary. Having played quite a few puzzle and hidden object games where visuals can look either cheap or inconsistent, the sheer artistry on display here is impressive.

The developers also clearly love the story. Throughout the game, you can tap on the face of the Cheshire Cat that is integrated into the user interface, who will give a fact about Alice or Lewis Carroll. It’s a great addition to the game and a nice little Easter Egg for people perhaps less informed on such trivia. However, the act on tapping on the Cat is where the issues start. From the beginning of the game, everything is simply unresponsive. Having tried it on both an iPhone and an iPad and found the same issues on both platforms, it was clear there were a few bugs that still need to be squashed. The appreciation of the beautiful images is completely soured when the functionality of the game is so poor.

The hidden object genre is always a mixed bag in terms of quality. Some feel lazy, where the same basic gameplay is shoved into something that doesn’t look so compelling. The developer of Alice – Behind the Mirror, meanwhile, seem to have gone the opposite route – they’re so focused on the visual side of things that the gameplay feels forgotten at times. At 603mb, this game is going to chew up a lot of space on your iPad. 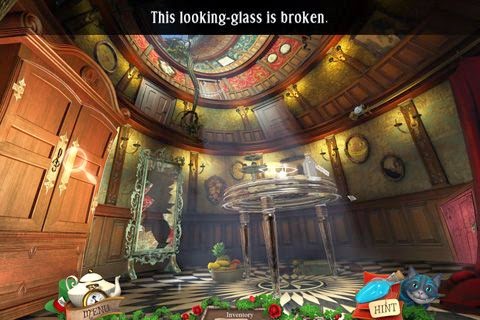 Alice – Behind the Mirror’s has the kind of gameplay that makes you want to forget the beauty of the game. It feels like you are being punished at every turn, having to retrace your footsteps constantly to search for objects you that you aren’t always aware that you need. There is a decent variety of mini-games beyond the basic hidden object searching but it doesn’t take long before the frustration starts to build up. At one point, I needed to track down a nail. I used the hint button and it showed me the area it was in. Despite tapping on the area multiple times, I was not able to pick up the nail. Eventually I did, but this is the kind of game where, if players can’t grab something the first time, they figure it’s not something that can be grabbed, and it goes without saying that this is problem.

Alice – Behind the Mirror is a spectacular looking game, but is that enough? I want to say yes because the artistry of this game is something to behold. If nothing else, while my daughter has just turned one, this is the type of game I want to play with her when she’s older. It can teach her problem solving, observation skills and an appreciation of quality art design.

At the same time I just want the game to be more responsive and not require players to travel back over ground they have already covered constantly. Alice in Wonderland is a story that is so vivid and paints such an imaginative picture and Behind the Mirror tries hard to do the same. It just needed to do more to make people think it’s a game worth playing.