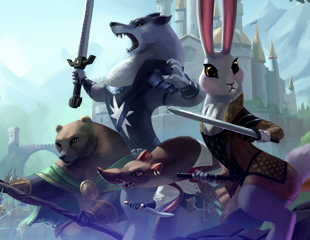 Armello is a new Kickstarter worth noting. Developed (largely) in Australia, the game is the brainchild of a small team, but it is a game of real ambition. As you can see from the screenshots and the like, it’s a gorgeous looking fantasy game where animals take up arms to go on adventures and the like.

It’s also a board game, rather than a standard adventure game. Though there’s a prototype that the developers build when testing out the mechanics of the game, Armello is designed from the start to be a digital board game. This means that it takes advantage of the unique capabilities of the digital medium.

For instance, in a typical board game you’re asked to sit back and wait nicely for your next turn as other players take their turns. But in Armello? According to the game description on its Kickstarter page: “After you hit the ‘End Turn’ button you’ll be busy equipping items, recruiting followers and purchasing talents in your hero’s unique talent tree. Maybe you’re playing cards to the board as Perils for other heroes to stumble into or perhaps you’re playing cards to strike up temporary allegiances… they’re always temporary.”

Sounds intriguing, right? Well, you wouldn’t be the only one. The Kickstarter launched around a week ago, and it’s already at $106,000 (at time of writing) – half way to its initial goal of $200,000. It looks like this one will resonate with consumers.

Busy as his time is in running the Kickstarter, we sat down with League of Geeks (the developer) Founder and Director, Trent Kusters, to get his thoughts on the game and some more insights beyond the exhaustive information that’s on the Kickstarter page itself.

And of course, if you want to back the Kickstarter yourself, here’s the link.

Digitally Downloaded (DD): What inspired you to produce a digital board game, and are you concerned that that genre is relatively “niche”?
Trent Kusters (TK): We were all playing board games on our iPad and at the time (three years ago) they were uniformly atrocious. We were looking for something to collaborate on and as tabletop players the genre was something we were interested in. As experienced video game developers it was something we knew we could do well.

DD: Where did the gorgeous art style come from?
TK: Ty Carey, our art director. Really. He’s our aesthetic guardian. He went out and found our lead character designer, Adam Duncan. The same gent who led production and did a heap of work on the Armello trailers too. Ty, he and myself have worked very closely over the past two years to ensure that Armello has its very own distinctive look. Of course, there are a number of artists on the project contributing to it and anyone can provide feedback, so it’s been forged in fire.

DD: Why have animals as heroes? Is there a specific theme that you’re aiming for in this game?
TK: One of the directors loved Redwall growing up and always wanted to do a big medieval epic with animal characters. It’s not just that though, it works on a number of different levels that provide benefits to visual design, narrative design, emotive response, etc. DD: It’s an ambitious Kickstarter goal that you’ve set yourself. How are you going to go about hitting that target?
TK: We strongly believe that we’ve got an awesome game. So leaning on that. Also though, I’m flying around the US and Canada to meet people and keep the buzz alive. We’ve got people responding to everyone’s answers and questions. It’s just a matter of staying on point and having some cool updates – which are coming soon.

DD: I know it’s early stages, but are there plans to branch this out into a franchise? What else could you see yourself doing with this world?
TK: Yes. Definitely. We built Armello from the ground up to work across multiple mediums and formats. This world is simply too rich to not fully explore in every possible way.

DD: In the video we can see that you prototyped the game as a physical board game. Are there any plans to perhaps publish that as well?
TK: We’d love to make the physical board game, but no plans at the moment. Even though we prototyped on paper, we designed it from the beginning with digital platforms in mind, so it would take a heap of redesign and currently we’re focusing our full efforts on the video game. DD: It’s great to see innovative game development coming out of Australia. How challenging and what opportunities would you say are in the local market at the moment for game development?
TK: There are great opportunities for developers here and we have an amazingly warm and active community, but at the same time, a lot of the most important opportunities for developers just don’t exist here. The worst factor being how far we are from the international games community. I spend a lot of money and time overseas just to make sure that LoG is involved in that international conversation and that we have access to the world’s greatest minds in games. The conversation you immerse yourself in as a creative is critical to the quality of the work you output. That said, the Australian developers that understand this are consequently some of the best in the world. So yeah, Australia is ace for game development… if you remind yourself daily where you need to be and understand how to get there.

Don’t forget! We have TWO physical copies of Demon Gaze to give away!