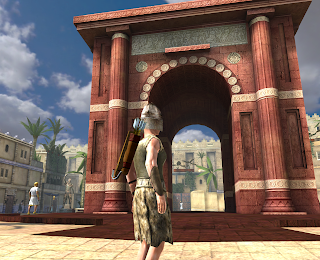 The Shadow Sun floored me from start to finish. It’s been quite some time now since a developer took on the task of an exclusive, new, RPG for the iOS platform that offers modern production values, but that’s precisely what’s happened here, and the result is a game that is essential for anyone with an Apple device, because this is the equal – if not better – of most of the indie RPGs that you can find on PC or console.

The developer, Ossian Studios, has been around for 11 years. Started in 2003 by Bioware veteran, Alan Miranda, Ossian has spent its entire history developing RPGs; it was previously behind the Neverwinter Nights expansion packs: Mysteries of Westgate and Darkness Over Daggerford. That same methodology towards game design has made the move to its attempt at an original IP; as a fan of such classic RPG action, The Shadow Sun felt immediately familiar.

The familiarity stems from the combat and narrative structure, which we’ll get on to in a moment. What isn’t familiar is the setting, which is both new and very compelling. Set in a fantasy Arabia The Shadow Sun is exotic, colourful, and equal parts glamourous and dangerous. From the harshly bright yellow sand to the glistening cities that provide a thin veil of culture and elegance that the wealthy indulge in over the horrific violence that besets the majority poor, the world of The Shadow Sun is one of fundamental class divide and political angst. It’s a theme common to this setting; where human ugliness juxtaposes so effectively with its sense of beauty and aesthetics. 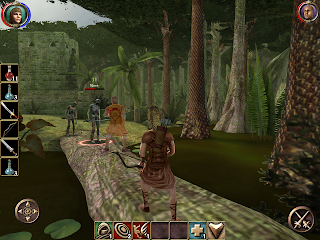 The game tries its best to build on that concept in a meaningful way too. Unlike any other attempt at a mobile-first RPG to date, The Shadow Sun takes a genuine stab at building a lore around the games’ world, with players able to pick up books that offer tasty bits of information about the world’s history and environments. Nothing so complex as Skyrim’s libraries filled with literature that can take hours to read through, but Ossian Studio’s game offers something to contextualise the narrative, and that’s a greater effort than what we’ve seen previously.

Looking past the setting, at core The Shadow Sun offers a slightly archaic combat system that doesn’t really offer enough variety in actions by modern RPG standards. A small hotbar on the bottom of the screen and an attack button offer players all the skills they’re going to be able to use, while a somewhat limited skill tree keeps character development focused. Far from being a problem though, this combat system feels both quaint and charming; a throwback to a classical era of RPG design where the virtual dice rolls were as important with regards to success as player skill was. The Shadow Sun has a traditional approach to game design, and for RPG veterans it’s appealing for that.

Equally traditional is the ability to tackle the game’s major challenges in a couple of different ways (usually a choice between social and combative resolution). These aren’t necessarily moral choices critical to the plot, and players are going to complete the same dungeons and fight the same bosses regardless of what choices they make, but there fact is that there are some played choices in the game, and other game developers (such as the folks that made Shadowrun Returns) should take note; you might still mandate that players infiltrate a prison, but if you give them the choice between sneaking in through the sewers, or dressing up as a guard, the player is going to feel more involved in the quest, because it becomes their quest. 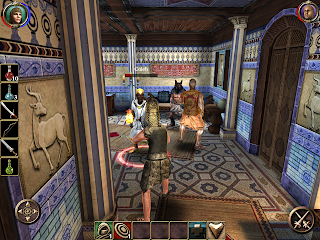 Throw in plenty of completely optional side quests and a slightly clunky journal system, and The Shadow Sun continues to reinforce that it’s a game that’s about a generation old. But in other areas the game manages to click into the nostalgic appeal of a classic old game while using a system that manages to capture the best bits about games of those days while largely doing away with the more frustrating elements. For instance while there is difficulty spikes, The Shadow Sun is not of the kind that requires hours of grinding. Completing those is usually enough to be at a high enough level to take on the various game’s bosses. The game is also over in a reasonably short time frame, as befits a developer that cut its teeth on expansion packs, The Shadow Sun is over in about the length of time of a good expansion pack.

That length is my only real complaint about The Shadow Sun, because it is over before I really wanted it to be. As an exclusive mobile RPG it’s yet another example of why folks who had previously overlooked mobile platforms for their gaming potential should reconsider that stance. I can only cross my fingers and hope the game is a success and the developers are encouraged to continue building on the interesting fantasy world that they’ve built and not fully explored.