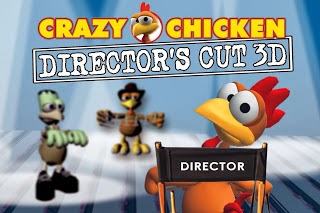 The Crazy Chicken franchise has been a runaway success for developer Teyon on mobile platforms and understandably so: its simple pick-up and play nature is perfectly fitting for gaming on the go. Yet, this whimsical series has flapped its way onto Nintendo’s 3DS eShop and DSiWare services before and its set its scenes back in action once again with Crazy Chicken: Director’s Cut 3D.

Stripping Crazy Chicken’s gameplay down to its bare bones will find that it’s little more than a repetitive gallery shooter. Using the stylus on the lower touch screen to maneuver a firing reticule on the 3D display screen of the 3DS, you’ll try to make each and every shot count as you rack up the preset quota for each bird type to complete the wave. Remaining bullets carry over to the next set piece in the scene, where a new quota appears and the process continues until you run out of ammo. It’s simple, repetitive and if left on its own, it would lead to a direct path of boredom pretty quickly. 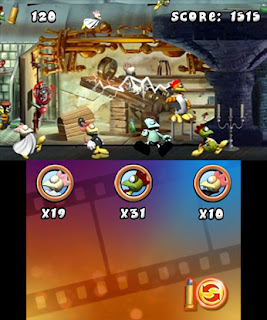 Thankfully, this isn’t the case here. Just like the other misadventures the Crazy Chickens have endeavored upon, the two scenes – Science Fiction and Horror – are filled with all sorts of blockbuster movie references and feature a number of puzzles to figure out to rack up the highest score possible. The crazed chickens take on Star Wars, The Exorcist, Men in Black and a handful of other hit movies between the two scenes and with repeated play, you’ll find that each scene continues to grow in length – offering a few new laughs in the process.

Like other gallery shooters, the main objective is to achieve the highest score possible. With the inclusion of online leaderboards, there’s a good deal of added replay value here. Oh, and don’t forget to read the digital manual that’s included with the game. Trust me, if it’s the top of the leaderboards you’re after, you’ll be needing the tips that are packed away in there.

Crazy Chicken: Director’s Cut 3D is a fun little gallery shooter that doesn’t reinvent the wheel, so to speak, yet its cheap asking price and humourous approach will keep your interest for a bit from time to time; hardcore leaderboard enthusiast will find a little more sustainable replay value here. While the series isn’t quite as fitting on a gaming console as it is on mobile platforms, it’s still a good egg to hatch on the 3DS eShop.