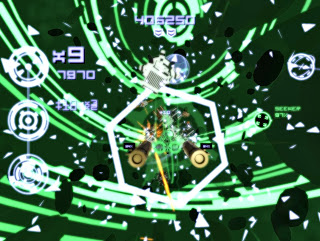 Kraken Empire’s upcoming shooter, Kromaia, is aiming to be an experience like no other. Promising a complex piloting system featuring six degrees of movement, the 3D shooter aims to strike a balance between arcade style action and a deep sense of exploration. It’s an ambitious goal for a small development team, and although the project might be alienating for some, it’s clear that there will be a niche of players who will fall in love with this frenetic and exuberant shooter.

The big draw of this game, for many players, will be its six-degrees-of-freedom movement. This actually sounds a lot better on paper than in practice however – rarely will you ever need to utilise every possible movement option. The system does feel rewarding for players willing to play creatively and test out what they can do, but more casual players can ignore the rolls and strafes to play Kromaia as if it were an iteration in the Star Fox series.

The added depth of movement also calls for a fairly difficult control system. The default controls are the WASD keys for accelerating, braking and strafing, the mouse to change directions and the mouse wheel to strafe up and down. Q and E performs rolls, if at any point the other movement options aren’t disorientating enough, and the spacebar allows for a high speed boost. This setup is fairly functional, although mapping those commands for a gamepad will prove difficult. You’ll have two thumbsticks devoted solely for movement, leaving shooting, boosting and rolling to the trigger buttons. It’ll take a while to suss out something which plays naturally, although the game allows players to adjust controls on the fly so you’ll be bound to slip into something comfortable eventually.

The demo offers four different kinds of ship, which are all nicely varied. The first is an artillery type which fires projectiles straight forward. The second is a precision oriented ship which fires lasers, and has a secondary attack which focuses a huge beam to damage anything you’re facing – very cool. These ships are fairly simple and feel reminiscent of on-rail shooters like Star Fox. There’s no reticule though, so aiming can sometimes be a hassle. The third ship is fitted with a homing cannon and seeker missiles. This is like playing Kromaia on easy mode, and I highly recommend not using it unless you’re really taking a beating. The last one is the most interesting of the lot: it’s a melee oriented fighter which summons a giant sword to destroy anything in front of you. Whoever decided to equip a spaceship with a sword deserves a medal – this ship actually forces players to learn enemy behaviours and find the safest way to approach them. If you want to have the most unique experience and dare I say it, the most fun, give the melee ship a try. 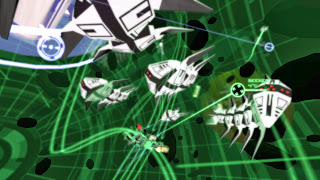 Another feature Kraken Empire advertises for Kromaia is a complex, self organising AI for enemies. This means that encounters aren’t meticulously choreographed like the majority of rail shooters, but instead adapt themselves to your play style. It’s a risky trade off which pays off in the end – while randomly generated enemy patterns can lead to a bland, messy experience, the enemies in Kromaia know how to organise their attacks. They will swarm, engage and retreat based on how many peers they have and how quickly the player is moving in order to constantly remain a threat. They’re also programmed to fly around and attack you from the front so you won’t need constantly turn around to get a hold of your surroundings. There are still a few kinks in the system (the enemies have no idea what to do if you’re staying still, for example) but it’s certainly exhilarating when your enemies coordinate in patterns to attack you rather than flying at you randomly.

It’s unfortunate that the demo only includes a score attack mode because it doesn’t really feel indicative of what Kromaia’s engine is capable of. With such a complex movement system, Star Fox-style flying and shooting feels almost like a waste of its potential since it’s never necessary to pull off any tricky dodges or turns that the engine facilitates. The final game promises a fully fledged adventure mode and a time trial/race mode which would hopefully put one’s manoeuvring skills to the test. If a stylish six-degrees-of-freedom shooter sounds like it would appeal to you in any way, I highly recommend you go check out Kromaia’s Greenlight page. All this game needs to be truly great is ample content to match its engine, so with the right amount of support Kraken Empire might just have a real hit on their hands.