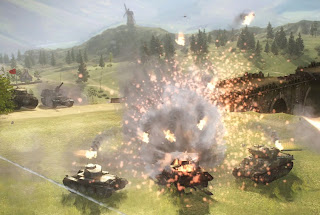 World Of Tanks is often held up as the pinnacle of free-to-play gaming, as a perfect example of a game that is balanced enough to be profitable for the developer, while not forcing players to shell out real money in order to be competitive.

The basic idea is to take a military shooter, and transpose it into a skirmish conflict between a small group of tanks – 13 a side, to be precise. The catch is that once a tank is destroyed, that’s it for the player. There’s no respawn.

Immediately this lends an intensity to the firefights, as the consequences for making a mistake can be that much more dire. Having been the one to have made a stupid mistake and get destroyed within the first couple of minutes of one match, I can attest to how frustrating it is to sit there and wait for the next 20 minutes of combat to play out, unable to join in the action in any meaningful way.


Rather that a fault, I found this hugely engaging. Suddenly every shot seemed to matter, and every move needed to be carefully considered. The feeling that I was doing something meaningful for team in defeating an enemy was enhanced by that much knowing that the enemy I just took down wasn’t going to be coming back.

Unfortunately I stopped caring about my teams after the first couple of matches because, as with every other military shooter, it’s just filled with obnoxious children and manchildren who seem to take joy in ruining the experience for everyone else. Unlike some of the better multiplayer-focused games out there there’s no immediately easy way to report these players either. I’m sure it’s buried somewhere in a menu, but I couldn’t find it. For a game so heavily reliant on teamwork, to have to sit there and put up with some people in desperate need of a good smacking from their parents really is a dampener on the overall experience. 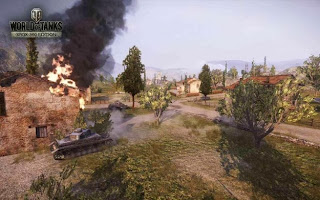 But that aside, World Of Tanks is indeed a load of fun. Environments are large enough that there’s plenty of opportunities to set up ambushes and traps, and these environments have great features like towns, trees, and bridges to fight over. It all feels authentic – almost like a tabletop wargame setup, only instead of miniatures and dice you’ve got radio controlled little tanks that actually shoot at one another.

As a former tabletop wargamer there was a hefty dose of nostalgia when playing this game, and the highly collectible nature of the tanks didn’t help things there. There are dozens of tanks to unlock and upgrade and this can be done nice and slowly by participating in combat, or quickly by spending real money. But regardless of how you choose to play, it can be done, and I appreciated this – there’s no real penalty for choosing not to spend real money.

I’m not a big fan of military shooters, but I find World Of Tanks surprisingly palatable. With no excesses in gore, not insane need to build killstreaks and no hugely overpowered weapons to unlock the focus in this game is solely on the teamwork and the tactics, and that has made it one that I’ll definitely be checking out when the full version launches.

I might even get better at the game then.

DDNet’s Games of the year 2013: Australian Game Of The Year award