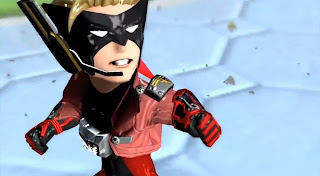 Platinum Games’ titles are nothing if not divisive. The Wonderful 101 is no different. In fact, with this specific game my Twitter feed contains comments ranging from “game of the year,” right through to “what the heck is this thing?”

Division over the quality of a game isn’t anything new to the games industry but the range of opinions for this specific game seems to hold no middle ground whatsoever. People either love it, or hate it.

So I’m in a pretty lonely group, because I fall into the middle ground. The game’s concept and style are fun to experience, but as a game to play it’s limited and physically uncomfortable and is more of an argument against a dual screen experience on the Wii U than an argument for it. 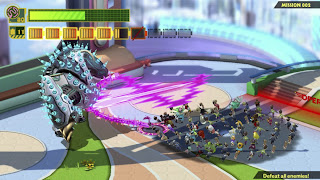 The issue with The Wonderful 101 is its central mechanic – building objects to deal with problems by drawing on the touch screen. Want a sword? A quick swipe upwards on the Gamepad touch screen will turn the “101” into a sword and away you go. Want a giant hand to turn a giant gear to open a giant door? Draw a circle to do that. As Platinum only knows how to do high-octane in its games, players are often asked to make these touch screen drawings at a very rapid pace and with a surprising amount of precision.

The problem is that in the intensity of the game’s action, things don’t always work as I, the player, want. There’s button presses involved and it’s uncomfortable and unweildy to be holding the Gamepad in the one hand while drawing with the other and then pressing buttons to execute actions with the kind of split-second timing that Platinum knows how to do better than anyone. There are rare moments when the Gamepad’s screen feels too small to properly execute the bigger drawings that you’d like to make. And there was the odd occasion where stuff didn’t work like I wanted it to. Perhaps I was being too frantic to try and stay on top of the situations I found myself in, but for a game of this pace, I needed to the engine to handle by desperate taps and swipes far better than it did. 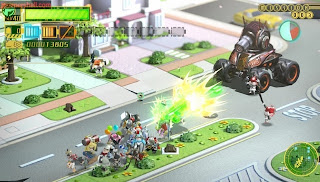 Now these are all quite uncommon issues, but it was just enough to be just frustrating enough for me to lose some interest in the game. What is left of the game is a generally uninteresting level design which is functionally very similar to a brawler where you’ll clear out one area to be driven to the next one. Enemies manage to be difficult while also deathly boring thanks to a rather generic series of designs. This is compensated somewhat by the bosses, which are detailed even if, again, surprisingly generic for a Platinum game, but getting to those bosses is more of a slog than it should be.

The heroes of the game – all 101 of them – also lack personality in the game as a consequence of the fact they’re a swarm rather than a set of individuals. Perhaps it was Platinum’s intention to build a game free of character, and if so mission accomplished as the only hint we get of characters and a narrative occur between missions. Sure we’re meant to laugh along with the French fat dude that stands in as the Green Ranger, but on the field of battle he hasn’t got much more personality than any other small blob of green that you can think of. Perhaps it was Platinum’s sense of humour that the Power Rangers look-a-likes do nothing more than battle ridiculous enemies in an hyperbolic manner. But even if this was the intention there are consequences to the decision; it’s nearly impossible to relate to this game because they’re nothing for the player to emotionally connect with. 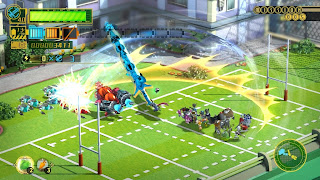 I think it’s most telling that the best parts of this game are those brief psuedo-puzzles that require players to use both screens at the same time; for instance one screen displays a number that players need to manipulate a combination lock on the other screen in order to proceed. These aren’t brain teasers in any sense of the word, but the do manage to provide a bit of intellectual variety to a game that is otherwise more interested in being about speed and action. And the cockpit scene is the first time since the Wii U’s launch titles (NintendoLand, for instance) that we’ve genuinely see the Gamepad add something unique to the experience. It’s a pity these sections are so brief.

The over-the-top action is fun and as with most other Platinum games, style was always going to take preference to substance. As something of an overexaggerated Saturday morning cartoon, The Wonderful 101 has a visual charm that helps to hide its shallow core, but ultimately this game doesn’t really provide enough content to back an argument that it’s a classic. “Content” doesn’t have to mean “length,” it can also mean the richness of themes or a classic replay value. The Wonderful 101 might take 15 hours to work through its 25 or so missions, but the game is over after a single play through, and it doesn’t really stick in the memory for long afterwards. With all respect to the people that did enjoy this game, it baffles me completely why anyone would consider it more than throwaway entertainment.

Metal Gear Solid; focusing in on the boobs, yay or nay?

Be sure to snap up those last-minute EB Games Expo tickets, Aussies