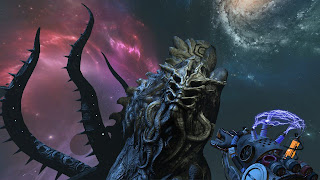 It is so easy for me to imagine the conversation which birthed this project;
[Within fledgling quasi-independent game studio 3AM Games…]
John: “Hey Dave!”
Dave: “Yeah?”
John: “You know what Valve Software’s Portal needed?”
Dave: “No.”
John: “Cthulhu!”
[And so began the development of Magrunner: Dark Pulse.] 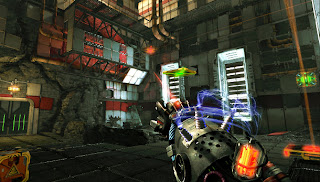 Magrunner: Dark Pulse, developed by 3AM Games and published by Focus Home Interactive, can indeed be best summarized as Portal with Cthulhu. Granted, that may be a bit unfair, especially when the main gameplay feature of Magrunneris entirely different from that of Portal, but that description certainly fills the most holes in one’s mind. The player will be guided through a series of puzzle-centric chambers in a first-person perspective where the games world slowly decays into a dark, impossibly-crafted dimension filled with monsters. The only missing, absolutely essential piece of the game is that instead of portals players will utilise the magnetic powers of repulsion and attraction to solve puzzles.
Those magnetic powers are put to good use in the test chambers. Not only do most of the chambers have distinct challenges which can stump players, but every so often those chambers introduce special uses of the magnetic powers that help to establish the complementary mechanics of future puzzles. While the controls of the game never receive the same treatment, a quick look into the options menu fixes that easily. The architecture of the game is especially worthy of praise. The level designers obviously worked hard, as the smallest of details are present among both the encapsulating futuristic look of the games beginning to the otherworldly structures found at the game’s end. The blending of those two styles, mostly present during the majority of the game, is a welcome mix and one of the reasons I would use to persuade anyone interested in visual design to buy this game. 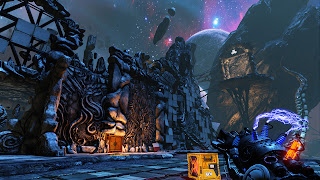 However, besides nailing its objective and earning itself bonus points, there is one major hindrance that bars Magrunner from being great; it has no focus in its narrative goals. What I mean by this is that story elements are, more often than not, scattershot and fragmented. At first this everything-on-the-menu approach works, as before the tonal shift this gives the impression of a busier world than the actual game is capable of portraying. But after that tonal shift, these unrefined elements don’t mix.
The first incompatible narrative aspect of Magrunner is that the game appears to feature a, “Descent Into The Facility,” progression, where each following level is less of a test chamber and more like the guts of a factory. Suddenly, from out of nowhere, this type of progression outright stops. The same goes for the early monsters; they show up and suddenly stop doing so, only to reappear as obstacles rather than threats within the last 15 percent of the game. The accompanying visions that the main player character is supposed to have only apply to one point in the story, which is eventually explained through dialogue. The decrease of conversations after the tonal shift is offset by an unusual increase in conversations several chambers later. Established story points conflict with later story points. All of these elements combined with mediocre voice actors create a narrative that is at best the equivalent of a popcorn movie; an entertaining way to waste time (clearly you don’t realise that Cthulhu is just messing with your head… -ed)
If you are looking for a clever and structured narrative to go along with your puzzle game, I cannot recommend Magrunner to you. Its scattershot narrative most serves the purpose of the exploring a testing facility warped into alien architecture. However, if you are willing to ignore the unfocused story, then you will find a challenging puzzle game that is quite the beauty to look at.