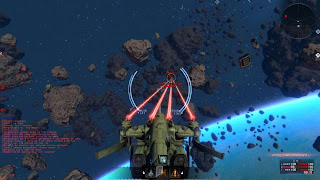 Star Conflict is a free-to-play MMO space-flight game. Players are divided into three factions; the Empire, the Federation, and the Jericho. The factions mostly serve to differentiate player gameplay styles by doling out faction-specific player boosts and to give context to the game’s main player vs. player (PvP) battles in the Sector Conquest mode.
In Sector Conquest, factions will be pitted against each-other in moderately-sized PvP battles to determine which factions will control specific sectors. The overarching goal is to conquer all of the sectors on the galaxy map, meaning complete universal domination. Unfortunately for all its promise Sector Conquest doesn’t really do anything to distinguish itself from standard team-based PvP modes already in most MMOs. There are no extra rewards or any motivations from participating in that mode nor is the gameplay experience or context unique in any sense. This unfortunately has the nasty side-effect of every player treating the game as a standard multiplayer game with a global chat. By the standards of an MMO, Star Conflict would have already failed based on its lack of encouraging genuine community play and interaction. I have no idea whether or not Sector Conquest will be changed by the time Star Conflict exits its current testing phase, but the mode must be changed if it were to acquire the proper label of an MMO.
However, not meeting the criteria of one quasi-genre does not make any singular game bad. Star Conflict is, at its core, a space-flight game. This entails the standard tropes of maneuvering in 3D space, all of which are well implemented. By that I mean that the controls are easily reachable with one hand and are very responsive. The combat in the game, while simplistic, works with the flying. The player can use a handful of special types of cannon as their main weapon, equip different missiles, and attach modules that give various bonuses when activated. The combat is admittedly too simple for its own good at times, but it is serviceable within the various game modes to make an enjoyable experience.
There are a handful of gameplay modes within Star Conflict, most of them concentrating around PvP. The first is Sector Conquest, which was detailed earlier. The second is the standard team-based PvP, where two teams eliminate each-other while attempting to capture bases to secure more lives. The Arcade mode strips down the base-capturing of the standard PvP and solely focuses on the combat. Realistic mode forces each player to only use their four separate spaceships once in the entirety of the match, with the winning side defeating all of the ships of the opposing side. The final mode of the game, the Missions mode, is a Player vs. Enemy (PvE) affair with a handful of different objectives per round. The PvE can be good fun if played with appropriately-level teammates as otherwise the last several objectives tend to hit an exponential curve in difficulty. 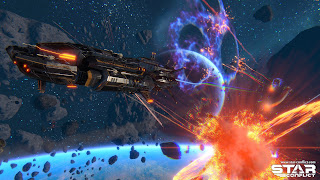 One thing that, in my view, will undoubtedly shape the entire experience of Star Conflict is its approach to its free-to-play monetisation. Star Conflict is a game where using ships in combat will weaken those ships and force them to undergo repairs after the battle ends. However, by using the paid currency of the game (‘Gold Standards’), players can buy ships and parts which will never have to undergo repairs after any combat sequences. This is extremely unfair as repairs can be a massive money sink to non-paying players and I can only see a split and sour community arise from this design decision.

Overall, in its current state Star Conflict is a failure of an MMO and a serviceable space-flight game with what could be a very decisive free-to-play model. Still being in its incomplete stages, Star Conflict developer Stargem Games can refine and add to what they have already established within the current version of the game. I wish them the best of luck in creating the game they envision.

As a disclaimer; I was using a premium account for this Star Conflict preview. Not only was this premium account completely maxed out in terms of levelling, but I had over 600 million credits and over one hundred thousand Gold Standards, the pay-to-acquire currency within the game. Coupled with having access to all of the spaceships, every single restricted part, and selecting whichever progression bonuses I wanted, I am not unwilling to say that my experience has been pampered and will not reflect the experience of the average player.

Microsoft and Zynga? More and more evidence that it might be a thing