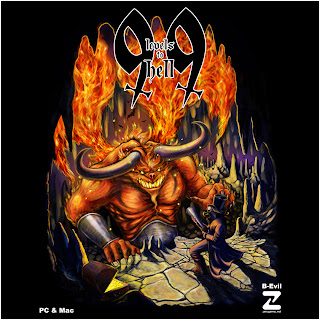 While randomly-generated stages in a video game can offer great variety, they can also easily be exploited to make up for less work on the side of the developer. Bending pseudo-random numbers in certain ways can allow for enormous amounts of video game content to be created within a very short time-span, bringing into question the value of meticulously hand-crafted content.

However, randomly-generated content can also quickly lead to repetitive content where the player cares more about the position of their goals rather than the environment as a whole. This is why many of the most successful video games with randomly generated content are open world games; by default many open world games are not goal-driven and as such environmental traversal is not an issue to begin with.

Today’s subject of discussion is 99 Levels to Hell, a shooting-platformer rogue-like that uses randomly-generated content. Unlike many of its brethren, 99 Levels uses a clever set of tricks to avoid the repetitive randomly-generated environments. And not only that, but 99 Levels is quite the entertaining game on top of it all. 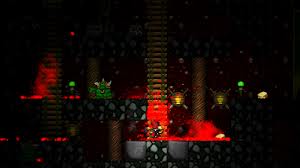 It is quite difficult to pin down the setting and context behind 99 Levels, but for some reason you are meant to descend through a series of floors to kill to the big-bad of Hell, Diablo. Of course, the least of your worries in your journey is the exact reason why you’re doing it and more concerning is the many deadly traps, enemies, and bosses. Slight movements in one direction or another can lead to triggering or colliding with a deadly force that becomes very fixated on murdering the player. 99 Levels calls itself a rogue-like for more than its random content; enemies can easily cut you down to your last heart of health, the traps are recognizable yet slyly hidden, and the unspecified time limit at each level has keeps the player on their toes. Of course, the rogue-like tag also means that the odds are not entirely against you, as occasional piles of gold, weapon upgrades, gold shops/casinos, and elevators appear throughout the stages.

The deadliness of 99 Levels to Hell is the major reason why environments don’t become dull. As many of the stages offer multiple paths to a single point, it becomes the player’s job to deduce which path is the safest and avoid hotspots of enemy activity and various traps. It astonished me when I realized the extent which I was weighing the different paths that a randomly-generated stage had provided me. If anyone is still cynical about the potential of randomly-generated content, I absolutely recommend this game to them. 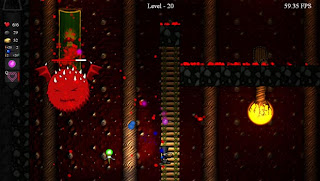 Of course, the game design of 99 Levels to Hell has its faults. Some of the games bosses can be extremely difficult for a player if they have found no upgrades (which are generated randomly); so much so that players will need to run through a set of stages again just so that the player has some power-ups to even have a chance against the boss. The portals in some stages, while adding to the level design variety, sometimes are the only way to proceed in a level and can drop the player into a pit of enemies. Other than those two complaints, 99 Levels manages to keep its environments interesting and glitch-free.

A great addition to the mostly well-crafted game design is the art style. Not only is the cartoon aesthetic compatible with the more outlandish weapons and enemies in the game, but it also is not too unbalanced toward the cartoon side of the spectrum to demolish the tense moments that players face. The aesthetic also shows its range thanks to a much-welcome change in environmental theme every ten floors. 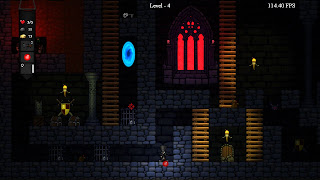 The sound design, on the other hand, is a mixed bag. For some, the sound of collecting gold will be too similar to a certain plumber’s sound when collecting gold coins. Others may find various hissing sounds to be extremely irritating. However, the music itself does its job well to convey the mood, whether that mood is tense and slow dungeon crawling or fast-pace rock when facing a boss.

99 Levels to Hell does randomly-generated content justice if failing in just a few aspects of its design. The difficulty and visual style all mesh together with the random content to create something fresh and worthy of playing.

Interview with Nippon Ichi President: “We are looking to out-do Disgaea”