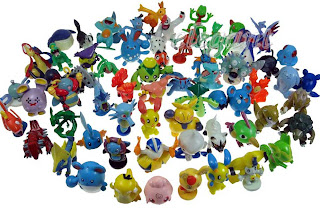 Purely as a business opportunity, Pokemon Scramble U is nothing short of a masterstroke, and I can’t see this doing anything less than blowing Skylanders and Disney’s upcoming NFC title away like paper at a hurricane.

For those who haven’t seen the news as yet, Pokemon Scramble U is a game that allows players to place Pokemon miniatures on the GamePad to enhance the game’s gameplay.

Let’s just sit back and think about that for a second. Players can buy Pokemon miniatures, and those miniatures will enhance this Wii U game.

There are 649 Pokemon designs! These miniatures will be sold at Pokemon Center retail shops in Japan. I have been to these stores in my trips to Japan and there are lineups to go in. Each and every single morning before it opens.

We’ve already seen this business model work wonders for Activision with Skylanders, and the expectation is that Disney’s game will also be successful in adopting this model – sell the game, then sell the miniatures to make a massive amount of money from each customer. In a sense it’s physical DLC, but the attach rate is far ahead of traditional DLC.

But Pokemon Scramble U is going to do better than either of those games, and here’s why: Pokemon has always been about collecting these critters, and so many generations into the franchise the fans DNA is positively infused with the need to have every single one possible.

And so there are going to be significant numbers of people who will buy every single Pokemon miniature designed purely to “catch ’em all.” You’ve got to feel sorry for the parents, but this move is nothing short of a masterstroke by Nintendo and Game Freak.