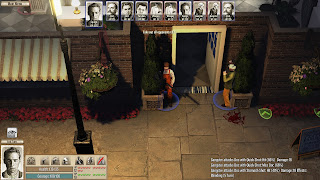 Sinister things are happening in Atlantic City. Crime rules the streets. Smoky dives serve home-brewed hooch in china cups. Order is maintained through the swing of a baseball bat. Cops count their money and look the other way. And, behind everything, there’s the sound of the city. There’s despair in there, and hope, and maybe a little jazz. But if you listen closely – very closely – there’s something else too. Something…tropical.

Omerta: City of Gangsters is the latest offering from Haemimont, developers of crowd-pleasers such as Tropico 3, Tropico 4, Tropico: Absolute Power and – my personal favourite – Tropico: Quick Drying Cement. With a back catalogue like that, it’s safe to say that they’ve mined the Tropico vein until there isn’t any Tropico left. Well, until Tropico 5 turns up, anyway.

In the meantime, it’s good to see them turn to something fresh. Omerta is about violence, thuggery, racketeering and amoral goings-on. The main in-game currency is dirty money, and there are plenty of ways to get it. In your journey to become the Big Boss you’ll set up bookmakers, Ponzi schemes, smuggling rings, protection rackets and bogus pizza joints. Banks will be robbed. Rivals will be beaten, fatally. For every do-gooder soup kitchen there will be two illegal distilleries. When it comes to subject matter, Omerta tries very hard to be different to Tropico. The anti-Tropico, if you will. 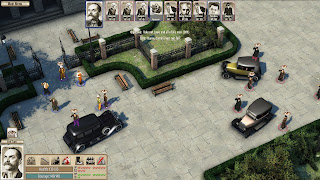 The game starts when your handsome avatar arrives in a nicely detailed, but rather drab-looking Atlantic City. After some light character generation, you hit the isometrically-rendered streets in search of your first big break. The first order of business is to scout the area. Scroll the map around, find the telltale icon that indicates the presence of an informer, and click on it. One of your neophyte minions will scuttle off, pay the required price, and come back with the gen. More icons appear. Some of these will be joints, places you meet your public and sell your illicit wares. Others can be used for the brewing of beer, the manufacture of ardent spirits or the running of guns. Still others contain denizens of the city – rival businesses, bent politicians, law-abiding citizens, or even cops. Manage things well and you’ll quickly establish a satisfyingly complex underground economy.

Then the shooting starts. At various points in the campaign – sometimes as a story mission, and sometimes at times of your choice – the action switches from the cut-and-thrust of dirty business to the cut-and-thrust of dirty fighting. It’s here that the RPG-lite elements come in. Your minions all have various stats and talents, and they’re never happier than when they’re using them to eviscerate their rivals. Combat is a turn-based affair which, strangely enough, feels like a hybrid of the early Fallout games and the newer Jagged Alliance titles. It’s never that hard, and it lacks the thrills of the recent XCOM remake, but there are enough tactical options to make it an agreeable diversion. Get it right and you’ll make some money, your crew will level up, and they’ll nurse their injuries for a while. Get things wrong and one of your boys might end up in jail. Omerta is gentle in the way that it punishes you for failure. 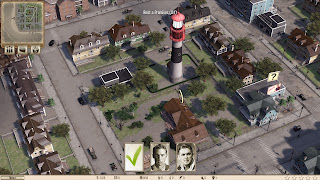 Even when you win the fight and return to the main city view, things never become too tough. Occasionally, the cops will investigate, but they’re easily bought off. Your dirty empire will grow and grow, and then you’ll win the scenario and the map will open up with more locations to conquer. Omerta is a light game: light economy-building, light role-playing, light tactics, light multiplayer, a soundtrack which features some excellent light jazz. Mafia Lite.

It’s time to get controversial: I think we need more games like this. Not every game needs edge-of-the seat excitement. Sometimes, it’s enough to have something which is easy to play when you can’t muster the energy for anything more taxing. More than once, I’ve started a map and pottered along happily for a couple of hours before looking at my watch. I can’t recommend this game for anyone who wants an unsettling, visceral experience, but it’s still a pleasing and well-produced title.

Listen to the city again. Can you hear that faint calypso beat? That’s the spirit of Tropico. Omerta isn’t that game, but it hits all the same easy-going gameplay notes. You want to be the Boss? You can’t be the Boss. El Presidente is the Boss, and he always will be.