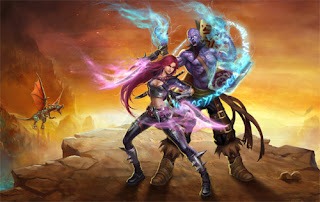 Though the MOBA (Multiplayer Online Battle Arena) genre traces its roots right back to 2003’s Defence of the Ancients Warcraft III custom map, it’s fair to say the genre really took off in 2009 with League of Legends.

Given that the genre has only had a unique identity for the past three years makes it one of the “new kids on the block.” A quick look at the Wikipedia page shows a startling short list of MOBA games despite League of Legend’s runaway success, which suggests that developers are only just now catching on to the fact that this is a genre that people enjoy playing.

So what characterises a MOBA game? It’s a very basic competitive action RPG where heroes start each battle at level 1. Soldiers continuously spawn from a home base and the idea is to, RTS-style, work your way across the map as a team slowly gaining ground on your opponent’s territory until it comes time to finally attack the head base. Characters level up and become more powerful as they kill enemies, and the fact that there is usually multiple routes through each level means that the more successful teams work together as a unit and implement some basic strategies.

These games might not be all that complex, but because they typically use a free-to-play model to ensure that people find online games easily, they also tend to be quite addictive.

Now that there is some competition to League of Legends out there, you might be wondering which MOBA game to try out first if you’re new to the genre. I’ve played three, and I’ll list my thoughts below on each. If you’ve got a recommendation of your own please let us know in the comments section: 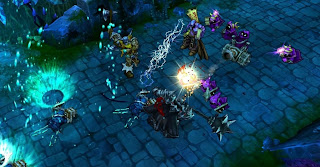 League of Legends: In all fairness, it’s going to be difficult to top this game. League of Legends has become the kind of game that attracts pro gamers for a reason – it is incredibly balanced and nuanced at the higher skill levels, and players (and teams) work hard at understanding the ideal synergies and constructions of their teams.

Characters have plenty of personality too (and there are masses of them to choose from), which helps attract newcomers in. That said, it would be remiss of me to suggest that this game is necessarily easy to get into now. There are certainly less friendly communities out there, but the League of Legends community don’t tend to tolerate fools and without a dedicated single player game, it’s very much a case of sink or swim. Once you get over that initial hurdle, however, you’ll find a competitive environment that isn’t matched by many for sheer depth and interest. 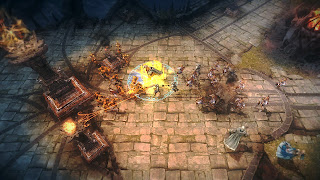 Guardians of Middle Earth: The first real attempt to bring MOBA gameplay to consoles, Guardians of Middle Earth does a reasonable job. It uses the Lord of the Rings license well and there are some great characters to play around with – everything from Sauron and Gollum to heroes that even the most committed fan of Tolkien will struggle to recognise.

The game also does a great job of mapping the MOBA-style gameplay to the relatively limited DualShock controller, and it balances things out well enough that you feel a sense of progression while never alienating new players.

All that said, Guardians of Middle Earth has a very small community comparative to other MOBA games, and I’ve struggled to ever get a game going which doesn’t feature AI opponents. The lack of replays and high-level competitive play also hurts the game overall, and I’m not sure how long a game like this can last without a strong community. 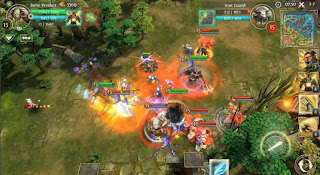 And, critically, it’s balanced badly. The most crucial, unforgivable mistake that Heroes of Order & Chaos makes is making a surprisingly large group of heroes useless in the face of a few more powerful individuals. Predictably, these heroes are the most expensive and at every turn Gameloft encourages you to spend real money to make the purchase of these heroes happen sooner.

There’s a general lack of energy in the levels, which are bland to a fault, and though the game saves replays and it’s relatively easy to find online matches, I can’t help but wait for a better developer to come up with something better for the iPad, because it would be a great platform for MOBAs.

So, MOBA fans, which is your favourite game in the genre?