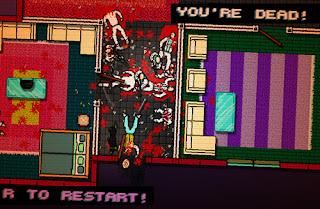 Hotline Miami surely is one of the most unique games of 2012. While 2D top-down action games are a dime-a-dozen, rarely are they neon-drenched, hyper-violent, and almost universally well-liked. Hotline Miami definitely has its place among the rest of 2012’s games, with few other contenders challenging to exceed or even match what the game offers. However, Hotline Miami will hopefully be matched in both style and substance by its sequel.

Earlier yesterday, Jonatan Söderström, the one-man developer of Hotline Miami, slyly announced on his Twitter feed that a sequel to Hotline Miami is in the works. Originally this sequel started as an extensive DLC pack, which would include new levels, new characters, and potentially a map editor, increasing the total game content to at least twofold. In a small interview with Eurogamer, Söderström mentions his logic for turning the planned DLC pack into a sequel; “Yeah, it seems like it will end up bigger (in terms of the number of levels we’ve got planned) than the first, so it feels reasonable to release it as a full game rather than a DLC.”

Fans of Hotline Miami will have to wait a while, however. In the same interview, Söderström clearly acknowledges that barley any work on the sequel has begun and working on patches for the original game is his priority. “We’ve barely begun working on [the sequel to Hotline Miami] though, still got things we need to patch with the first game, so that’s the main priority right now,” Söderström states.