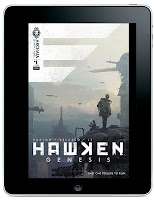 Want the chance to get in on giant mech game Hawken? Then you might want to pick up a digital copy of Hawken: Genesis on comiXology.

The digital comic book giant is giving away PC beta codes for Meteor Entertainment’s Hawken with every e-issue of Genesis that’s downloaded. The comic (the first of a four issue series) comes from Archaia Entertainment and will be totally free to read as a prequel series to a full length Hawken graphic novel that’s on the way for 2013. It’s written by Mass Effect and Star Wars’ Jeremy Barlow and features the pencils of the very talented Francisco Ruiz Velasco, who you may know from his work on Hellboy 2, The Hobbit, and Pacific Rim.

The HAWKEN: GENESIS full-length graphic novel arrives March 2013 and will be published by Archaia Entertainment. This hard-hitting OGN establishes and explores the exciting world of Illal, the backdrop for the HAWKEN video game universe. Developed alongside Khang Le (Project Offset, Flight), the game’s Creative Director and lead conceptual designer of Adhesive Games, and featuring the talent of some of the industry’s top conceptual artists, comic illustrators, and painters, HAWKEN: GENESIS is both a prequel and sourcebook to the epic warfare players will experience firsthand in the HAWKENvideo game. Readers will get an amazing look at the vast post-apocalyptic mythology behind HAWKENand follow the stories of the pivotal individuals that determine Illal’s fate!

So, the comic is free and it comes with a beta code for Hawken, which is also free. What’s not to like about that?

The first installment of Hawken: Genesis (with the beta code) is available now on comiXology’s digital reader platform. The code is good for the third closed beta of the game, which begins on November 20th and closes on December 6th. The full open beta of Hawken opens up not too long after that too- that’ll be on December 12th and will also be free to play (as will the final release). Hmmm, I’m sensing a theme here…

One thing that won’t be ‘free’ to read or play (not that you can play a book), will be the full Hawken: Genesis graphic novel. That hardcover beauty will go on sale in March of next year and features work from an all-star team of industry talent including (deep breath) Kody Chamberlain, Federico Dallocchio, Nathan Fox, Michael Gaydos, Bagus Hutomo, Sid Kotian, Khang Le, Christopher Moeller, Alex Sanchez, Bill Sienkiewicz, and Francisco Ruiz Velasco.