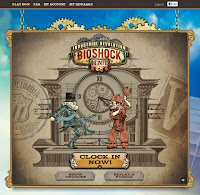 Want to play a little piece of Bioshock Infinite right now? All you need to do is pre-order the game.

Irrational Games announced today that a special online game called Bioshock Infinite: Industrial Revolution will be a free bonus for anyone who pre-orders the game from select retailers.

The puzzle game, which comes from Lazy 8 Studios and not Irrational itself, casts the player as a factory worker on the floating city of Columbia. Your mission (should you choose to accept it) is to solve a series of increasingly difficult puzzles in order to keep the machinery of the burg operational.

And this all ain’t just for the fun of it either, because as you play you’ll be unlocking in game rewards and picking up a fair bit about the game’s complex backstory. If that backstory turns out to be anywhere near as amazing as (the Rapture set) Bioshock’s, then I’m wagering you’re going to want to see as much  of it as possible- I know I will.

Sound like some interesting stuff? Click right on over to Irrational’s page about Industrial Revolution here to learn more.