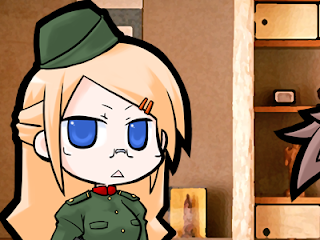 Chances are, you’ve taken part in a video game war of some sort. It could have been simulated through the tactical affairs of Advance Wars, the more accessible Call of Duty, or even the historical action in Dynasty Warriors. Regardless, video games about human conflict seem to be here to stay. How about a game that focuses on the conflicts of human tanks, then?
Aside from having an amusing title, War of the Human Tanks is a text-heavy adventure that takes a comical stance on the violent acts we commit whilst still sending some appropriately dark (if slightly generic) messages.
Oh right, you’re probably still wondering what a “human tank” is. In addition to one’s firepower and combat skills, each packs personality, emotions, and intellect. Apart from their robotic nature, they’re disturbingly similar to humans. The story makes a point of explaining that they lack human rights, despite their vaguely organic physiques. Other than this reoccurring plot point, the tale is reasonably satirical. Even though some generic anime spots are used on occasion, you can expect the story to provide a compelling reason to press onward.
And it had better, since you’re dealing with quite a helping of text to read. We’re talking half an hour or more at some points – get out the reading glasses. As a result, the experience is somewhat akin to a visual novel in that if you’re not a fan of reading, you could be ripping your hair out rather quickly. 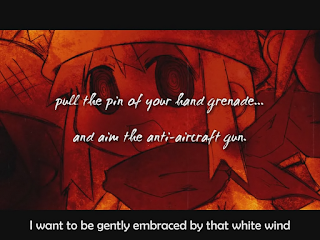 When it finally appears, the “game” portion itself is a real-time affair that borrows elements from basic strategy games such as Fire Emblem and Mecho Wars. You’ll take control of various types of tanks that each have their own statistics, advantages, and weaknesses. The goal of any particular map may vary, but the gist is that you must compete against enemy human tanks to clear the map. One of the early chapters has you routing all the enemy units, for example.
All the traditional fund handling and pre-battle upgrading are here as well. What distinguishes War of the Human Tanks from the games mentioned earlier is its real-time element. The game has a constantly ticking clock with events that get triggered on occasion. There are no “turns” either, but a specific amount of time that it takes for your tank to be operational again.
Another key distinction is that enemies are always hidden by the fog of war so that you’re never quite sure what unit will pop out from where and ambush you. You’ll spend most of your turns doing recon duty and carefully planning your movements on the grid to avoid spontaneous conflicts. Some will find this slightly irritating at times, since it makes the game feel less tactic-oriented and more like detective work. Nonetheless, there’s enough skill involved that the battles come off as gratifying rather than petty excuses to progress the story. 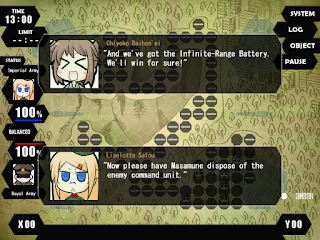 Also setting War of the Human Tanks apart is the artwork. Characters are depicted in a minimalist chibi style that certainly isn’t commonplace in the genre. With that said, the game’s doujin roots are decidedly evident. Actual animation (movement of menu items or the world map itself) has been used sparingly, saved purely for moments that necessitate it. Furthermore, the pseudo-realistic backgrounds used during dialog sequences tend to clash awkwardly with the otherwise cute characters. You’ll even catch characters having their expressions out of sync with the box portraits. It may seem like a harsh critique considering the nuisance of budgets, but some extra polish would have gone a long way toward making the game cohesive and consistent.
War of the Human Tanks seems to be aimed squarely at a certain niche. It has little in the way of flaws, but the production values and storyline will simply not appeal to the majority of players. Still, it’s absolutely a worthy title in its own right. The character banter is thoroughly entertaining, augmented by solid combat. If you can brace yourself to be a casualty of a $9.99 USD price tag, you may well escape with a sleeper hit instead.
-Clark A