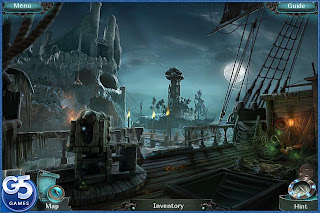 It is an odd quirk that so many hidden object games seem to come from a horror background. This genre allows for a lot of fun for developers to build themed settings in which to hide those pesky objects.

Halloween with all its ghost stories, haunted houses, dark cemeteries and all manner of creatures and monsters provide an apt muse for the art-designers. However, it is a risk – with a relative over-saturation of the market, making a game that is noteworthy or special and becomes a difficult task. Thankfully, the games developers have achieved just that with Nightmares from the Deep, the Cursed Heart.

Nightmares starts off with an excellent cut scene and tutorial that demonstrate the setting beautifully – you are a museum curator who has come across the remains of a Captain Remmington – a feared pirate who has paid the ultimate price in his bid for immortality. His soul has remained whilst his body has gone – this is a ghost story. And so the evil Captain, revived when you, the player, combined his sacred artifacts, steals your daughter with nefarious plans. 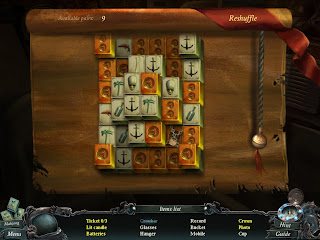 It is then your job to pursue said ghost pirate and retrieve your daughter. The adventure is immersive, and takes the player through a number of different environments (seven levels including a ghost ship, a Caribbean island named Skull Island and a lighthouse) that are all excellently drawn and brilliantly rendered in ‘HD’ on that iPad’s gorgeous screen.

A major talking point in hidden object is the artwork and the interaction with it. If the game looks poor, or the player cannot properly interact with the objects in it, they will be very quickly frustrated. Thankfully, the basics work as expected of the genre – Nightmares features excellent visuals combined with an uncluttered and accessible interface.

The difficulty level is well paced. Follow an easy tutorial, players are set loose in the virtual world and the game never feels far from achievable. No surprise for a hidden object game, naturally, but for players who do get stuck there is also a hint button. As a result the pace of gameplay is fantastic. Like an intricate spider’s web, the challenge of how to rescue your daughter eventually comes together nicely, sandwiched between beautifully drawn images upon which to rifle through and multiple fun mini-games to provide the occasional change of pace. A testament to the excellent story-telling and design is that fact that all the levels combine to provide the big picture – its intricacy if fantastic. It is, plainly, fun. 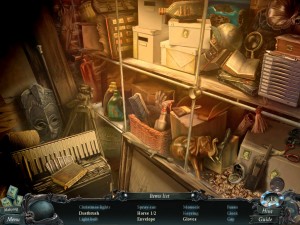 Replayability is never high with puzzle/hidden object games. Nightmares attempts to rectify this issue through the addition of achievements. It is however lamentably barren, a paltry list of rather easily achieved objectives that can reasonably completed by the end of the second play through. This is a minor complaint, but a little more effort in randomising some of the game elements would not have gone amiss.

So, who will this appeal to? Nightmares will be fun for the casual gamer (there are a lot of you out there), as well as providing an excellent title to dedicated hidden object fan. It is a very enjoyable title, one of the best in its genre and thus will appeal to general puzzle fans. Essentially it will be good for anyone occasionally likes to engage their brains in a leisurely way.

Pre-order Train Simulator 2013, get a discount