Konami announced today that a free version of their Frogger Pinball Frenzy is now available for download onto iOS devices with Frogger Frenzy Free.

Frogger loving holdouts rejoice, as you can now get your froggy pinball on for nothing. And in addition to the chunk of the game that you can play in Frenzy Free, users can also link up their Facebook accounts to compete with friends and access achievements and power-ups on both iOS and Facebook.

In Frogger Frenzy Free, fans can defeat new and old enemies to rescue Lily and save Frogger’s home from the evil clutches of RoboCroc.  It’s pinball with a twist as Frogger curls up into a ball and rolls, flips and leaps his way to victory. Gamers can play on incredibly detailed pinball tables with 3D rendered graphics, ramps and realistic physics.  Players can also use flippers to shoot the ball up ramps, hit targets and unlock special modes including BOSS BATTLES, FROGGER FRENZY and MULTIBALL. Featuring three action-packed tables including the Swamp, City and Space Station, gamers participate in tournaments to show the world who is the ultimate pinball master.  Special power-ups and bonuses are available by leveling up, hitting the targets and completing loops. 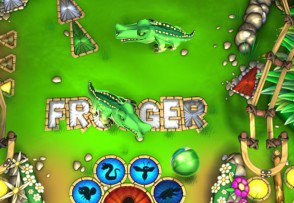 You can grab the universal App for yourself right here.