Whenever I walk into a store with some expensive items, I’m always afraid that I’ll knock everything over with my broad shoulders. Luckily, I’m able to exert all my shopping destructive desires in Bullistic Unleashed (dude, you’ve got problems – ed).

Think of Bullistic Unleased as a mix between Angry Birds and Pain. Each level, set in the mall, sets the mission of smashing, breaking, injuring and exploding everything inside. And I mean everything. At the end of each level you’re given a percentage of your destruction within the level. Get past a certain amount and you unlock the next level.

The gameplay works like you would expect. Flick from the catapult and watch the chaos unfold. After your flick, you lose pretty much all control of your bull. However it can be launched, blown up and travel in elevators after it has been set off. There is something really comical about smashing stuff, then waiting a few minutes while your bull rides to the next level. 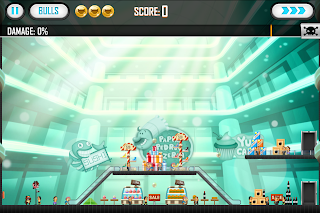 If you’re a perfectionist you will love this game. You will most likely also hate this game. The magic is that the levels don’t seem frustrating. You know you’re at fault when you fail in the levels. It worse when you know you have made a bad shot, but you just hope your bull will keep momentum as it slowly rolls to a barrel cannon. Every level has items spread far and wide, so you will need to practice if you want to get complete a level. Every level contains three coins and these coins are used to unlock extra bulls.

These bulls bring with them extra abilities. Think the non-red birds from Angry Birds. Flamma Bull to make him do a vertical dive sending him to crash into anything that blocks his path. The Chicago Bull can throw a basketball and leave it to travel along its merry way. 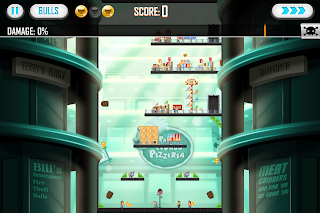 The presentation is something special. Although you can see the game’s influences loud and clear, the corny shopping centre music to the way the bulls will punch shoppers in the face if they walk past them is just nice. It gives you a laugh. The game developers know what the game is. It isn’t some high-score competition game, but it’s fun, something that is real hard to find in handheld games these days.

When I first started playing this, I thought it would simply be another Angry Birds clone. But it’s originality and humour is simply outstanding. You won’t be finished with this game for a few sessions, but hopefully there will be some extra levels in the future. The bottom line is that you will have a good time with this, whether it comes through inflicting pain onto others or fulfilling the deep-grounded urge of destruction.

Get in the game with 007 Legends