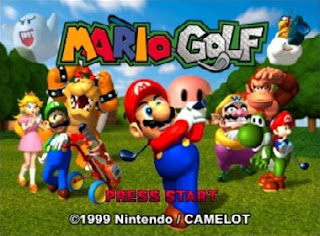 Mario is quite the athlete. He goes kart racing, plays tennis, and has even gone to the Olympics. The quality of his adaptations varies depending on the game, but at least Mario Golf is one of the very best.

If you’ve played any cartoony golf game in the past few years, the control scheme should be relatively familiar. Making shots is done by stopping a bar with good timing to select your desired distance, then quickly pressing the button again to determine your accuracy. Once the sum of your drives has landed you at the putting green, you’ll aim for the hole an attempt to achieve a low score.

As you might have guessed, this can be quite a bit more complicated than it sounds. You need to take into account the wind, possible rain, and the type of area from which you’re hitting the ball. Landing in a bunker or in the rough will make it difficult to recover, whereas staying on the straight and narrow (the fairway) will ensure the ball remains easy to send soaring. Putting is equally complex, needing you to take into account the “flow” of the green and the bumps along the way.
In terms of content, there’s quite a bit to do. You’ve got the standard amount of 18-hole courses, a time attack mode, training, character matches, tournament mode, and ring shot golf. Those are all fairly self-explanatory, but the most voluminous and addition of the bunch is the mini-golf mode. 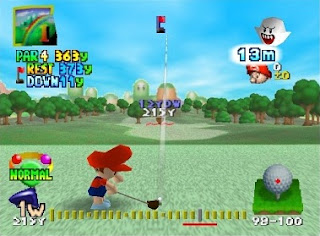 Like in real life, the game takes place within a confined space and you need to make use of the golf ball’s ability to ricochet off walls in the enclosed areas. The controls are also simplified from the regular game of golf, requiring you only to select your power and direction. In my opinion, this mode alone warrants the price of the game – it’s quite easy to spend unhealthy amounts of time here with friends.
Additionally, the game uses a points system that determines what courses you unlock, as well as a myriad of characters to make playable through the character match mode. On the other hand, some would argue that too much needs to be unlocked. At the beginning of the game, you can only select one of four characters…none of which includes the titular plumber himself. Thankfully, there’s a cheat code to unlock them all in one fell swoop should you be lazy want to have all characters available for a party with friends.
Speaking of friends, most of the modes can be played with multiple people (locally, of course). The multiplayer aspect truly adds something to this one, even if it can be difficult to round up enough pals these days. Mini-golf is an absolute blast since it can be done much faster and requires less skill than the main mode.
It does bear mentioning that there isn’t anything definitively “Mario” about the game. Very few courses draw from the franchise’s rich history for inspiration and even the character roster has plenty of generic human faces. Still, this also allows the game to shine as a more authentic simulation than some of Mario’s recent over-the-top outings. Just think of it as “Golf: Featuring Mario and Friends” and don’t expect to see any game-breaking gimmicks. 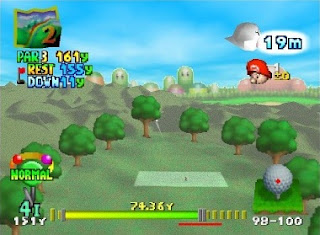 For a game from the early 3D console era (a period notorious for poorly aged visuals), Mario Golf holds up surprisingly well. The frame rate is still very solid. The courses are full of life and the characters, while evidently blockier than the modern day Mario Kart 7 or what have you, are still very charming. The level of jaggies in the 3D character models varies upon an individual basis, but someone like Yoshi almost looks as if he never aged at all.
The soundtrack is still very pleasant as well. There doesn’t seem to be a whole lot in the way of volume, but the cute, family-friendly vibe is captured well.
Mario Golf serves up simple, wholesome entertainment for one player or many. Though outmatched by its digitally unreleased sequel, this is still a very good value in its own right. In fact, it may well be worth nabbing even if the sport does nothing for you.
-Clark A