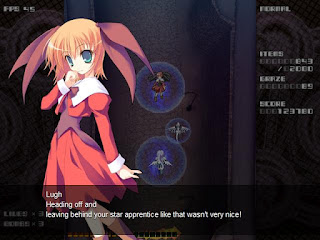 Bullet-hell shooters aren’t exactly huge outside of Japan. It’s tough to find a decent selection on most console download services, let alone ones in English. With that in mind, it’s good news that Nyu Media has bundled three of the finest games in the genre together and even translated two of them.

Each game has its own unique plot, but the first two revolve around a group know as the “Gun Bullet Children” committing vampire genocide. The third game has you entering a tournament in an attempt to become the ruler of the world of Pandemonium.
The game doesn’t do a terribly admirable job of easing you into the story, as you’ll probably need to do a little research to figure out what’s going on at first, but that’s not really the point of these games anyway.
Once you’ve picked your game and character, you’ll be taken straight into battles against various foes. The said adversaries will then spout a combination of weaponry and orbs your way while you hold down the fire button and shoot them into next Sunday. Should you touch the orbs, they will build up your gauge and enable a devastating attack once full. There are also some character-specific special attacks and character exclusive mechanics, such as Ria’s polarity system. 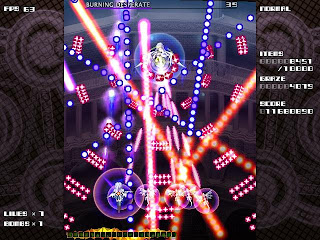 You can’t afford to flail around shooting aimlessly, though. The enjoyment and finesse of the genre comes from finding that exact space to hide in when the rest of the screen is bathed in bullets and missiles. You need to use subtle taps of the movement buttons to position yourself perfectly whilst still moving around to ensure your fire makes contact with the enemy. The games can be lenient about your proximity to bullets at times, which is quite helpful considering the characters are a lot more organic in shape than the basic spaceships seen in some shoot ‘em ups.

Arcade mode and story mode play out in much the same fashion. If you lose all your lives and/or credits, it’s back to the beginning for you. Like any good arcade game, regardless of how far you made it, you’ll feel compelled to try again for a high score (granted, just staying alive is more of a task than getting points). Each of the three games is short enough that you can count the levels with both hands, but given that these are arcade-like experiences, you’re probably going to end up replaying them a fair bit.

The mechanics differ from game to game, but for the most part, it’s the same formula with a similar level of polish. The real gem of the three is Jade Penetration Black Package. Aside from having one of the most awkward-sounding game names in recent memory, it’s also one of the best bullet-hell games period. The first two titles are good fun in their own rights, but Jade Penetration introduces worthwhile mechanics and boasts the best soundtrack of the three.

As with nearly any bullet hell game ever, it goes without saying that this package is not a genre for the faint of heart. If you’ve got slow reflexes or find yourself cussing as difficulty increases, you’d best keep your distance. There’s a chance someone new to the games might be able to pick them up, but it will take some practice. The mechanics themselves are easy enough to understand, at least. You’ll also want to invest in a game controller if you haven’t done so already, since making subtle movements is a lot easier on the wrist than prodding at the arrow keys.

It does bear mentioning that the English translation only applies to the second and third games, while the first is treated as an import title. It’s still a good value for the money, as you’re getting three games for $9.99 USD. Lack of familiarity with the Japanese language shouldn’t impact your enjoyment of the first game at all. 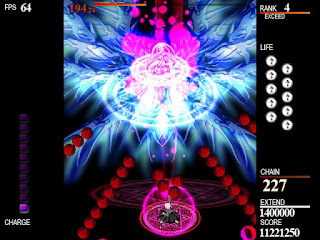 The in-game music can be upbeat, but thankfully never too distracting for the task at hand. While the latter two games feature localized text, the characters are fully voiced in Japanese (probably for the best anyway, considering the fan consensus on the quality of English dubs). It’s worth noting that the cast features some known actors, such as the voice of Wrath from Full Metal Alchemist.
The visuals are well-done, for the most part. The character and enemy designs in particular manage to feel distinguished. The first game does have a bit of a niggle, though. Whether or not by design, it can be somewhat difficult to discern the gauge building orbs from the artillery due to the fact that they share the exact same hue of red.
The worst thing you can really say about the eXceed Collection is that it might only appeal to a certain niche. If you can overlook the level of accessibility, you’ll find some of the very best games in the genre – translated, no less.
-Clark A