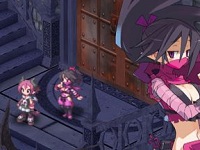 Oh wow do I hate Disgaea 3. It’s like a disease it crawls under the skin, tearing apart the organs and laughing off any attempt to shake it away. It’ll hold you prisoner at home, unable to come out as you grapple with it, trying to fight it off, but inevitably giving in and letting it dominate your life. Note: I don’t hate Disgaea 3 at all, I actually adore it, it’s just painfully, wonderfully addictive.

As an example, take the theme song that plays while you’re in the central game hub that houses the shops and other services that you’ll be using to carefully construct the dream team of warriors and monsters (more on that later). That innocent (for most games, anyway) theme song is weird, wonderful and catchy. Since starting to play this game I’ve been playing that song in my head over and over and over again. It’s almost brutal. 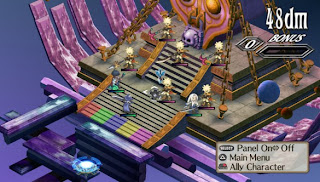 Of course the rest of the presentation suits, demonstrating a consistency to theme and attention to detail that is rare to find in game productions of any size. The whole game has an appealing Tim Burton-style theme to it. The kind of demented personality that drives The Nightmare Before Christmas to make it one of the real classic animated movies is much the same character that runs through Disgaea 3. It takes a very dark theme (demons and the evil things demons do) and turns it into a free-for-all comedy fest with a cute art style and some amazingly witty dialogue. Not a second of this game isn’t a pleasure to experience and the fact it sits front of mind, even when not playing it, until it becomes genuinely annoying is simply a reflection on how overbearingly charming the game is.

All of that carefully constructed setup would be for nought if the game itself didn’t back the premise up. Luckily it does. Now, I could try and explain my way through the myriad of complex systems that make this one of the most complex tactics strategy games that you’ll ever play, but that would be doing the game a disservice, since it would likely just intimidate anyone who hasn’t played a Disgaea game before. In effect the game does a good job of balancing the flow of information to players, so much so that even strategy newcomers can jump in and have a good time, it’s just that by the end of the game’s substantial play time there is a lot of information that has flowed on to players. Without even realising it, those strategy newcomers are going to become real veterans by the time they get through this game. The likes of Final Fantasy Tactics, Fire Emblem and Tactics Ogre have nothing on the depth of mechanics displayed in Disgaea games, and though Disgaea 3 does at times fall into the same trap as the previous games and become a bit grind heavy, it’s always a compelling experience thanks to that presentation. 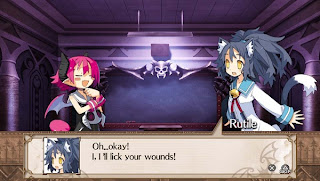 For the veterans of the series, expect this Vita version to be the definitive version in many ways. It retains all the monster crafting, item balancing, tile-painting mechanics we’ve come to love in this series with a handful of Vita-specific bonuses. It uses the GPS and Near in a handy way for extra in game rewards, and for the people who are patient enough to get a feel for it, the back touch screen (which I personally preferred turned off) allows for additional camera manipulation.

The game’s story mode itself is reasonably easy to get through, with the real challenge being reserved for the game’s alternative (and mostly optional) world. There you’ll need for your characters to be approaching the level cap of 9999 (I kid you not), and further tweaking to get the most out of that that side of the game. And there’s a lot that can be done in terms of skills, statistics and equipment to tweak and customise an ultimate team, so it’s a bit of a pity that there isn’t a vs. multiplayer mode to really let people let loose and show off their careful constructions. 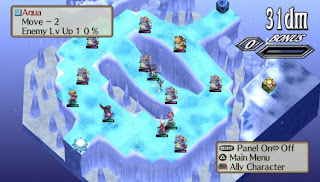 Possibly the best strategic feature is one that is borrowed a little from Fire Emblem – in combat units with a close relationship will team up to take on an enemy. The closer the units are the more likely they are to join in an attack on a monster when they stand nearby, and that’s how the real damage is done to enemies in this game. Therefore it’s important to cultivate the right relationships between units so they operate at maximum effectiveness on the battlefield.

Let it get into your skin, and Disgaea can literally, without the slightest bit of exaggeration, last for hundreds of hours. It’s challenging, entertaining and charming. While the Vita hasn’t got many big name JRPGs on the way just yet, this is a fine start and should tide most people over while we wait for the next big thing to hit. Even people who have played Disgaea before might want to give this game another go on the Vita because as a handheld game it offers near limitless replay value.