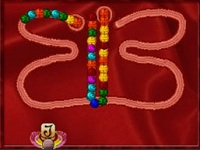 It’s fair to say that there’s certainly no shortage of Match 3 puzzle games on the DSiWare. From “A Little Bit of… Puzzle League” to “Bejeweled Twist”, the system’s Puzzle library has become somewhat over-saturated. Yet despite all of this, we haven’t seen many match 3 line shooters in the same vein as Luxor or Puzz Loop. This is where Teyon’s Crystal Caverns of Amon-Ra fills the gap in the market and while it’s a passable attempt, its just not that interesting.

The game allows you to choose between 3 different gameplay modes. The main attraction on offer here is “Level mode”, which naturally progresses through the stages in order. Then there’s “Choose game”, which allows you to choose which world you wish to play and finally, “Random Game”, which as you might expect, randomly throws you into a stage from any of the 10 worlds.

As said before, the game plays very similarly to titles such as Luxor and Zuma. Like Luxor and Zuma, a group of differently coloured crystals move through a path, proceeding from one side to the other. If they reach the end of the other side, it’s game over for you so you have to shoot similarly coloured crystals into the group from your shooter at the bottom of the screen. 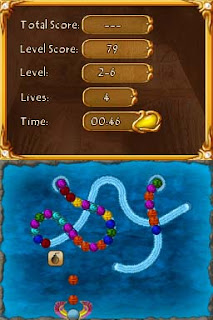 If you create a row of three similarly coloured crystals, they are destroyed. This will also serve to slow down the progression of the balls, as the front end won’t start moving again until the gap created by destroying the crystals is filled by the other half of the group. A variety of powerups appear to help you, such as a laser pointer and bombs. Both quite useful, although you also get “Power Downs” as well like “Fast Forwards”, which make the group of crystals move faster than normal so you have to be careful.

The game is good in short bursts and can be quite fun at times but unfortunately, it’s rather dull and lacks the addictive nature of its more famous counterparts. While there’s over 1000 different levels available to play through, they don’t present too much of a challenge and interest begins to fade quickly. Scores are saved to local leaderboards but whether you have the personal drive to try and get the best high scores for each level is another matter.

Crystal Caverns can be played using two different control schemes, through the use of buttons and the touch screen. With buttons, you simply move the shooter using the D-Pad and press A to shoot, whereas the touch screens simply requires you to drag the stylus across the screen, taking the shooter with you and lifting it up will then release a crystal. Stylus mode definitely makes playing a lot more fun, as it feels more precise and better suited to the system than buttons.

Looking at the game’s audio, there’s not much to say here. It’s repetitive and completely forgettable but it’s bearable and won’t grate you too much. Visually the game is just very bland, featuring some rather dull backgrounds which do little to stimulate you and only serves to make the game feel even more dull.

Overall, Crystal Caverns of Amon-Ra is not a bad game but it’s not a particularly good one either. While there is a lot of levels on offer here for 500 points, the game still feels rather bare bones and will struggle to hold your interest for long. Either way, for those of you looking for a Zuma styled fix on your DSi, you could do worse than this.

Pandora’s Tower: A special mention for a special retail game