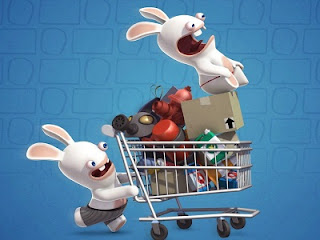 Not so much an game this one, but Ubisoft’s Rabbids have invaded just about everywhere else, so why not Digitally Downloaded? Rabbids Go HD is a cute little app for fans of the bunny lunacy.

For starters, it’s a good app for keeping up to date with everything the Rabbids are doing. There’s an easy link to the Facebook page, and the “Rabbid’s World” part of the app contains plenty of the multimedia that Ubisoft has generated for their various antics: photos, wallpapers, comics and videos, all just a tap away.

As you’d expect from a Rabbids production, everything has a very bright, highly energetic presentation and there’s a lot of very juvenile humour to find throughout the app. It all scales up nicely for the iPad’s HD screen, and there really is a whole lot of content to wade through here.

The other half of the app is the bit that you could call a “game.” It’s not really – it’s more a dress up room for you to make your own personal Rabbid do stupid things, but it’s interactive and it’s fun enough for a few minutes. 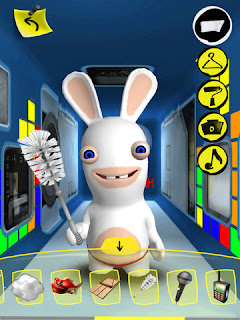 In practice what you do is set up a virtual room and then select some actions for the Rabbid from a menu. The “game,” such that it is, is in discovering the 35 different “moves” that the Rabbid can do, generally by pinching tapping and otherwise annoying him.

It’s a little depressing, given how limited this app is that it’s also microtransaction supported. Shelling out a bit of extra cash earns extra crazy costumes to dress the Rabbid up in, and I’m guessing that the really hardcore Rabbid fans will get a kick out of that. I don’t entirely understand it, but Ubisoft has earned itself a big following of Rabbid fans, and I suspect the younger generations will be sneakily using their parent’s credit cards for in-app purchases.

I’m a little disappointed that there still isn’t a “real” Rabbids game on the iPad. They’ve provided me plenty of minigame fun in the past, and done well, minigames go down a treat on the iPad. But for Rabbid fans this is a safe download. I won’t give it a rating as it’s not really a game, but enjoy!