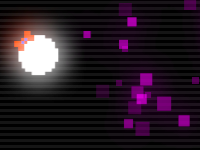 Pac-Man can never die. Ever.

But he can mutate, and now he’s (she rather) surrounded by all those high energy radiation signatures coming out of the Large Hadron Collider so things are going to get mixed up a bit.

The basics of the game are to collect shinies in the search for the Higgs Boson, because shinies, uh, make higher Teravolt collisions happen and… Sciencey sounding nonsense gamespeak aside, you push Ms. Particle around the screen in Pacman freestyle in order to collect ‘dem glowy cyan pellets and move to the next round. Various level modifiers are in play such as gravity, death rays and other genre staples. Pointless yes, but wasn’t Pacman and all those enjoyable goodies that we call videogames also pointless?

Well, problem here is that the game commits suicide by derping together unresponsive controls and a difficulty curve steeper than Super Meat Boy and N combined. So this is not only pointless, but also unenjoyable. 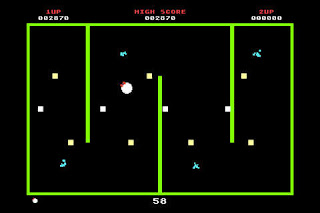 I’m going to hone in on some problems here and tear them apart gratuitously.

I understand the retro aesthetic and all. Hell, I love it. But there are some things that needed to have moved on. The notion of highscores being the most important feature in a videogame faded somewhere around 1998. There is no incentive to keep playing here. Even then, in this case chasing high scores not fun as it is rage-inducingly borderline unplayable and so I just don’t care. This game could have taken a lesson from HookWorld and Mage Gauntlet in keeping a retro appearance and a modern incentive to keep gaming. The two better games above (currently getting almost two solid years of gameplay from me) offer things that keep me going. Achievements. And hats. And how easy would that be to implement developer!?

This, in short, is an arcade game that should have been brought out in the early Nineties, and it should have died there. Some people might get a kick out of it, but it wasn’t a game for me.

I can’t say any more, because this game has no substance to speak of whatsoever and there’s nothing left to tell. Better time is spent on the App Store my friends.