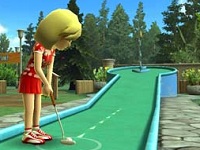 The word “fun” in a game headline is a sure-fire sign of shovelware; only marginally less offensive than replacing an “s” with a “z.” But, thankfully, Fun! Fun! Minigolf Touch is not shovelware. It’s not brilliant by any means, but it is indeed fun.

It’s the cheapest eShop 3D downloadable title to date, and this does mean there’s a lack of real content; there’s only a handful of courses spread across three themes; America, Asia and Europe, though there’s little to tell these themes apart from one another as the backgrounds are pretty sterile. There’s also a “trick shot” mode, which involves trying to putt your golf ball to collect coins, rather than aim for the hole.

The reason you’ll be collecting coins is to unlock more courses and trick shots, and indeed, almost everything in this game is locked away in the shop, requiring you to use the virtual currency you have to work pretty hard to collect. Because some of the content can be quite pricy, there’s even some grinding involved to earn enough to unlock some of it, which leads me to suspect that the currency is in there to pad out a very brief game. 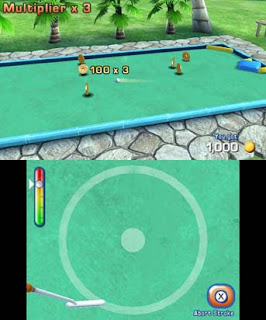 But what there is is good quality. Though sterile, the backgrounds look nice in 3D, and the ability to bring your Mii along for the ride is a nice bonus. There’s not enough games that make use of the Miis. The courses are well designed, though perhaps not as crazy as I might have liked for minigolf. There’s a few too many plain, flat greens, and not enough clown faces (Happy Gilmore reference there, folks). The putting itself works nicely, with both touch controls and button presses comfortable and natural, and the only criticism I would have with the actual gameplay is that it can be a little hard to tell where the ball is going to bounce when you’re aiming up a shot off the wall. This is due to a camera that is a little too fixated on being behind the character to allow for easy assessments on angles off the walls.

That said, at least with practice it gives pulling off a course of perfect holes in one a real sense of achievement. Because there are relatively few holes (81, and they fly by) the difficulty spikes between the “Easy,” “Normal” and “Hard” courses are significant. Perfectionists are going to get more out of this game than casual players for that reason.

One interesting quirk in the gameplay is the fact that the ball is considered “out of bounds” unless it stops within a few feet of the hole. Even if it’s still on the course, unless it comes to a rest within a white circle area around the flag, you’ll need to put from the tee again. It means you can’t play safe and inch the ball towards the hole for a par; this is much more of an “all or nothing” game, and that helps give it a nice, casual, arcade feel to the game.

And in every other area, this is a completely inoffensive game. It’s not especially memorable, and it’s not something that will keep you playing for months on end, but it’s certainly more interesting and better designed than Gameloft’s appalling Let’s Golf 3D, and overall this is a safe way to spend an afternoon and a couple of dollars.