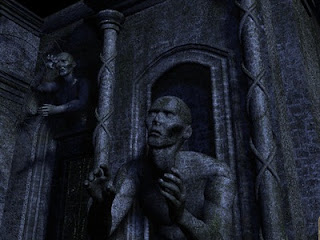 Dracula needs no introduction to most people. Created in 1897 by Bram Stoker, the character became famous worldwide, successfully redefining the Vampire genre and became the inspiration for countless additional works of fiction. So it’s no surprise then to see that one such work was Microid’s game adaptation of Dracula is amongst them. Originally released back in 2000, Microids have decided to re-release this point and click adventure game once more onto iDevices everywhere and while it’s not a particularly memorable title, it is still a fairly decent adventure.

In the main game, you play as the famous Jonathan Harker. After saving his fiancée from the Count Dracula in the previous instalment, we follow Jonathan as he returns to London. Problem is though, the Count as followed him there and he’s out for revenge after being defeated the first time around in Transylvania. It’s not particularly faithful to Bram Stoker’s novel but it’s still an interesting take on the story. 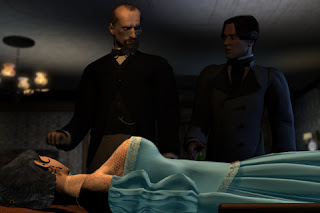 The gameplay itself takes place from a 1st person viewpoint and you can rotate the game by 360° using your fingers. Your aim is to explore the deserted country house of Carfax and find the necessary tools to move onto the next area. You move across the environment by tapping on the silver arrows across the screen and item icons are symbolised by little circles. Tapping on them will to take you to a certain screen, which allows you to find certain items such as Nails or Crowbars, which can be accessed for use at any time on the main menu. All of this controls fairly well on the platform, with the game being fairly well adapted from the PC.

You’ll often be required to fight enemies as well, such as Werewolves. The battle system though takes awhile to get used to as you can’t simply pull your gun on them and shoot, you’re required to do things such as place mirrors in strategic places which won’t come to mind for most players straight away, nor do you have a great deal of time to take them out so you have to be quick. 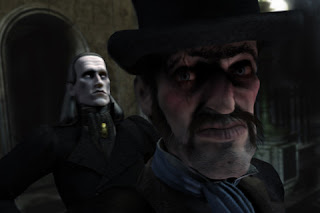 It’s not particularly scary for a horror based title but the game can be quite fun at times once you get into it further and exploring presents its own thrills. However, it can get particularly confusing at times however and you end up struggling to maintain much interest. Your objectives are not always made clear in the game either and it’s all too easy to end up aimlessly wandering across the environment, which is never good.

Video quality is not that great and comes across at a rather low-resolution, particularly in the introduction video and the title does show it’s age in the graphics department, although it’s not exactly a bad looking title. The soundtrack also does a nice job complimenting the game, as it gets quite moody and atmosphere but suffers from repetitive sound effects at times, such as hearing the same door creaking every few seconds that can become rather annoying.

Overall, the game doesn’t give off the best first impressions. While it’s not a particularly interesting title and can be confusing at times, those of you willing to dig deeper will find a game that offers a fairly enjoyable experience and one that’s translated rather well to the iOS, although it won’t be to everyone’s tastes.