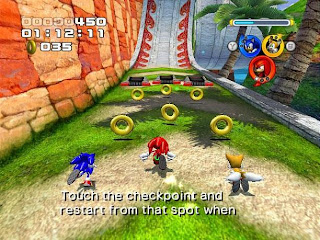 So much for “sonic boom”. Sonic Heroes has just landed on the European PlayStation Store to absolutely no fanfare.
Originally released on Xbox, PlayStation 2, and GameCube back in 2003, Sonic Heroes met with ho-hum critical reception. Some fans still consider it to be one of the better 3D games and true to the classic formula while others cite it as the “fall of Sonic”. The unfortunate part is that the PS2 port is cited the worst of the three with regards to glitches and performance, but it’s still a relatively playable adventure compared to some of Sonic’s other outings.
The strange thing is that this release comes entirely out of left field. No announcement was made by Sega of Europe and the game was not included with the regular PSN update schedule. One would expect more promotion, considering the company’s track record of hyping up Sonic re-releases for months.
Sonic Heroes will run you £7.99/€9.99 and about 4.5GB of memory on your harddrive, making it one of the heftier PlayStation 2 games on PSN so far. There’s no word on a release on a non-European release yet, but  expect it to randomly appear as well.
Perhaps it just cropped up because it’s PlayStation 2 Classics week at Digitally Downloaded?
Share this