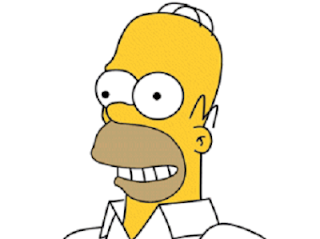 The Simpsons classic arcade experience returns with an Xbox Live edition that keeps the original ROM intact and adds in a few little extras- but is that enough?

If you were in an arcade (or pizza joint) in the early ’90s, then you know what cabinets you were looking for. There were a select few games that flat out required you to drop, at the very least, a handful of coins on.

For me, any combo of X-Men, TMNT,  WWE (then WWF), Avengers, Ghostbusters, and The Simpsons equaled gaming bliss for the afternoon… or at least until the quarter dollars ran out. Now publisher Konami has brought the classic game based on the family that invented the word ‘disfunction’ to the small screen (that, depending on the size of your TV, might be a completely inaccurate statement). How’s it fare? Uh… okay…

Good news: the fun is intact. The game plays exactly as remember it, which is to say that it’s got a set of pretty flawless button mashing controls. The Simpsons isn’t an exercise in subtlety and combo-ic grace (woo-hoo! I made up a term!), you basically just bash the buttons till you win.

You’ve got jump, attack, and some team-up moves should you be playing with a pal. That’s something I recommend by the way, playing co-op. It’s much more fun to smash your way through Springfield with someone else than alone, and that’s basically because a rich story experience this isn’t- it’s an arcade game. Hence the title.

As far as the graphics and sound go, this is an arcade game too. There have been no enhancements to the original game that graced the greasy (and at the time, smoky) halls of you fave hangout all those years ago. Since the game is sprite based though, it still has a nice hand-drawn look that works really well considering the source material.

It’s colorful and bright and the stages (8 of ’em) will all be instantly recognizable for fans of the amazingly long running TV show. Sound is okay as well, it works well enough but does feel really dated. One thing that surprised/disappointed me was that one of the main villains of the game, Smithers (no, it doesn’t make any sense) is clearly not voiced by the actual voice actor from the show. 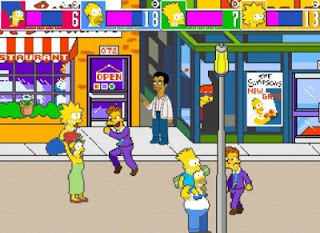 In fact, I don’t think any of the characters, other than the named family themselves, have their ‘actual’ voices. Not that there are all that many voices in the game, but it bummed me out all the same and makes me think I was wearing a pair of rose colored headphones back in ’92.

As far as extra goodies goes, there are some little additions. First and foremost is the presence of the ‘Japanese’ version of the game. Now don’t worry, because the whole thing is in English, but the Asian edition of The Simpsons, unlocked when you finish the main game, actually does make a few changes to the western version.

There isn’t anything Earth-shattering, but it’s a little easier, there are added items for use, a different point system, etc… As I said, nothing Earth-shattering and I barely noticed any meaningful difference as I played. Other neat inclusions are a survival mode and a character viewer that actually tells you where, within the game, you can find all the cameo appearances. Cool stuff.

If you liked The Simpsons in the arcades (and I think that would go for everybody alive and old enough to operate a machine at the time) then you’ll like this. It’s a classic and is deserving of a play through for not only quarter-muncher fans, but for all those who are too young to have experienced the days of the upright cabinet.

Sure a few more bells and whistles would have been nice, and I’d absolutely love to see an HD remake,  but The Simpsons Arcade Game is an extremely solid trip down memory lane. Now that this one’s in the bag, the trinity is complete (with X-Men and TMNT already available)… maybe we can move on to lesser known ROM’s at this point?

Maybe Ghostbusters? Oh come on! …Didn’t anybody like that one but me?

Call of Cthulhu: Wasted Lands is updated, fixes the issues you may have had

Good news for Sony in Australia