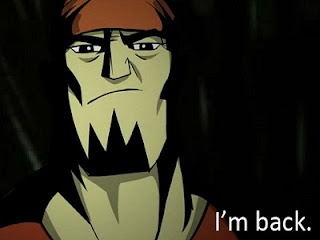 EA’s Shank returns to go toe to toe with a crooked South American regime in a bloody slice’em up fight through the jungle. Does the sequel manage to carve out a niche for itself, or is it just more of the same?

I personally have a long history with 2D side-scrollers. So many of my favorite gaming experiences from the golden age of the SNES and Genesis are of that classic mold, and even today (with the genre only marginally existent) the right developer can blend conventions both old and new into a truly sublime gaming experience.

In the case of the Shank games from EA and developer Klei, this is absolutely the case. The best way I can describe Shank 2’s world to you would be to compare it to a sick and twisted version of a Saturday morning cartoon. In fact, if you’re familiar with the excellent Batman and Superman animated shows from the late ’90s- you’d be safe picturing something along the lines of that.

Of course Shank is a hell of a lot bloodier than the aforementioned superhero romps ever were. This is more like if there was a Punisher cartoon. On HBO. That aired late at night. Pretty much right from the start of the game, Shank is uber-violent, gory, and even a little darkly comic.

Though I played the first Shank a while back, I hadn’t forgotten about why this game works so well. It’s so over-the-top violent that, at times, it can’t help but be funny. And while the story might not exactly be Tolstoy, it has some genuinely cool moments and the dialog (for the bosses and Shank himself) ranges from absolutely badass to absolutely lol-worthy- and it’s very much on purpose.

The basic story is that Shank is heading home after his last adventure. He’s riding along in a rickety old bus full of other folks when they get stopped at a checkpoint and he has to do what he does best. From there Shank finds that a ruthless regime has taken hold of his country and burned his town to the ground. They’ve kidnapped, stolen, and destroyed… and now they’re gonna get stabbed. A lot.

And speaking of stabbing, S2 hits the graphics bullseye dead on. Nothing is overly detailed and realistic, so don’t look for that, but is instead a comic book come to virtual life. When I mentioned those DC comics animated series’ before, I mean that a lot of the designs for the characters are like that- clean and cartoony, but with an edge to them. The levels themselves are a little different though.

Most of them almost have a hand-painted look. They can be washed out at times and have extremely basic color schemes, but that’s kind of the charm. The tone of the stages gives the action a grindhouse feel that fits in very well with the subject matter. And the contrasting styles don’t conflict, which is pretty important. Actually, they gel quite nicely with the sprites absolutely popping off the backdrops.

Voice acting and music is all very ‘in tone’ as well and does a good to great job depending on who’s doing the speaking. Oddly enough, I thought Shank himself was only middle of the road. His vocals just didn’t sound tough enough for me… if that makes any sense. Definitely take a listen to the baddies though, as they throw out some great lines- especially when you lose! Some of it is very funny stuff.

Shank 2’s control scheme is all classic side-scrolling. If you’ve ever played a 2D action game, you’ll be right at home. He can carry three weapons at once: a heavy, a ranged, and grenades/molotovs/mines. Oh, and of course he always hangs on to his trademarked ‘shanks’- the twin slicers are there and available at all times and I found them to be my main enemy killing tool as they’re fast and don’t really leave you unable to move at a moments notice. I should add in here that you can also grab quite a few weapons from off of the ground as you go. None of them were anything all that great though and after a while I thought I might as well just stick with the standard loadout I picked before I loaded up the mission.

Other than the variety of hardware, there isn’t much to shake things up too much. You move left to right (or down to… um… up) and eliminate everything in your path. Occasionally you’ll rescue a hostage or pick up some collectables, but stabby-stabby is the basic idea.

This all might come off as a little too simplistic, but there’s a ton right with Shank 2 and it’s an extremely satisfying playthrough. There are a few twists for variety’s sake, lots of collectibles and unlockables, and a whole pile of shanking and shooting to be done.

Especially if you’re into 2D, but even if you just like a good action game, Shank 2 is a terrific entry into this classic genre. Yes, it’s little more than what the first game did, but when it’s this much fun, that’s not a bad thing by any stretch.