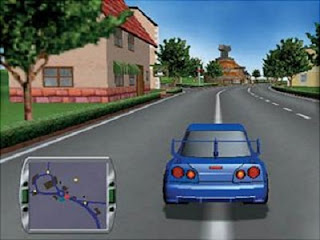 Road Trip Adventure is rather cute. It’s not a work of art by any means, but it’s an entertaining little racer with plenty of longevity for people who get into it.

The game is based on Takara’s Choro Q racing car toys, also known as Penny Racers in the west.

These cute little cars were pull-back spring propelled toys, and were indeed very popular back in the day.

They were also known for their variety and collectability. And this is the first real strength of Road Trip Adventure. The amount of customisation that is available is incredible. From tinkering with the aesthetic look of your car, to installing new parts that improve performance, there’s a lot of upgrades to be bought in this game (200 or so, in fact). Those parts cost money, which is where the “Adventure” in the title comes in.

The main part of the game is, weirdly, an open world. The idea is that you drive from town to town, doing a couple of odd jobs for other cars (there are no people in this world, just cars), and then entering and winning races. This earns you money and then unlocks harder difficulty challenges. 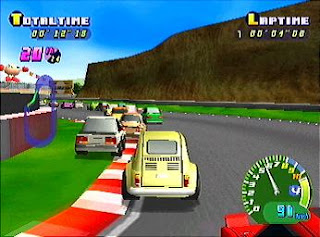 I’m not entirely sold on the open world. It’s pleasant enough to drive around, but incredibly sparely populated – you’re lucky if there’s even one other car driving around the same town as you. While that in itself isn’t as bad as it would be as, say, a GTA game, the lonliness of driving around empty (and big) areas becomes wearying after a time.

The races themselves seem to have attracted the entire population of the game world, though. Any given race pits you against 24 other opponents. These opponents are largely dumb, and indeed half of them are prone to getting themselves stick on scenery and the like, but because the other half tend to stick to the perfect racing line, there’s some challenge to be had in overtaking large groups of racers to come out in first.

The tracks are nicely varied and exotic. One moment you’re racing around a plain, traditional circuit, the next you’re hurtling through a ninja hideaway. The developers have tried to take advantage of the toy car theme to make an interesting game, and the occasional water section, jumps and shortcuts do create a varied experience over the surprisingly numerous tracks for a PS2 game. 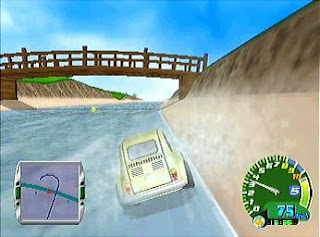 The only thing that really lets the game down is its physics. As long as the wheels are on the road the game plays fine (though you’ll need to be a little patient; until you’ve bought some steering and break upgrades, the steering is horrifically sticky). When there’s a jump involved things become very strange. I’ve seen cars tossed almost into orbit after jumping up a few stairs, and I’ve personally had trouble keeping control of the camera when I’ve gone through with a jump. Thankfully the bugs are rare because jumps are reasonably rare, but it’s a weird sight nonetheless.

Aside from a few criticisms, it’s hard not to enjoy a game that is so intent on being fun. It’s a slow starter, because the under-equipped cars really do control horribly, but once you get through that and into the higher classes of racers this is a fairly competent, cute little racing game, and indeed something we don’t see a whole lot of any longer.