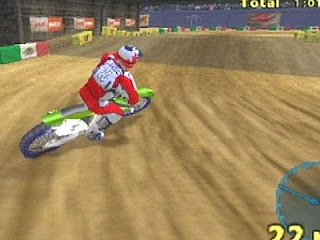 I have always had a bit of a soft spot for motorcycle racing games. I remember falling in love with Road Rash back on my PlayStation. In Twisted Metal, I was always about Mr. Grimm and his motorcycle. Still, MX World Tour was a title I never had the chance to try out on my PlayStation 2, so I get to approach the title with fresh eyes and no real nostalgia. That’s a shame too, because my guess is this release on the PlayStation Network is aimed at the nostalgic, because they may be willing to look past the flaws in this game.

The initial graphical impression is not good. The visuals are dim and grainy. I still have a PlayStation 2 around, and titles like Final Fantasy X, XII and God of War remind you how good games can look on this platform. Here the visuals are just not as impressive. The textured road is okay, but it does not really stand out much from the grass off to the side. Some tracks have spectators in the stands as well, but they only add a splash of color and nothing to the actual animation. The landscapes themselves do not see a lot of variety either, and while that may be true to the sport, it all just feels a bit lifeless and bland. 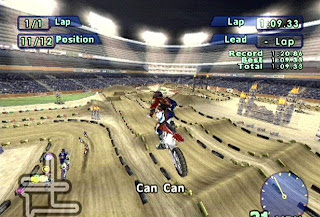 The good is that the racing action actually rolls along at a pretty good pace with little tearing or slowdown, and given that each track has twelve riders on it, that helps the cause. In fact the actual racing is not all that bad. It is a bit on the simple side – you gas, you break and you can clutch while on the track and while in the air you can tilt and lean some. The hills are easily the highlight for me – I love getting airtime in racing games, and you do get that here frequently, which can be fun. In particular I enjoyed being launched into the air right next to other riders as you try to jockey for a sound landing. The hills on the track really are the game’s strongest racing element because the uneven track does lend an element of unpredictability to the races.

There are actually quite a few levels with both indoor and outdoor action. My preference is the outdoor tracks. They just feel a bit more entertaining than the indoor ones, where the visuals are no more impressive. There are over thirty tracks in total though, so there are at least quite a few different ones to see. 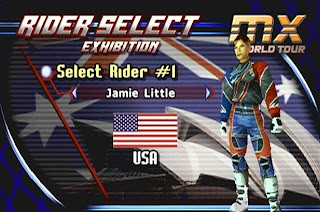 The crashing is an interesting point for me. I never see the computer crashing unless I cause it, and that usually only happens in crowded corner turns. They race an almost perfect race from a technical standpoint. Luckily crashing on here, as your rider ragdolls off of his bike and down the track several dozen yards, is not terribly detrimental to your progress. I recall being at the front of the pack, crashing, and resuming at 3rd, and then crashing a bit later and still being in the thick of it. This is a stark contrast to a lot of racing games where a crash or two can set you back considerably, but here when you crash, the reset time is actually pretty short.

There are quick races you can enter, but the career mode is probably the most entertaining route. You can customize your racer and your bike, which does help make things a bit more interesting. Honestly though, there really is not enough here to keep coming back for more.

It is not just that MX World Tour has aged poorly, but I have my doubts it would have held up all that well back when it was originally released. Unless you have some sort of nostalgic spot in your heart for this title from back on the PlayStation 2, it is tough to recommend this title when there are so many other better racing titles out there.

– Nick H runs his own blog, in addition to freelancing for Digitally Downloaded. Be sure to check it out:  Chalgyr’s Game Room