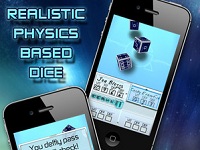 I’ve played a few of the Gamebook Adventures series of iPad games, and they’ve been universally of a high quality. The newest one in the series, Infinite Universe doesn’t do anything really different in terms of mechanics, but it is a very different story, worth a new look for fans of the previous games.

This one is so different because it’s in a science fiction setting, rather than the pulp fantasy of the previous games. This means art of bold, striking colour, laser guns aplenty in the text, and weird events that couldn’t possibly exist.

If you haven’t played a choose-you-own adventure game (and to be fair, if you’re younger than 20, that’s likely), they’re text only affairs. You’ll read a couple of paragraphs that describes a scene within a larger story. You’ll then typically have two or three different choices. Some will lead to your death, others will result in combat. Still others will reward your with treasure and the like. 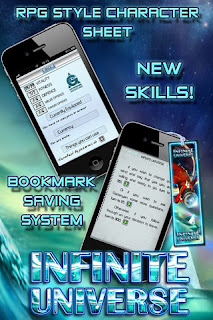 Combat is a simple affair of rolling dice. The better your equipment, the more dice you roll. The idea is to roll higher numbers than your opponent, which will allow you to damage him/ her/ it. Or alternatively, save yourself from taking damage. Gamebooks are noted for an unforgivable difficulty level, and successfully navigating through the game will require you to avoid combat where possible.

It terms of narrative, like the other Gamebook Adventure games, this one is well written. It’s also huge, so you’ll need to use the in-game maps to understand the universe and the locations you’re going to visit. For the first time in the series, it allows you to choose between a female and male protagonist, and the story is slightly different each time. And, like every good choose-your-own adventure game, there’s not necessarily a great indication of which path through the story is the “correct” one. Failing and dying, restarting and playing through again is a rewarding experience that makes these games quite lengthy in terms of content.

The interface, art and animation (which is limited to the dice rolls for the most part) is of a consistently high standard. Eight Gamebooks in, Tin Man Games have settled into a nice rhythm, and while we’re now at the stage where we’d like to see Tin Man take things a bit further (animated cut scenes would be cool for the important moments), it’s hard not to appreciate a game where the simple things are done well; and with tight storytelling and effective gameplay mechanics, this game gets the basics done right.

It’s also worth noting that for the first time, this Gamebook is available as a free download, and players can pay for additional chapters. So if you’ve been on the fence with these games before, here’s your chance to try before you buy.