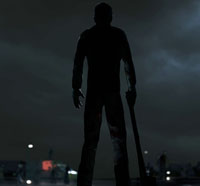 I’ve mentioned a couple of times in past articles that I don’t like some of the directions modern horror games are going, such as Resident Evil 5. Action heavy, there is little of the tension and even desperation that the atmosphere of a low powered survival horror game can bring.

So credit to End Night for trying. This really is a game where survival is part of the challenge. A top-down adventure game, the idea behind End Night is to walk around a city completely overrun by undead, completing a few missions and trying to figure out how to survive.

It kicks off with your hero guy inside a building that’s rather safe. There’s an injured guy on a bed, with a human guy standing next to him, playing doctor. Your role is to go find a cure from nearby houses. The plot is deliberately thin and barely explained, as the game wants you wading in the undead, not reading text. 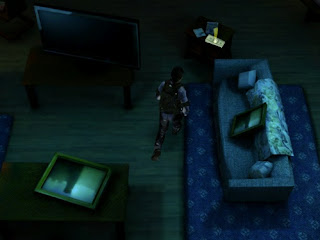 Unlocking the door and leaving that safe house will expose you to periodic attacks by the swarms of undead. If you can’t recover what you were looking for in your little sortie from your “castle,” the undead will overwhelm you, as your weaponry lacks the firepower or ammunition to deal with wave after wave of them. But never fear, death isn’t necessarily a bad thing. As you play the game, you’ll collect points. These points roll over to a new game if the hero dies, giving you the opportunity to upgrade weaponry which in turn makes the new attempt a little easier.

This way you slowly but steadily make progress through the game, and it’s just as well that death isn’t necessarily a bad thing, because otherwise the deaths can occasionally get frustrating. The action is far too zoomed in for a game of this style. Exploring can be frustrating, and it’s hard to tell the direction in which enemies are coming. Given the enemies come on so quickly, it’s often hard to even get a shot away before they’ve hit you. 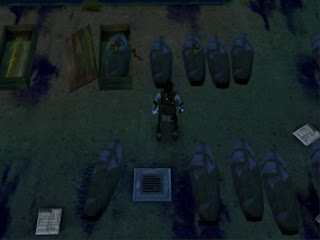 This design decision also confuses me because there’s no aesthetic reason to have the action in so close. The visual style of the game is quite bland, and the character models (especially the monsters), and low on the detail. It might have been wiser for the developers to scale back the zoom, for both playability and aesthetic reasons.

Other than that though, the game controls well, keeping the on-screen buttons to a minimum while allowing for plenty of action. Given how split-second some actions need to be (such as locking a door while the walking dead are sprinting after you), it’s just as well the developers got this right.

And that’s about it. End Night keeps things simple, repetitive and bite-sized. While it’s not exactly a horror epic, it does try hard to capture a bit of the tension and stack the odds against the player, just like a good horror game should, and largely succeeds.