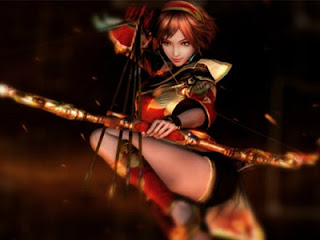 Tecmo Koei does it to me every single time. They release a Dynasty Warriors game. I play it. I get addicted and I can’t wait to play the next one. There’s always just enough new stuff added to the basic formula to not only justify the purchase, but get me hooked in all over again.

The first big selling point for Dynasty Warriors Next is the fact that for the first time we have a console that is able to match up to what Tecmo Koei wants to capture with this series. They want an epic storyline with massive battles and big time fireworks. The PSP wasn’t able to produce the fireworks, and while the 3D of the 3DS in Samurai Warriors Chronicles made for some breathtaking cut scenes, the gameplay itself was limited to battles with small groups of soldiers. With the Vita Tecmo Koei has been able to take adventage of a big screen for the spectacle, and the internal grunt to allow you to be fighting hundreds of impressive character models simultaneously. And, as a result we have a game that is in every way a console experience.

(Be sure to check out what sister site, Otaku Gaming, thinks are the best Warriors games of all time)

Also as typical for a Warriors game, there is a lot of game on offer. There’s the main campaign mode which, as expected, takes you through the epic stories of the Chinese “Three Kingdoms” era of history. Based on a historical novel “The Romance of the Three Kingdoms,” this is a story filled with interesting characters, epic themes, romance, betrayal and bloodshed. While the Warriors games are never going to be considered entirely historically accurate, and certainly on the battlefields there are all kinds of liberties taken to allow a player to slaughter 1000 enemies singlehandedly, there is enough there to tickle the fancy of anyone with an interest in fantasy, and for students of history it is always fascinating to see how these heroes and villains are portrayed in the media. 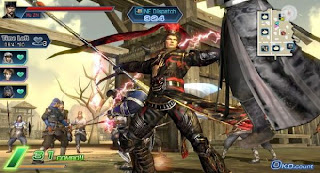 In addition to that mode is a conquest mode, which plays out a little bit like the board game, Risk. There, China is divided into regions, and your goal is to conquer the entire area. To do this you select a territory to attack, which will cut to a typical Dynasty Warriors battlefield. Succeed and you’ll take over the territory. Then it’s your opponent’s turn. You can block your opponent from invading your territories by making sure they’re powerful enough that he can’t attack at all. There’s some light strategizing on offer there, which will add some longevity after the campaign is done and dusted.

And then there are a few minigames that make use of the Vita’s capabilities. There’s a horse race that uses the gyroscope. There’s a shooting-gallery type game, and then there’s the ability to take a photo and add a Warriors character to the picture. None of those minigames will hold interest for long, but with online leaderboards for them there is a bit there for the dedicated.

The on-field fighting doesn’t break too many Warriors conventions – it’s still about tapping combinations of square and triangle to slaughter thousands of enemies, and then building up the super attack to help deal with the enemy commanders. For this game there’s an extra ultra-super attack that will be unleashed with a tap of the front screen which will clear out anything in the heros’ vicinity. 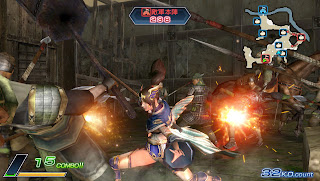 The goals of this game is slightly different, too. Recent Warriors games – Dynasty Warriors 7 and Xtreme Legends, for instance, were objective led on a fluid battlefield – players would be prompted to head over to location X to deal with situation Y before the enemy can enact plan Z. For Dynasty Warriors Next, the goal is always the same – take down the enemy leader or capture his castle. To do this though, first you need to capture strategic locations that can have a variety of effects – from providing supplies (powering up the army that controls the spot), to allowing downed heroes to rejoin the battle, to periodically unleashing a barrage of missiles to clear large areas of enemies. By capturing these points of interest, the battle will slowly tip in your favour, which will allow you to assault the enemy headquarters without being overpowered.

The one disappointment was that Tecmo Koei decided to make use of all the toys the Vita offers. Every so often you’ll be “ambushed,” meaning the game will break away to a minigame where you’ll need to tap the enemies before they can hit you, or swipe the screen to deflect arrows. Other times you’ll get pulled into a duel with an enemy commander. This plays out a little bit like a simplistic Punch Out or Infinity Blade – you’ll need to either tap the screen or swipe on it in reaction to the enemy commander’s actions to counter them and inflict damage on him. While I can appreciate why a developer might want to play with the toys a new console allows them, these minigames are really a frustrating and unnecessary distraction from the broader action.

Dynasty Warriors Next is an absolute triumph though, and takes advantage of everything the Vita promises. It’s a pity that the game isn’t better understood in the West, because it’s a real showcase for the new technology and deserves, as much as Uncharted, to be a system seller.